On September 5, a report was broadcast in Germany TV broadcast “Mainz Report”.

Title: “Torture in the mass animal husbandry is rarely punished”.

Because the report is in German, I translated the most important points of this.
I have to say, it was an exceptionally good report.

“They come at night, secretly filming in stables, documenting suffering and death.
It is pictures like these that have been used to uncover animal protection scandals in recent years. But that should be over now. 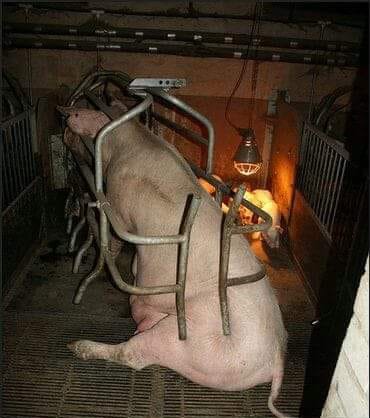 This calls for Federal Agriculture Minister Julia Klöckner and can be cheered for it on the farmer’s day. The new state minister of economic affairs, Julia Klöckner, makes a good impression at the farmer’s day. Because there, she demands something that many farmers have been longing for: animal rights activists, who secretly film in stables at night, should be punished harder. The Minister emphasizes that animal welfare controls are the task of state-appointed official veterinarians.

Federal Minister of Agriculture:
“I tell you, state-appointed controllers are better than self-proclaimed stable policemen.”
By law, she wants to penalize the entry into stables. Finally, it is the duty of the veterinarians to ensure animal welfare compliance: But how well does veterinary monitoring work? How consistently are animal abusers punished in agriculture?

In addition, there are current figures from the Federal Government: Statistically livestock owners in Bavaria must expect every 48 years with a control, in Schleswig-Holstein all 37th. In Lower Saxony, the country with the highest animal density, every 21 years!!!

A veterinarian tells us that she often discovers animal welfare violations.
“Very often it is sick and injured animals that are not treated, animals that were neglected, with high-grade inflammation.”
After I reported these violations, I was removed from the controls and transferred to the office”!!

This reproach also raises a slaughterhouse veterinarian:
“I was also recommended by the competent authority not to do my job as rigorously, otherwise my job as a veterinarian would be endangered. The slaughterhouse is a big employer, a good taxpayer, and animal welfare falls by the wayside. ”

But have those responsible been punished so far?

In 2013, pictures from this piglet breeding plant make headlines. Animals in too narrow boxes, with open wounds, piglets born there, and die immediately.
Clear violations of the Animal Welfare Act. The animal rights organization ARIWA refunded criminal complaint. Follow investigations. The company got editions, had to rebuild partially.

2015. Although the investigation is still ongoing, these recordings show again animals in too narrow crates, injuries.

In 2017 and 2018, Greenpeace will release these images from the plant. Refunds Advertisement, because of too narrow crates. Again, it is being investigated.

But the procedure, according to the criminal complaint of Greenpeace, has been discontinued.

Because:
A prosecutor explains that it cannot be determined, whether these pigs are suffering from the eye inflammation significantly.

Furthermore, it is said: In view of the low degree of “excrement high status”, the suffering in these animals in the same stall is not yet significant. The preliminary investigation was terminated.
Another stable. Pictures were also submitted,  about hitting the piglets on the ground.

The prosecutor believes that the piglets are likely to suffer significantly from being hit on the ground.

However, this is not to be proven beyond doubt by the pictures. Whether the animals were killed for no reasonable reason, he could not judge. This preliminary investigation was also terminated.

And our minister? She has no time for an interview. According to the ministry, countries have been asked to step up animal welfare controls !!!
Our conclusion: Those who violate animal protection law must not fear any punishment. Rare controls, veterinarians under pressure, prosecutors look away.
And soon, the entry into stables to make such pictures is to be punishable – if it goes by the will of the minister.

And according to the desire of the meat and milk Mafia!

One thought on “State and Meat Mafia: Team Work!”