Like all other “useful” animals, camels are also transported: to markets, slaughterhouses or racing camels for sporting events.

The animals are exposed to terrible suffering during transport. Their protection plays almost no role.

Camels are  brutally exploited as ‘racing’ camels in sport and as ‘farm animals’ for the production of milk, meat and leather.
Just like all other useful animals, camels are also in terrible conditions transported.

Image: Animals Angels-When unloading without a ramp, the danger of falling is great.

In addition to short-distance transports, the animals are also transported between countries by truck or ship over long distances.
Some transports take several days and some of the camels have to travel long distances on foot. International animal welfare standards are ignored.
The camels are beaten on the transporters, pulled from their trucks by the lugs, ears or tails and thrown. 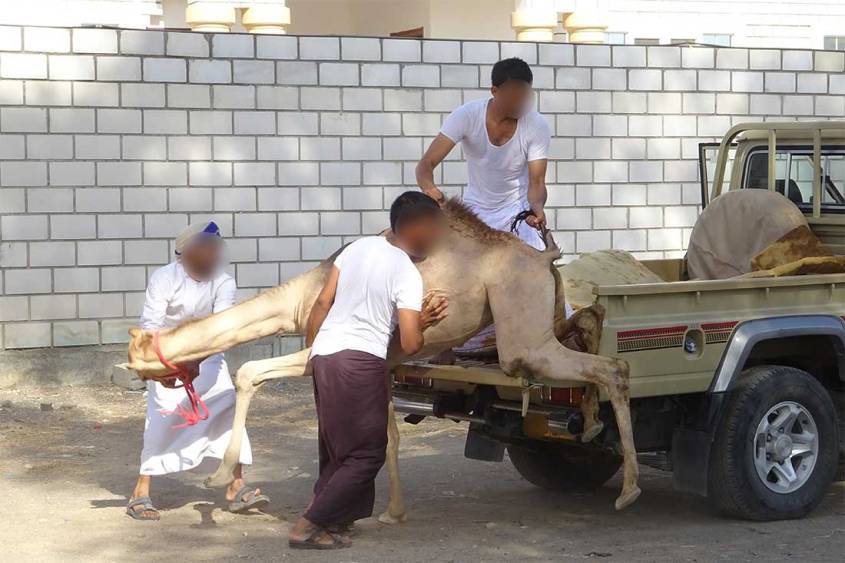 Image: Animals Angels-When loading vehicles without a ramp, the camels are brutally dragged on the head, tail or limbs of the vehicles.

Due to the brutal methods the animals suffer from bruises, bruises and open, bleeding wounds, stress and panic.
Without consideration also sick, injured, emaciated and weak animals are transported.

Image: Animals Angels-Often simple pickups are used, which are not suitable for transporting animals. In addition, the camels’ legs are tied tightly together

The animals are transported during the greatest heat.

Image: Animals Angels-Often extremely overloaded vans: The camels are transported tied up in a sitting position and can not move, partly for trips of more than 30 hours.

Since 2017, Animals’ Angels has been uncovering catastrophic conditions in many countries in the Middle East and advocating changes in the camel theme internationally.
Here is the last report from Egypt:

In June, an Egyptian television station reported on the daily animal cruelty on the camel market in Birqash (Egypt) and denounced it publicly.
Then the government intervenes for the first time: animal protection posters are hung on the market according to our model and arrested several people who have dealt with violent with the camels.

The arrests have had a deterrent effect, but we know that they alone are not a means to make long-term improvements.

Our vets, Omar and Eslam, monitor the situation on the ground. Today, for the first time, traders come to them and want to know how to load the camels without violence.

There are 37 ° C!
Omar and Eslam have to treat some camels who are completely exhausted.

Image: Animals Angels-Pull front, beat behind. The shipments on the markets are chaotic and brutal.

Overall, the mood is tense, the workers are afraid to be photographed, but at least as long as Omar and Eslam look, they do not beat the camels and accept the advice of our team.

Now we have to stay on the ball: we have to be there as often as possible so that this first spark of improvement does not go out. We are also in contact with the Ministry for a joint animal welfare project on the market.

More about our project for the camels in Egypt: https://www.animals-angels.de/projekte/tiertransporte/kamele.html

My comment: Around 6,000 BC, people in lesser populated Egypt started livestock farming.
Today they do the same thing, after 6000 years, and not just the Egyptians.
But Egypt is the country with one of the oldest civilization history, which it sells very well as a tourist attraction today.
And that is the tragic: to still sell the “pyramids” to the tourists as a wonder of the world, and not to realize that the greatest wonder for Egypt is their own society, which has still remained in horse and camel slavery, as in ancient times of the pharaohs.

One thought on “The terrible camel transports in Egypt”