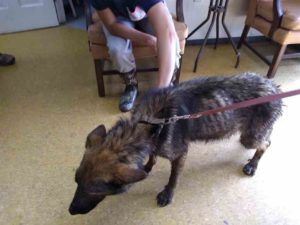 A landlord reportedly condemned nine dogs to certain death in a trailer park he owned. Benjamin James Reece faces animal cruelty charges for allegedly abandoning the dogs for 11 days. The individual who made the horrific discovery described these canines as “extremely emaciated, living in piles of their own feces.”

While most of the innocent animals are on the road to recovery and to new forever homes, one dog unfortunately passed away from the seeming neglect. The suspect has apparently shown consistent reckless disregard for the welfare of others. Tenants in his trailer park claimed that when he abandoned the dogs he also abandoned his obligations to them, even shutting off their water supplies.

Reece should face the maximum punishment for his allegedly inhumane and callous actions. Sign this petition to urge the legal system to do its job in condemning deadly neglect.

This summer saw the arrest of Lisa Jean Wade for allegedly abandoning and nearly killing her pet monkey. Just a few short weeks later, Benjamin James Reece faced even more substantial charges for allegedly neglectful animal cruelty. The fact that eight of Reece’s nine reported canine victims survived is a fortunate stroke of luck that could have very easily had a much more tragic outcome.

Please exercise due diligence in this case. Do not let animal cruelty become a troubling new norm in Hawkins County. Send a message that careless neglect is every bit as much a serious crime as deliberate violence and abuse.

Ensure that if found guilty, Mr. Reece receives a punishment fitting the gravity of his alleged crimes.

One thought on “USA: Man who reportedly left emaciated dogs to die in their own faeces must be punished. Petition.”