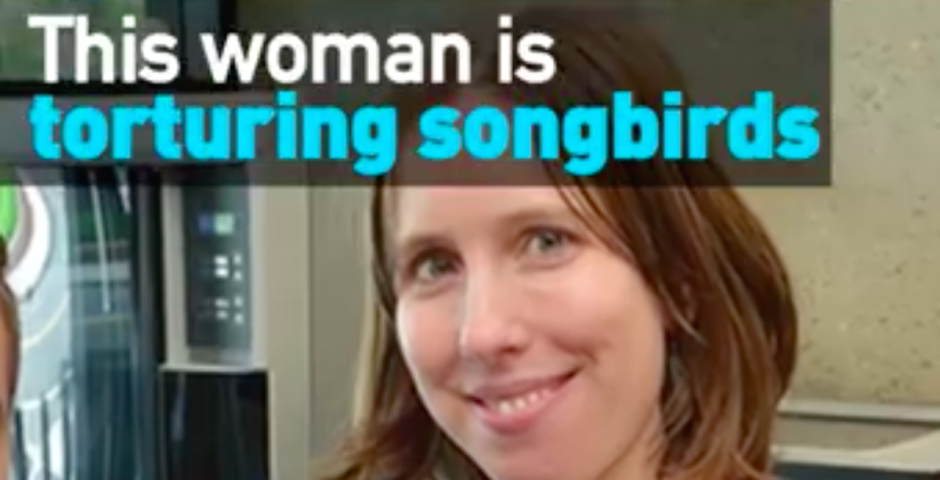 PETA has obtained new records revealing that serial bird killer Christine Lattin, now at Louisiana State University (LSU), has embarked on another installment of her continuing effort to rid the world of joy with a new round of pointless experiments that involve killing and dismembering birds. This time, it appears that they may violate local bird protection laws.

Lattin has tormented and killed birds in bizarre experiments since 2008. The mountain of bird carcasses left after past experiments have led to such banal “discoveries” as “birds do not like captivity” and “birds think crude oil tastes icky.”

That her sadistic experiments have not contributed to the promotion of science, however, is apparently no matter to the Louisiana Board of Regents, which awarded her more than $117,000 to torment and kill 184 wild-caught sparrows over a three-year span that began in June 2019.

In Lattin’s latest experiments, she will capture, band, and fit with digital ID transmitters house sparrows unfortunate enough to choose to breed in nest boxes at the LSU College of Agriculture.

After she releases them, one group will be tormented with the sounds of a predator, such as a hawk, while the other will hear more pleasant sounds, such as nonpredator birds or frogs.

At the end of the breeding season, Lattin will capture all the birds and their babies.

None will be spared, as she will kill them all. She’ll cut their heads off and examine their brain tissue. She’ll look for changes in a particular gene brought on by the predator sounds and compare it to the control group.

In another experiment, Lattin will catch dozens of sparrows and pump 20 males and 20 females with sex steroids for a week before running the same predator/nonpredator routine on them. These birds will endure the same fate as the others.

This is what passes for science, and it’s unfortunately in line with Lattin’s previous cruelty, which included feeding birds crude oil, wounding their legs, plucking large amounts of their feathers, and causing them stress and fear by confining them to cloth bags and giving them drugs that damage their adrenal glands.

House sparrows are one of the most widespread and abundant songbirds in the world today.

They’re also monogamous, usually only breeding with one partner for a season, and both sexes participate in incubating and feeding their young.

In fact, the city of Baton Rouge, where LSU is based, is designated as a bird sanctuary where trapping and molesting birds are prohibited. Lattin’s experiments appear to violate this ordinance and certainly violate the will of the residents of Baton Rouge that birds be protected from harm.

Lattin must not continue her reign of terror on wild birds. Killing these sensitive, trusting beings who have chosen to live in such close proximity to humans is unjust and wrong.

Please, take action below and urge LSU to end her cruelty.

And I mean…In some ways, Lattin’s story is nothing new. PETA and other animal rights groups have hounded researchers for decades in hopes of shutting down animal experiments in the United States and elsewhere.

Oversight systems in laboratories favor experimenters and often fail the animals they are supposed to protect. Birds are excluded from the only law that offers any protection for animals in laboratories.
No experiment is illegal.

That’s why Lattin has gotten away with killing at least 250 birds, as well as chemically damaging birds’ adrenal glands, wounding their legs using a biopsy punch (with no painkillers), rattling their cages every two minutes, restraining them in a cloth bag and feeding them crude oil. And she’s looking for more victims.

These experiments cause massive suffering and aren’t applicable to conservation, human health, or other birds. This is a crime funded by taxpayer money.

For its part, PETA says it has no intention of ending its campaign. “We’ll stop the moment Yale says ‘No more,’ and not 1 minute before that.  We looked at Lattin because her experiments are so horrible,” says Kathy Guillermo, a senior vice president at the organization in charge of the Lattin campaign. “If she was a 60-year-old male with tenure, we’d been doing the exact same thing.”

Of course! This is the language of all psychopaths who have no regrets and no moral concerns about their actions.

One thought on “USA: the case “Lattin””