The first floating cowshed was built in the Netherlands. In the middle of the largest deep-sea port in Europe, Rotterdam, almost 40 cows are kept on the two-story building.
Animals keep falling into the water.
We are demanding the closure and have contacted the German embassy in the Netherlands.

Floating Farm – Unique in the world

The operator of the floating cowshed boasts that only two employees are needed to operate the barn, because robots are used to milk and clear the cowshed automatically.
The feed reaches the animals from the lower floor via conveyor belts.
Everything would run independently.
Floating farms are the future of agriculture.

On the company’s website, the animals are advertised with short transport routes, beautiful pictures and great views.
A cow has a completely different eyesight than we humans and perceives the water more as a black hole and thus as a threat.

It’s all about profit

We reject the entire project and don’t see the future in it.
It makes no difference to the cows whether they are exploited in a barn on land or in water.
In addition, it is all about profit here too.

In the “showcase project”, for example, the calves are torn away from their mothers after birth and when the milk yields of the cows they go to the slaughterhouse.
Of course, there is nothing about that on the PR website.

Nor is it mentioned that probably the main reason for this globally unique project is that you can only build a stable in the Netherlands if you own land yourself.
In addition, there is a limitation of fattening houses compared to the number of inhabitants.
This also means that more and more Dutch fattening operators are coming to Germany and building stables.

We have made and published drone recordings of the floating stall.
It is the first time that such images have been created.
With the pictures we want to show how absurd this project is.
Nobody needs a floating barn, especially not the animals. 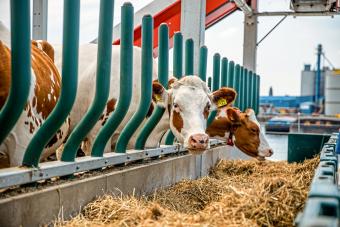 There is always criticism.
So the Dutch party Partij voor de Dieren (PvdD), which also campaigns for animal rights, is trying to get a majority in the city council to close the farm, unfortunately unsuccessfully so far.
But now the situation could change.

Cows fall into the water

This is the second time that a cow has fallen into the water.
The animal, which weighs 600-800 kilograms, had to stay in the cold water for several hours until it was finally rescued by the fire brigade.
The first incident occurred in December 2020, and even then it was difficult to rescue.
In both cases a door or barrier was left open. The operator has repeatedly violated his duty of care here, it is a miracle that both cows survived.

This is how you can help the animals 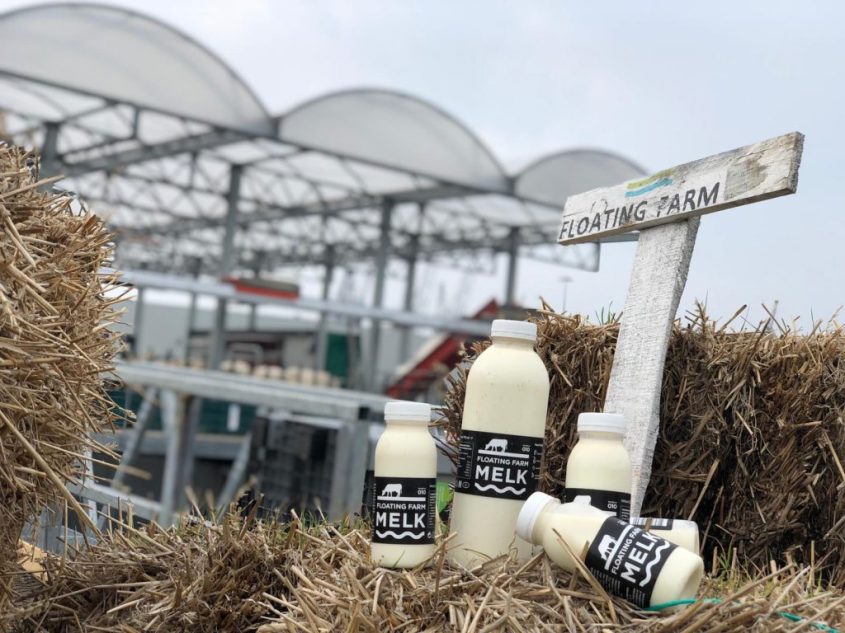 “We recommend a plant-based way of life anyway, because this way all animals on land and water can be helped,” concludes Jan Peifer.

And I mean… Instead of thinking about how we can feed the world without animal suffering and without the destruction of the environment, there are other ways of breeding even more animals and now even on the water.

The little Netherlands, by the way, is the second largest agricultural exporter in the world!
From 2018 to 2020 alone, exports rose from 90 billion to 104 billion euros.

So there is definitely no need for more cattle breeding, whether on the mainland or in the water.
It is not the case that agriculture today is primarily used to feed the local population.
It is an industry that mainly produces for EXPORT.

Seldom has a bad business in animals been sold so professionally as in this case.
But that’s not enough – this is also celebrated by all media as an innovation and funding is demanded, maybe soon the lobby group of the EU will step in with subsidies in the project.
Because the businessmen of the floating farm are planning to build a floating chicken coop with around 6000 hens for the next year.

The last thing we need is more factory farming.
What we urgently need is to reduce the growth of human animals.