Legalized trophy hunting has corrupted Swedish hunting management to such an extent that the Swedish Environment Agency is actively undermining the purpose of the Convention on International Trade in Endangered Species (CITES)!
It issues export permits for all trophies to attract foreign hobby hunters. 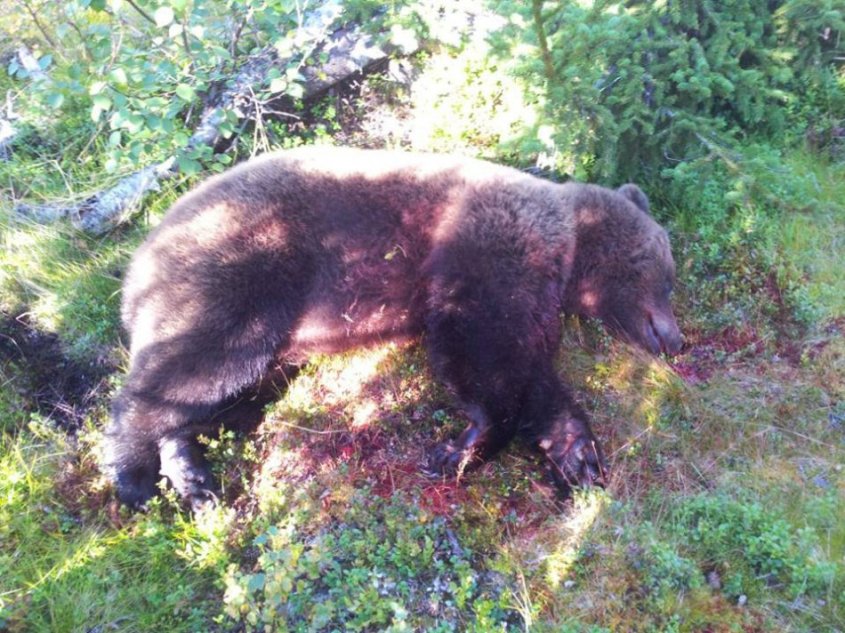 As of August 21, more than 500 brown bears are to be killed before their annual hibernation.

The European Commission and the international animal welfare community must address Sweden’s repeated violations of the Habitats Directive and ban the unethical trophy hunting of large predators, which is escalating in Sweden.

Even so, the Swedish Environmental Protection Agency (EPA) increases the quota for legal trophy hunting every year.
Almost 7,000 bears, lynxes, wolves and wolverines have been legally killed since 2000.
In the first half of 2021 alone, permits for the killing of more than 720 predators were already issued in Sweden.

The cruel and unethical trophy hunting with which the Swedish Federal Environment Agency wants to regulate the populations, however, violates the aim and purpose of the EU species and habitat directive (92/43 / EEC).

Sweden blatantly abuses these stringent protection laws by adjusting its own national loopholes and unrestrainedly interpreting the limited hunting exemptions in order to sustain the trophy hunting industry.

The Swedish bear population is currently less than 2,900 wild animals

This month, more than 500 bears will be targeted for trophy hunting in seven Swedish counties, although 107 bears, including females and young, have been killed in helicopter hunts this spring.

Bears that wake up from hibernation and get too close to reindeer are condemned in advance by the reindeer owners.
Even so, the reindeer industry receives significant government subsidies to accept the predators.
Martial and usually illegal methods such as snowmobile chasing, 24-hour hunting and being shot down from helicopters are approved by the district administration.
It is even possible to track females with young animals in their burrows.

These brutal practices against predators are increasing every year in northern Sweden.
A region where illegal hunting is widespread, sometimes with extremely sadistic methods, as the hunting scandal in Norrbotten in 2017 showed:

Torturing lynx in traps, strangling lynx and bears on metal wires in trees, provoking dogs on trapped and injured animals.
This proves that legalized trophy hunting neither creates respect for wildlife nor reduces conflict.

Fatal disturbances in late summer and fall are critical for all bears as they prepare for healthy October hibernation.
In general, bears get most of their calories from plants and berries, and they need to accumulate enough fat to survive the long Scandinavian hibernation of 5-7 months.
This vital feeding period is called “hyperphagia”. 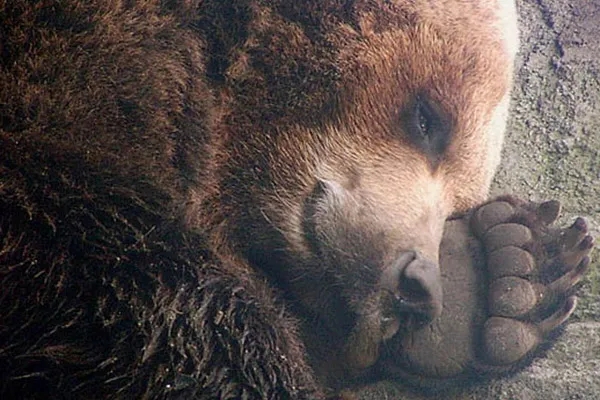 Bears need to put on significant weight each day, being active and eating for up to 12-20 hours a day.
The pressures are even greater for female bears, as they must give birth in their burrows during hibernation and the mothers must be able to feed their young with high-fat milk.

The government in Sweden never uses the precautionary principle to protect wildlife.
The devastating forest fires of 2018, during the bear’s hyperphagic phase, did not stop trophy hunting for 300 bears.
Two animal welfare organizations – The Hunting Critics and Djurens Rätt – appealed to the Director-General of the Swedish EPA and local governors to stop the bear hunt.
The roll call was ignored everywhere with the indication that they were on vacation.

The severity of human disturbance to carnivores, which can have many other unpredictable consequences for an endangered species such as the brown bear during this vital and hectic feeding time, is completely ignored in the hunting permits of the district administrations and never recognized by the highest competent authority, the Swedish Environment Agency Asked a question.

Hunting during the period of hyperphagia causes a type of disruption and stress that is different from other human activities in that it takes place in larger and more inaccessible areas where the presence of humans and hunting dogs is otherwise uncommon.
Since bears are very sensitive to stress and can die from overheating, the Swedish method of chasing every bear with two large dogs is extremely cruel.
The collateral damage to all bears and cubs, even if not killed, is openly ignored by the hunt managers.

Every year many small bears and yearlings that weigh less than a small child are “accidentally” killed in the frenzy of trophy hunting.
The hobby hunters will never be held responsible.

In 2000, only 56 bears were allowed to be hunted, and today in 2021 the number of bears hunted has risen to 501. Jämtland County notorious for discriminating against and killing predators, is leading this year’s killing games by issuing hunting permits for the entire area, this time for killing of 200 bears in one season!

In Sweden, bears are cruelly lured with bait so that they can be hunted and shot at close range with dogs.
This unethical method is also used to follow the bears live in advance with installed cameras, because the baits are laid out in mid-July.
Hobby hunters pay large sums of money and can choose their trophy bears in advance.
They then use semi-automatic weapons and aggressive predator dogs. It is not uncommon for bears to be wounded by hobby hunters and then reported as “missing” even though they are seriously injured.

“Bear hunting is the most popular form of big game hunting on the planet,” writes trophy hunting campaign leader and journalist Eduardo Gonçalves in his book Killing Game, The Extinction industry.
Safari Club International (SCI) is one of several hunting organizations that awards prizes to the hunters who kill the most animals for “sport”. The SCI record book contains species such as brown bears, lynxes and wolves, all of which can be hunted in Sweden.

The majority of European citizens polled are against trophy hunting, as revealed in the recent report, “Trophy Hunting by the Numbers: The European Union’s Role in Global Trophy Hunting”, by Humane Society International Europe.
The report also reveals the downside of Sweden’s betrayal: Sweden tops the list of EU countries importing and exporting CITES-listed species between 2014 and 2018, which has contributed to an almost 40% increase in imports into the EU.

Sweden has significant problems with illegal hunting and wild animals are not protected from cruelty as they are not covered by animal welfare laws. In Sweden, the country of origin of the “ombudsman”, there is no ombudsman or representative for animals, neither for wild nor for tame animals.

Nevertheless, the Swedish environmental authority promotes the perfidy of killing large carnivores for sport and leisure purposes and repeatedly issues licenses for the devilish practice of trophy hunting on a large scale. This is the ultimate betrayal of sentient and endangered creatures like brown bears, lynxes, and wolves.
The NGOs’ objections to trophy hunting are repeatedly ignored in court

WWF Sweden is silent about trophy hunting, although in 2019 it received a legacy worth more than 10 million euros from a single testator, which was specifically intended to protect Swedish predators.

The irony is that his estate consisted of forests in counties where bears, lynxes, wolves, and wolverines are most heavily persecuted.

What would he have done if he had known that the properties should be sold to the compromised Swedish Environmental Protection Agency?

Or that the financing of a controversial project in Namibia, which is about trophy hunting, also comes from WWF branches in Europe – including Sweden.

And I mean…Obviously the moral development does not run parallel to the prosperity of some Scandinavian countries.
A disgusting shit, there is no other way of calling it.

It’s not just about the number of bears, but about the fact that people in a highly developed country in the 21st century think that killing and destroying other animals is fun

Until now we thought that trophy hunting of endangered species is a business for some developing countries because they are poor and trophy hunting gives the poor at least a starvation wage.

Now we read that some highly developed, rich countries, which actually always stood as the model in the standard of living and development, like Sweden for example, visit hunting guests from abroad and legalize the shooting of endangered animals.

The hunter’s lust for murder does not even stop at species that are strictly protected by the Washington Convention: Because the import of hunting trophies is considered a private pleasure and “non-commercial”, it is usually exempt from import bans and legal with permission – also in Germany, where the importation of trophies of internationally protected species is still allowed.
Trophy hunting is actually killing animals for pleasure, and wildlife killers are encouraged by governments to do so, to confess and even to be proud of it!

Polar bear hunting is a legal sport also in Canada, which is also a highly developed country.

People pay a lot of money to go hunting on guided tours. They usually go polar bear hunting in groups of seven and most come back with trophies.

The last thing a civilized nation like Sweden could need is shooting animals for trophies and posing for a selfie with the killed bear or owning a bear head over the fireplace.

The Neanderthals were more civilized and had more respect and tolerance than some nations.