Protesters arrested as part of “enforcement actions” could have their pets taken into care, Canadian authorities have warned
Canadians taking part in demonstrations against Covid-19 mandates were threatened with inadvertently relinquishing their pets if arrested by the police, authorities warned on Thursday.

According to an announcement on the Ottawa-By-law Twitter account, anyone arrested at demonstrations as part of “enforcement actions” by the government could have their animals placed in “protective care” for a week if they are unable to look after them.

The suspect must pay for the animal’s care. After eight days, if arrangements have not been made, the animal would be considered “relinquished.”
A tweet from Ottawa’s regulatory service included a photo of a dog hanging out of a truck window.

The ongoing protests in Canada began weeks ago as a convoy of truckers protesting vaccine and quarantine mandates for border crossings, but the movement has morphed into much larger demonstrations against Canadian Prime Minister Justin Trudeau’s handling of the Covid-19 pandemic. 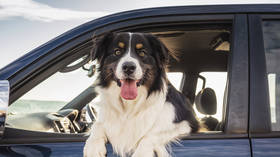 “Attention animal owners at demonstration If you are unable to care for your animal as a result of enforcement actions, your animal will placed into protective care for 8 days, at your cost. After 8 days, if arrangements are not made, your animal will be considered relinquished. pic.twitter.com/OkbXc8RE3c”
— Ottawa By-law (@OttawaBylaw) February 17, 2022

The pets warning is the latest effort by the government to break up the protests, which have created “illegal blockades,” according to Trudeau, at busy border crossings and in major cities.

Trudeau recently invoked the Emergencies Act, giving police more scope to deal with protesters.
Canada also ordered a freeze on crypto donations to the Freedom Convoy, which has gained support from high profile pundits like Jordan Peterson.
The threat to seize pets has renewed criticism of the Canadian government, with some arguing that they are going too far.

“One possible, explicit punishment for participating in a peaceful protest in Canada — beyond freezing your bank accounts — is that the state will take your pet and, after 8 days, declare it “relinquished” if other “arrangements are not made.” https://t.co/9hrVSyHNlF&#8221;
— Glenn Greenwald (@ggreenwald) February 17, 2022

Police have issued warnings to protesters continuing to demonstrate, increasing their presence this week in cities like Ottawa, according to CBC.
Police in Ottawa also began erecting fences in front of government buildings, including Parliament Hill and the Senate on Thursday.
Police have also been issuing written warnings to protesters, promising harsher action in the future.

And I mean…The Canadian truck drivers are particularly impressed because the “Prime Minister” Justin Trudeau wants to prescribe the injection without exception.
This little thing leads to one of the largest motorized protest marches of all time in Canada.
We are on the side of the protesters and support them.

Trudeau’s policy is a much more dangerous virus than the SARS-COV-II virus and all its variants, which have now been totally wiped out.
Some comments copied from the article:

My god, how low can this government sink? Trudeau has no ethics, no morals, no brains. How can he treat people like this? I detest him and all he stands for!

Trudeau is taking personal bank accounts and now their dogs. At some point, extreme, unsustainable Liberalism always turns into a far left controlled dictatorship and attacks it’s own people, just like the United States.

Threatening to remove their Kids and now their Pets, tyrants will be dictators, no doubt about that.

Yes! That’s just how dictators are; they use all means to achieve their goals!