Oscar the cat had both his back legs chopped off when he had a argument with a Combine Harvester.  Noel – the ‘Supervet’, made some new back legs for him.  Here is his story.

Here we are looking a little more into animal welfare in the Ukraine.

We give a very brief summary with associated links for more.

For the past 20 years, Naturewatch Foundation has been actively running projects in Ukraine, working with animal protection NGOs and municipalities to implement humane and sustainable stray dog population management schemes, following the recommendations of the World Organisation for Animal Health (OiE).

Amid the political turbulence in Ukraine, some people are dedicating their lives to the wellbeing of dogs, cats, birds, bears and other animals in the country. Photographer Thomas Machowicz has been documenting the work of the Kiev Animal Rescue Group (Karg), which provides emergency services for injured animals.

Kyiv Society for the Protection of Animals

UKRAINE – On February 7, 36 Members of Parliament introduced a bill to ban fur farming in Ukraine. The bill is initiated by MP Andriy Pomazanov with support of Fur Free Alliance member organisation Unique Planet.

14,000 sheep drowned or were crushed to death on a capsized live export ship.

254 have been found alive, and we think lifelong sanctuary is the least they deserve afer all they’ve been through. Do you agree?

Being involved with animal welfare / rights is not usually much of a happy place to be for many of us. As you can tell from the numerous articles on this site, there is very little in the way of positive news. Sadly, bad, sad unhappy news is often all we can give.

I have been in contact with Venus as always, and as from today, tomorrow ? – I am going to try and make posts a little more positive. I cant turn bad news into good, positive news; if only !, but I am going to try a slightly different approach with you, our friends and fellow animal activists, to see if we can sometimes make things in each post a little better.

It may be music, the odd bad joke, or a cartoon which I (we) hope will bring a smile to your face sometimes. We need something different sometimes, because all this continual bad stuff is not good for us, believe me; been there and worn the T shirt.

Changes will not be big, but some may be slightly different, interspersed amongst various posts. I am going to try it and see if we all feel any better with that approach.

Your feedback, which is always happily received, is always welcome – please use the reply links with any post to tell us; good or bad. This is your site as well as ours, and we welcome comments and views; plus any links you may wish to include.  The odd bit of music or the odd joke does not mean that we do not care as much; we are here for one reason only; as the site says, to be a  World Animals Voice.  Nothing changes there.

‘They survived all this, they deserve a nice old age,’ says head of rescue team 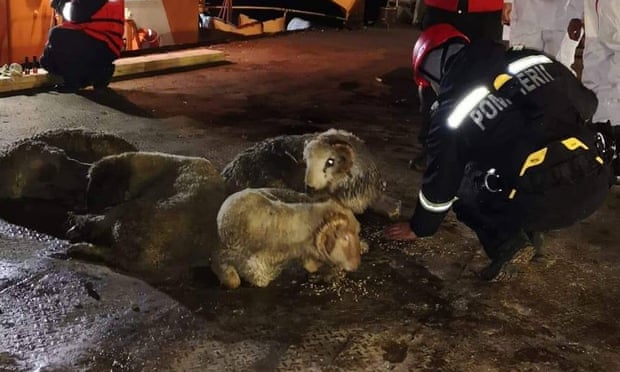 A comfortable retirement to an all-you-can-eat grassy field seems the least that the 250 surviving sheep from the Queen Hind disaster in the Black Sea deserve. But there is still some debate over their fate, according to animal campaign groups working in Romania.

More than 14,600 sheep were on the ship, heading to Saudi Arabia on a busy animal export route, when it overturned coming out of the harbour on Sunday afternoon. All of the crew got away safely, but most of the animals are now believed to be dead.

Rescue teams, made up of animal groups and Romanian vets and police, are still working in the ship, cutting holes through the walls to reach inaccessible sections. But conditions are getting worse and the chances of finding any surviving animals are diminishing.

“You have to climb along the dark corridors, wade through the water and clamber over the sheep bodies while you search,” says Kuki Bărbuceanu of the Animal Rescue and Care charity and the Four Paws animal welfare organisation. Bărbuceanu is a veteran disaster relief operator who specialises in animal rescue.

“And then you have to get back out, but this time you are carrying a 50–60kg sheep. It is pretty exhausting work.” The smell is getting worse, and although some crew are wearing gas masks, Bărbuceanu says that interferes with the hard physical labour of carrying out sheep.

He has been working on the ship since Tuesday, when he and his crew reached the harbour. Alongside them have been vets from the veterinarian authority ANSVSA, and Romanian emergency workers. As of Thursday afternoon, 250 sheep had been rescued from the ship.

However, the ultimate fate of the surviving sheep is still in question. They are currently in quarantine and being looked after by the export company, Maria Trading. There have been some anxieties expressed by activists that the Saudi import company that bought them will reclaim them, and that they will be put on the next export ship.

Campaign groups are seeking to take the animals and find them sanctuaries where they can munch away to a peaceful old age. A statement from Maria Trading to the Guardian confirmed that they are giving food and shelter to the rescued animals and added: “The Romanian veterinary health authority is the only concerned party which will decide when and where the rescued animals will be transferred.”

Requests for comment to the veterinary authorities have not yet been returned.

“It’s what they deserve,” says Bărbuceanu. “They survived all this, they deserve a nice old age.”

Legislation currently going through the Romanian parliament would tighten regulations around the country’s live export trade, which has grown fivefold since 2000. Romania is one of the main routes out of Europe into the Middle East.

The live export trade continues to grow both inside and out of Europe, despite continued public opposition. European live animal exports rose from a value of $1bn (£800m) in 2000 to $3.3bn in 2018.

Meanwhile, MEPs in the European parliament have agreed to debate the live export trade in December, Dutch MEP Anja Hazecamp (pictured below) told the Guardian.

“There has been a lot of talk so far, but not enough action,” said Gabriel Paun of Animals International.