WHO experts have been warning about the outbreak of a super epidemic for years.
But we don’t need to hear it from WHO when we see such videos.

How can a meat eater continue to consume its meat when it sees the conditions of the animals that supply it?
No matter whether the consequences of such an attitude are: corona, swine flu, bird flu, or cancer … There is shit in their flesh, but they don’t want to see it.

Under the low quality standards for food, no meat eater is sure that he has not eaten spoiled meat too often.
In fact, spoiled meat in meat factories around the world does not seem to be the exception, but the rule.

But no health minister would ever warn consumers: this product can contain dangerous amounts of pesticides, arsenic, antibiotics and hormones.
This animal from which your meat was made has lived in its excrement in the middle of bacteria, parasites and dangerous viruses and may be transmitted to you.
Wash your hands is the motto!
Because every minister is also part of the meat mafia and the business must go on. 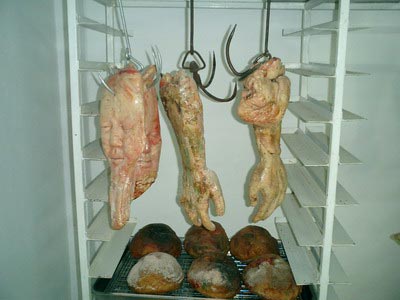 Today, in the 21st century, we are not even able to shut down the tapes of all slaughterhouses and forbid eating corpses, even though we know that WE are the ones who can benefit from it.

One thought on “Give us our daily meat…”