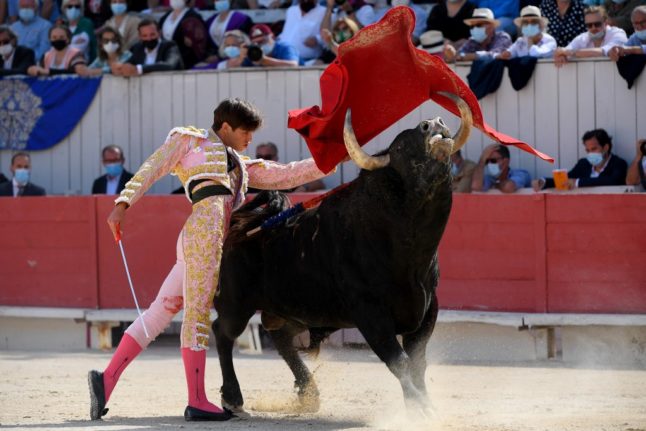 French matador El Rafi performs a muleta pass on a fighting bull in the arena of Arles, southern France, on June 6, 2021 (Photo by Nicolas TUCAT / AFP)

As thousands of bullfighting aficionados gather across southern France for traditional summer ferias, opponents of the practice are reviving their fight for an outright ban, confident that public opinion is finally on their side.

“I think the majority of French people share the view that bullfights are immoral, a spectacle that no longer has its place in the 21st century,” said Aymeric Caron, a popular former TV journalist and animal rights activist who was recently elected to parliament as part of the hard-left France Unbowed party.

For years, critics have sought a final legal blow against what they call a cruel and archaic ritual, but none of the draft bills presented have ever been approved for debate by National Assembly lawmakers.

French courts have also routinely rejected lawsuits lodged by animal rights activists, most recently in July 2021 in Nimes, home to one of France’s most famous bullfighting events.

But Caron, based in Paris, told AFP that the time was ripe for a new proposal given growing concerns about animal welfare, with a draft bill to be submitted this week.

“I do indeed hope this bill will be debated in parliament in November… it would be a first,” he said.

The prospect seems all the more likely after France Unbowed won dozens of new seats in recent elections, helping to strip President Emmanuel Macron of his centrist majority in parliament.

The goal is to modify an animal welfare law that allows exceptions for bullfights — as well as cock fighting — when it can be shown that they are “uninterrupted local traditions.”

Such exceptions are granted to cities including Bayonne and the mediaeval jewel of Mont-de-Marsan in southwest France near Spain, where the practice has its origins, and along the Mediterranean coast including Arles, Beziers and Nimes.

For Caron, “it’s not a French tradition, it’s a Spanish custom that was imported to France in the 19th century to please the wife of Napoleon III, who was from Andalusia,” the countess Eugenie de Montijo.

That argument is unlikely to convince the jostling crowds who packed the streets of Bayonne for the bullfighting feria that ended Sunday, a sea of fans clad all in white except for bright red bandanas or sashes.

“The people who want to ban it don’t understand it. Bullfighting is a drama that brings you closer to death… You’re afraid, but that’s a part of life,” said Jean-Luc Ambert, who came with friends from the central Auvergne region.

Like many other fans, his friend Francoise insisted that bullfighting is an art as much as a sport, where “a man puts his life on the line, while respecting the animal.”

“We’re not trying to convert anyone — I just want the people against it to leave us alone,” she told AFP.

The guest star of the Bayonne feria, Spanish matador Alejandro Talavante, did indeed find an appreciative audience, with the crowd demanding the award of the bull’s ear for his performance.

It’s a conflict that echoes the widening rift in France between rural dwellers steeped in deep agriculture traditions, and Parisians and other urban residents accused of trampling on the country’s cultural heritage — often derided as “the Taliban of Paristan.”

Andre Viard, president of the national bullfighting association, shrugged off the threat of a ban.

“This comes up in every parliamentary session,” Viard told AFP of Caron’s efforts to find allies for the France Unbowed initiative.

“We tell the other parties: Why do you want to be associated with a bill that attacks a cultural freedom protected by the Constitution, and territorial identity?”

The debate echoes similar opposition in other countries with bullfighting histories, including Spain and Portugal as well as Mexico, Colombia and Venezuela.

In June, a judge in Mexico City ordered an indefinite suspension of bullfighting in the capital’s historic bullring, the largest in the world.

Caron is banking on support from across the political spectrum, including top members of Macron’s party such as the head of his parliamentary group Aurore Berge, who was among 36 lawmakers who called for a bullfighting ban last year.

An Ifop poll earlier this year found that 77 percent of respondents approved of a ban, up from 50 percent in 2007.

“More and more people are concerned about animal suffering, including in bullfights,” Claire Starozinski of the Anti-Bullfighting Alliance told AFP, adding that many people don’t realise that the bulls are actually killed.

“I know there are MPs from other parties who will support me, and have said so,” Caron said — though he admitted that more mainstream lawmakers such as Berge might be reluctant to join his leftish campaign.

“Is she going to remain true to her convictions, or make a political calculation that prevents her from supporting me? That’s what will be at stake in the talks over the coming weeks and months.”