British Transport Police (BTP) have issued two photos of men they want to identify after a hunt ran amok and held up trains on New Year’s Day.

In an appeal to the public they have asked anyone who recognises the men to contact BTP.

The Banbury Guardian covered the story at the time. At that time Warwickshire Hunt denied that a hound had been struck by a train, claiming ‘all hounds had returned safely to kennels’, but BTP has confirmed that a dog was, indeed, hit. 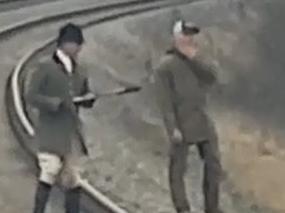 One train involved in the initial incident and was left waiting on the track while Network Rail workers tried to get the hunt to leave the railway, which they refused to do. Overall 21 services were affected because of the backlog of delays. Network Rail confirmed that the trains have forward facing CCTV and their examination of the film has resulted in today’s appeal.

A spokesman for BTP said: “Officers investigating an incident of trespass in Warwickshire are today releasing these images in connection.

“On January 1 shortly before 1pm, officers were called to the lines in Claydon following reports of a group of trespassers on the tracks. Thankfully, no injuries were reported, however a dog was sadly hit by a train.

“The incident caused significant delays and cost to the railway. Officers believe the people in the CCTV images may have information which could help their investigation.