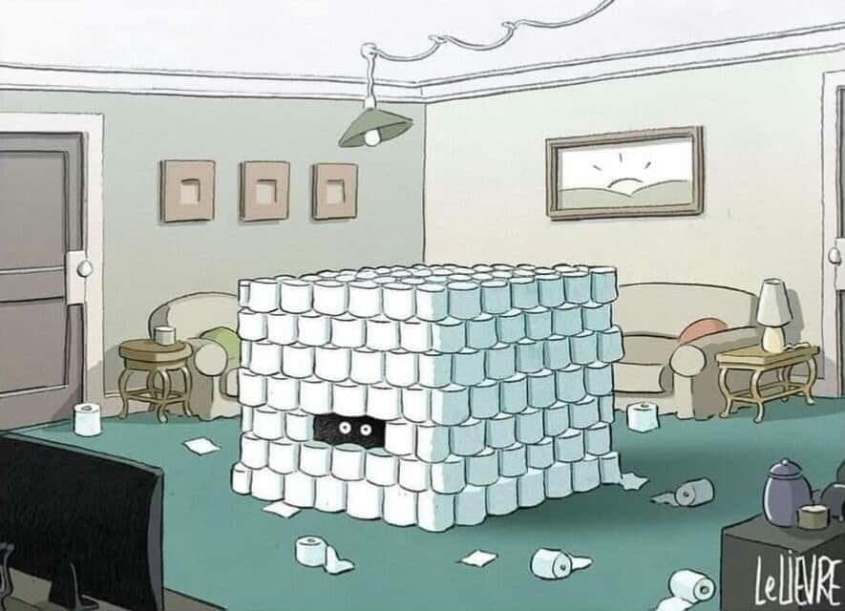 Those who are exposed to COVID-19 propaganda for several hours a day will hardly be able to grasp a clear thought out of sheer panic.

This is certainly also the goal of strictly coordinated propaganda, which we particularly appreciate and inevitably finance, especially through the public media.
Their job is to subtly deprive people of the opportunity to think independently.
They themselves call it high-level information and education.

Insofar as, contrary to expectations or due to technical breakdowns, there are moments of light within this panic sprinkling, the normally gifted person begins to ask questions internally.
Questions that it is better not to open up and therefore mostly to keep quiet and secret. This is the only way to be reasonably safe from the destructive criticism that everyone is exposed as soon as he issues questions or facts that contradict the official line.

The economic side of the pandemic

Let us turn to the economic side of this crisis, following the rampant pandemic.
An officially prescribed crisis, which becomes more significant and more serious with every compulsory and restrictive measure called.
It was not for nothing that unlimited financial resources were provided for every cough, well before panic mode was raised to today’s level.
This can be seen as a signal that the government, either way, is expecting a huge crash.
Rightly so, because the financial and economic system has been overdue in this regard for years.

Corona is just the gentle and innocuous door opener, the hand puppet or Trojan to play a real drama for people.
All with the goal of reaching the next level on the way to total control of the crowds.

The latter is pretty much the hardest attack on the remaining Human liberties.
We are experiencing, so to speak, the final dispute. It is about whether people will be able to take control of their own destiny, freely and individually, in the future.
Or whether, as in the past few decades, people remain only the productive livestock of an elite class.
In this context, it can be said that it is a battle against globalization that is pursuing exactly this agenda of human livestock.
The EU is only a small size and unfortunately nothing else than “not pro person” … only “pro … fit”

The Europe-wide failure of the entire economy will immediately lead to the death of all affected economies. We could say they die on Corona themselves. This virus is simply the ideal scapegoat.
Of course, this is not entirely true, as these economies are now dying because of the planned measures to combat a small virus, the importance of which is more than controversial.
But the propaganda already helps the little creature to the power it has now been given. Nothing will change the result. Economies will die along with COVID-19, the weakest first.

It would be better, in general, to start thinking about a new system in terms of education, economy and the state. A more stable system that does not have to be driven against the wall every three generations like now.

In this regard, at least the previously mentioned small elite would like to read later  in the history books that not their greed destroyed everything, but a small, cute virus called COVID-19.

And I mean...The whole world smells of disinfectants, in the subway, in the supermarket, in sports studios, in the café..

No cinemas, no soccer, no museums, no theater, no libraries, no visitors from relatives in the hospital, no parties, even no church …

Everywhere empty shelves, noodles are gone, rice is gone, cans are gone, toilet paper is gone, even the vegan range that no one wanted before is gone.

The empty shelves in the supermarket are reminiscent of the old days in the former GDR, when people abused the “totalitarian” system of socialism at the time and only dreamed of fleeing to the West in order to finally buy everything their hearts could desire.
And now fucking capitalism is failing worse than its enemies at the time.

After the swine and bird flu failed so miserably, the right one finally seems to have been found.
There will soon be a global slaughterhouse for human animals that will cut all savings in half.
We have the explanation for this: it was the evil virus!

One thing is hopeful and makes the situation bearable: the corona is an animal-friendly virus!