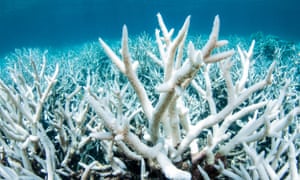 Warmer sea temperatures – particularly in February – are feared to have caused huge coral loss across the world’s largest reef system.

Scientists say they have detected widespread bleaching, including extensive patches of severe damage. But they have also found healthy pockets.

The reef system, which covers over 2,300km (1,400 miles), is a World Heritage site recognised for its “enormous scientific and intrinsic importance”.

Last year, Australia was forced to downgrade its five-year reef outlook from poor to very poor due to the impact of human-induced climate change.

On Thursday, the Great Barrier Reef Marine Park Authority said its latest aerial surveys had shown that the severity of bleaching varied across the reef.

But it said more areas had been damaged than in previous events.

“The reef had only just begun recovering from impacts in 2016 and 2017 and now we have a third event,” chief scientist David Wachenfeld told the BBC.

“Climate change is making the extreme events that drive those impacts both more severe and more frequent, so the damage in an event is worse.”

The earlier events hit two-thirds of the reef system, wiping out coral populations and destroying habitats for other sea life.

But Dr Wachenfeld said some key reefs for tourism – in the northern and central regions – had been only “moderately bleached” this year. This meant coral there would probably recover, he added.

“The reef is still a vibrant, dynamic system but overall, with every one of these successive events, the reef is more damaged than previously,” he said.

“We need to take these events as global calls for the strongest possible action in climate change,” he said.

Global temperatures have already risen about 1C since pre-industrial times.

The UN has warned that if temperatures rise by 1.5C, 90% of the world’s corals will be wiped out.