For our non European friends who may not be familiar with this, the beautiful and majestic ‘St. Bernard’ dog is always associated with the rescue of persons trapped in avalanches; on mountains etc in Switzerland. They are always shown carrying the Brandy barrel which contains the spirit which is given to rescued persons to ‘warm them up’.

You can see a few typical pictures below.

What with the Coronavirus now and what appears to be an obsession with having plenty of toilet rolls; even though dysentery is not part of the virus problems; people seem to have gone into overdrive to obtain piles of toilet rolls ! – why, don’t ask us – just a load of crap you could say !!!

So here is the latest fun pictures of the ‘rescue St. Bernards’; all kitted out with a toilet roll rather than the brandy barrel.

Here is further interesting information (from friends at Wikipedia – thanks !) on these beautiful dogs and their association with Swiss mountain rescue:

The Great St Bernard Pass (French: Col du Grand St-Bernard, Italian: Colle del Gran San Bernardo, German: Grosser Sankt Bernhard) is the third highest road pass in Switzerland, at an elevation of 2,469 m (8,100 ft). It connects Martigny in the canton of Valais in Switzerland with Aosta in the region Aosta Valley in Italy. It is the lowest pass lying on the ridge between the two highest mountains of the Alps, Mont Blanc and Monte Rosa. The pass itself is located in Switzerland in the canton of Valais, very close to Italy. It is located on the main watershed that separates the basin of the Rhône from that of the Po.

Great St Bernard is one of the most ancient passes through the Western Alps, with evidence of use as far back as the Bronze Age and surviving traces of a Roman road. In 1800, Napoleon‘s army used the pass to enter Italy, an event depicted in Jacques-Louis David‘s Napoleon at the Saint-Bernard Pass and Hippolyte Delaroche‘s Bonaparte Crossing the Alps, both notable oil paintings. Having been bypassed by easier and more practical routes, particularly the Great St Bernard Tunnel which opened in 1964, its value today is mainly historical and recreational.

Straddling the highest point of the road, the Great St Bernard Hospice was founded in 1049. The hospice later became famous for its use of St Bernard dogs in rescue operations.

The Great St Bernard Hospice (Italian: Ospizio del Gran San Bernardo, German: Hospiz auf dem Grossen St. Bernhard, French: Hospice du Grand St-Bernard), is a hospice or hostel for travellers in Switzerland, at 2469m altitude at the Great St Bernard Pass in the Pennine Alps. The border with Italy is only a few hundred metres to the south.

The first hospice or monastery was built in the 9th century at Bourg-Saint-Pierre, which was mentioned for the first time around 812-820. This was destroyed by Saracen incursions in the mid-10th century, probably in 940, the date at which they also occupied Saint-Maurice. Around 1050, Saint Bernard of Menthon, archdeacon of Aosta, regularly saw travellers arriving terrorised and distressed, so he decided to put an end to mountain brigandage in the area. With this in mind, he founded the hospice at the pass which later bore his name (it was originally dedicated to St Nicholas). The church’s first textual mention is in a document of 1125. The hospice was placed under the jurisdiction of the bishop of Sion, prefect and count of Valais, thus explaining why the whole pass is now in Swiss territory.

The St Bernard dog breed was created at the hospice from cross-breeding dogs, probably those offered by families in Valais in the 1660s and 1670s. The first definite mention of the breed is in 1709. The breed was originally raised to provide guard dogs for the hospice, before they became mountain rescue dogs. The St Bernards were specially bred and trained for the role of mountain rescue because they were sufficiently strong to cross deep snow drifts and had the capacity to track lost travelers by scent. The first evidence that the dogs were in use at the monastery is in two paintings dating to 1690 by Salvatore Rosa.

The dogs are often depicted as carrying a small flask of brandy around their necks to revive travelers. While this appears to have generally been a 19th century myth,[1] there was apparently at least one dog that really did. In The Percy Anecdotes, by Thomas Byerley, published in 1823, the following anecdote appears, and was often quoted in other books in the 19th century:

The breed of dogs kept by the monks to assist them … has been long celebrated for its sagacity and fidelity. All the oldest and most tried of them were lately buried, along with some unfortunate travellers, under a valanche [sic]; but three or four hopeful puppies were left at home in the convent, and still survive. The most celebrated of those who are no more, was a dog called Barry. This animal served the hospital for the space of twelve years, during which time he saved the lives of forty individuals. His zeal was indefatigable. Whenever the mountain was enveloped in fogs and snow, he set out in search of lost travellers. He was accustomed to run barking until he lost breath, and would frequently venture on the most perilous places. When he found his strength was insufficient to draw from the snow a traveller benumbed with cold, he would run back to the hospital in search of the monks….

When old age deprived him of strength, the Prior of the Convent pensioned him at Berney, by way of reward. After his death, his hide was stuffed and deposited in the museum of that town. The little phial, in which he carried a reviving liquor for the distressed travellers whom he found among the mountains, is still suspended from his neck.[2]

The last recorded rescue by one of the dogs was in 1955, although as late as 2004 eighteen of the animals were still kept at the Hospice for reasons of sentiment and tradition. In 2004, the breeding of the dogs was undertaken by the Barry foundation at Martigny, and the remaining St Bernards were transferred there from the Hospice. They remain a tourist attraction, and a number of the animals are temporarily relocated from Martigny to the Hospice during the summer months. 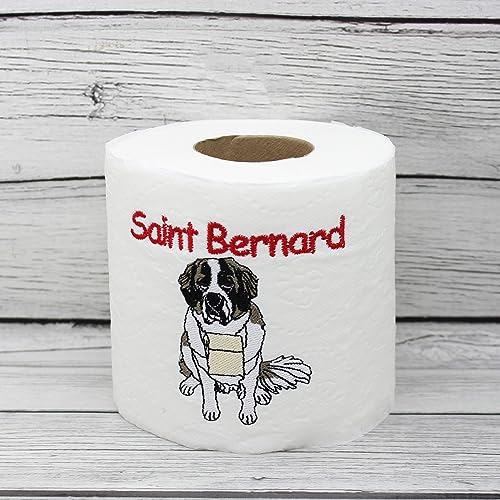