From ‘The Guardian’, London – brilliant as always.

Our (WAV) recent posts on this:

Thanks to Jane for the latest.

Concern mounts for welfare of more than 2,500 livestock on two vessels off Italy and Cyprus after bluetongue outbreak

Thousands of cattle remain stranded at sea on two livestock ships that left Spain in mid-December, as campaigners desperately seek veterinary support for the animals.

The two vessels were bound for Libya but owing to an onboard outbreak of the bovine disease bluetongue were refused entry at multiple ports, said Maria Boada Saña, a vet with Animal Welfare Foundation (AWF), which has been tracking the ships via maritime websites.

On 19 February the website myshiptracking.com showed one of the ships, the Elbeik, anchored off the coast of Cyprus, and the other, Karim Allah, off the coast of Sardinia. The vessels left the Spanish ports of Tarragona and Cartagena on 18 December respectively.

A spokesperson for Spain’s Ministry of Agriculture, Fisheries and Food said the ships’ situation had “nothing to do with the actions of the Spanish administration” and had left the country with health certificates and had come from areas free of bluetongue.

They added that officials were monitoring the vessels’ movements and were in contact with the World Organisation for Animal Health (OIE) and the European commission “to find a solution to the situation”. A spokesperson for the commission said the Spanish authorities were willing to receive both ships back.

Boada Saña said marine traffic websites indicated that the Elbeik had about 1,700 cattle on board and the Karim Allah almost 900. The Spanish authorities did not respond to questions about animal numbers.

Given the Karim Allah’s proximity to Italy, Manuela Giacomini, a Genoa-based lawyer who works with AWF, said she filed a request with the Italian health ministry asking it to perform an urgent veterinary inspection of the ship in collaboration with Sardinia’s port state authority in Cagliari.

Olga Kikou, the head of Compassion in World Farming EU, lodged a similar request that asked the Cypriot authorities to arrange an urgent inspection of the Elbeik.

Cyprus’s chief veterinary officer said the Elbeik was being monitored, adding that when the vessel approached Cypriot waters, the country’s authorities would “proceed accordingly with checking this case”.

Kikou, who is in Greece, said the most immediate priority was that veterinary services boarded the ships to “check the animals and euthanatise any that are suffering. The conditions inside the ship cannot be good after two months. And then a solution needs to be found between the different authorities to determine next steps for any animals that can be saved.”

An email from the the International Maritime Organization said its seafarer crisis action team was aware of the situation and that it was concerned for the “wellbeing of seafarers and the safety of navigation [and] in this case also the livestock”.

Asked for comment on the two ships, the OIE said in an email that it was “in contact with the concerned member countries and also with our regional offices” to “minimise negative impact on animal welfare during transport operations and emphasise the joint responsibility of all people involved in the different stages of the transport”.

Tilly Metz, the Luxembourg MEP who chairs the European parliament’s animal transport inquiry committee, said this was “yet another live animal transport scandal involving ships. After the 2019 tragedy of the [Queen Hind] ship, which capsized with 14,000 sheep on board, now allegedly over 2,600 bovines [are] stuck on two vessels wandering from port to port in search of help. How can it be that there is no contingency plan in case of diseases or other unforeseen events?”

Metz said a key animal transport problem was that time spent on the ship was considered “resting time” and not “transport time”.

“This means there is no limit as to how many hours animals can be on these ships: days, weeks, even months. Many consider this to be a legal anomaly and a loophole in the rules on the protection of animals during transport,” she added.

This case, she said, “proves again a ship is not a floating stable. It is an unnatural, often stressful, overloaded and understaffed environment, with inherent risks such as disease outbreaks, feed shortages and refusals to unload”.

Attempts to contact the ships owners and operators by phone were unsuccessful.

The EU Commission is suing Germany before the European Court of Justice for violations of current nature conservation law for years. 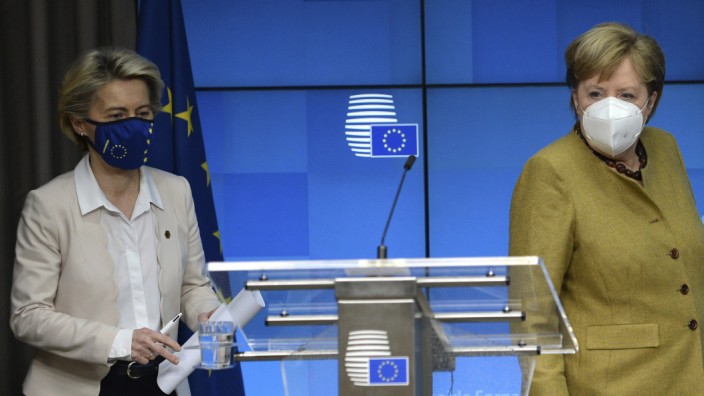 Among other things, Germany has “still not designated a significant number of areas as special protection areas,” the Brussels authority announced on Thursday.

It is about the implementation of the Flora-Fauna-Habitat (FFH) Directive for the conservation of natural habitats and the protection of wild animals and plants.

The core is the designation of protected areas in the EU states.

These include so-called conservation goals to protect or restore the population of species.

The EU Commission had already initiated what is known as infringement proceedings against Germany in 2015, but Berlin has not dispelled the concerns over the years.

The “deadline for completing the necessary measures for all areas in Germany” expired in some cases more than ten years ago, the EU Commission announced on Thursday.

The authority complained, among other things, that “the conservation goals set for the individual areas in Germany are not sufficiently quantified and measurable”.

The EU Commission is assuming that it was the practice in all federal states and at the federal level not to set sufficiently detailed and quantified conservation goals for all 4606 areas of Community importance.

This has “significant effects on the quality and effectiveness” of the measures.

And I mean…EU Commission sues Germany?

But the EU has to have a little understanding for Germany. After all, Germany only had 20 years to implement the directive!!

Only 6 years have passed since criminal proceedings were initiated.

It can be assumed that any failure to achieve the self-set goals will simply be sent to the next over time because the game with the time factor has still worked so far.

And speaking of the EU, by the way: it was the EU that ensured that the form of agriculture that is common in our country, i.e. one that is absolutely hostile to nature, was carried to all EU countries, to those countries that were previously Had nature, like Slovenia, Croatia, Poland or Romania.
Devastating!!

It would be a step forward if we did a Dexit.

This day of honor for the large marine mammals was initiated by animal rights activists on the island of Maui and has been celebrated there since 1980.
It coincides with the time when a large number of humpback whales roam the coast of Hawaii to give birth and raise their young.
The day is meant to indicate the threat posed by these majestic giants.

🐋 They are mysterious, intelligent, and breathe oxygen through their lungs – just like us, humans!

But the gentle giants of the oceans are in danger: illegal fishing, noise, traffic, and environmental pollution threaten the fascinating mammals.
Whales around the world need intensive protection so that we don’t lose them forever!

We keep fighting to save these animals from extinction!

when the ocean dies we die too! we all have to help to save our oceans and their residents.

Februdairy: A Desperate Attempt To Promote The Declining Dairy Industry

As public opinion continues to shift, increasing numbers of people are falling out of love with dairy products. Enter Februdairy…

Recent years have seen a significant shift in consumer attitude towards dairy, as more people understand the environmental, health and animal welfare issues associated with the industry.

The UK is now drinking 50 percent less milk than they were in 1974, according to a report by Agriculture and Horticulture Development Board (AHDB).

Dairy on the decline

The UK’s leading vegan campaigning charity, Viva!, has investigated countless British dairy farms and exposed the brutal reality of the industry – helping many people make the switch to dairy-free.

An increasing number of dairy-alternatives are widely available including cheeses, yogurts, milks, and chocolates. Most supermarkets have their own ranges of vegan food – proving these products are big business.

Although the milk market is much bigger, valued at over £3 billion, demand for cow’s milk is declining and plant-alternative sales have surged 10 percent over the past two years.

It’s undeniable, dairy-free sales are booming and show no signs of slowing down. Considering these factors, it comes as no surprise that the dairy industry is desperately trying to claw its way back into public favor.

So what on earth is Februdairy?

Februdairy is a social media campaign created by the dairy industry in a desperate attempt to boost sales and portray dairy in a more favorable light. This is the industry’s fourth annual campaign and is pitched as a direct response to Veganuary.

This year Veganuary announced a record number of sign-ups with a whopping 400,000 people going vegan for a month. Milk producers, pro-dairy consumers, and industry experts, are encouraged to create and share pro-dairy content during the month of February on social media using the hashtag #Februdairy.

When the campaign launched in February 2017, the vegan community commandeered the hashtag to highlight the darker side of the dairy industry, where pain and suffering is an everyday occurrence.

Social media has played an instrumental role in the rise of veganism. It’s clear vegans are well versed in using it as a platform to educate and inform others.

A slew of animal rights advocates and groups such as Viva!, Animal Equality, and Animal Aid, use Februdairy as an opportunity to expose the cold-hard facts surrounding dairy production .

This doesn’t go down well with the dairy industry….

He now shoots the four-legged family members of others.
He controls and instructs others in the forest
He pays no dog tax and is a dog expert
He gets a 25% new car discount
He tells other epidemiological tales of rabies, owls, and fox tapeworms
He rescues fawns and shoots them four months later
He is suing photographers who use telephoto lenses to disrupt wildlife

Norbert is a nature and animal rights activist