Animal Equality’s undercover footage has revealed animals suffering from prolonged pain in a Scottish Salmon Company slaughterhouse. The investigation, showing fish-killing processes, is the first of its kind to be released in the UK.

The Scottish Salmon Company supplies major UK supermarkets Waitrose and Co-op, alongside premium retailers, hotels, and restaurants. The corporation also has a global reach, exporting its products to over 20 countries across the world.

Today, we released our latest investigation. As the first of its kind showing undercover footage from within a Scottish salmon slaughterhouse, it is truly groundbreaking.

Several extremely serious animal welfare cases of abuse were witnessed. A significant number of salmon were filmed fully conscious when killed; others were thrown to the ground and left to languish.

The company that owns and operates the slaughterhouse has been linked to Waitrose and the Co-op.

Scottish produce is often perceived by consumers as synonymous with ‘higher welfare’ and ‘higher quality’ practices, yet our investigation shows that even with stunning machinery in use, there is chaos, confusion, and unimaginable suffering. 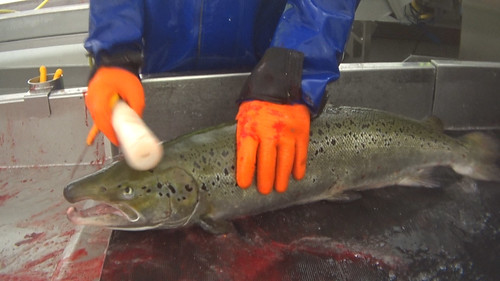 Despite a stunning device being in place in this facility, numerous salmon displayed consciousness at the time of slaughter, evidenced by flapping, wriggling, and grasping motions. 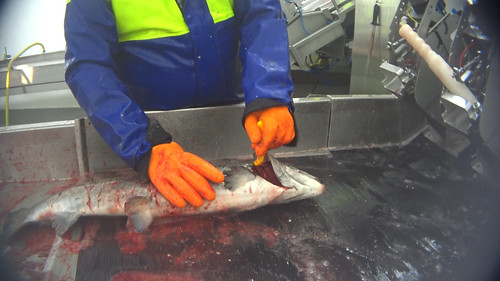 Many salmon’s gills were cut when they were still conscious, causing them to be in agony for up to several minutes as a result. 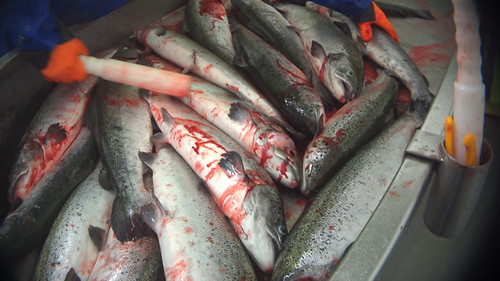 Some salmon were stunned with a club after their gills were cut, causing their blood to spray out. In some instances, conscious animals were clubbed as many as seven times.

END_OF_DOCUMENT_TOKEN_TO_BE_REPLACED

The town of Garmisch in Bavaria (Germany) is located near the mountain “Zugspitze”, at 2,962 m the highest mountain in Germany.

The city consists of two places, the second is Partenkirchen, and both were united in 1935.

This district of Garmisch-Partenkirchen is planning to protect the cultural landscape there as a UNESCO World Heritage Site.

That wouldn’t be bad either, because it is a beautiful natural area, one of the few still existing in Germany, which is endowed with wild natural beauty.

In this context, the “tethering” of cattle should also be classified as a cultural asset worthy of protection.

Animal Rights Watch sees it as an attempt to misuse the title “World Heritage Site” to legitimize traditional cruelty to animals.

The affected animals are tied to the neck with a short chain, rope, or iron rod.
The remaining freedom of movement is just enough for the cows to lie down and get up again. For months they stand practically motionless in one place without the slightest change.

END_OF_DOCUMENT_TOKEN_TO_BE_REPLACED

Some of the visitors to the garden today. Tomorrow we (UK) have a warm front coming in from the Atlantic; so temperatures will rise by about 12 degrees; gradually clearing the snow.. Last cold night tonight guys; warmer day tomorrow; but at least you have all had a really good feed up today to help you get through the night just fine. See you all in the morning !

…………………….. and before the snows came; a real pleasure to feed and see all the garden visitors – it shows what you can attract by putting out some food …………….

We have tremendous news tonight (12/2/21) with regard to the leaked zoom calls from the Master of Fox Hunting Association and Countryside Alliance – after some months of deliberation, Mark Hankinson, director of the Masters of Fox Hounds Association, has been charged with intentionally encouraging or assisting others to commit an offence under the Hunting Act 2004, contrary to Section 44 of the Serious Crimes Act 2007.

We are delighted – here are our statements for you to share.

Director of MFHA charged over webinar | League Against Cruel Sports

The League Against Cruel Sports has welcomed the news that Mark Hankinson, director of the Masters of Foxhounds Association, has been charged with intentionally encouraging or assisting others to commit an offence under the Hunting Act 2004, contrary to Section 44 of the Serious Crimes Act 2007.

It follows the publication of leaked webinars by the Hunt Saboteurs Association and a subsequent investigation by Devon and Cornwall Police. He is due to appear before Plymouth Magistrates’ Court on 4 March.

However, the charity is seeking answers as to why more charges were not forthcoming.

Andy Knott, League Against Cruel Sports chief executive officer, said: “We welcome the news that a director of the Masters of Foxhounds Association is being prosecuted as a result of the leaked training webinars in which trail hunting was described as a smokescreen by senior members of the hunting lobby.

“Given the content of the webinars, we are astonished that more people were not charged. As the official complainant in this case we will be asking for a meeting with the Crown Prosecution Service to discuss this with them further. We always felt that Mark Hankinson had breached the law in these films and we are very pleased to see that a criminal charge has been brought against him.”

The League Against Cruel Sports is Britain’s leading charity that works to stop animals being persecuted, abused and killed for sport. The League was instrumental in helping bring about the landmark Hunting Act. We carry out investigations to expose law-breaking and cruelty to animals and campaign for stronger animal protection laws and penalties. We work to change attitudes and behaviour through education and manage sanctuaries to protect wildlife.

Find out more about our work at www.league.org.uk.