In our latest investigation, Animal Equality has brought to light distressing scenes from a “farm of horrors” located in Catalonia, Spain, where the highest concentration of intensive pig farms is located.

THE DETAILS: The investigation’s footage shows the farm’s non-compliance with Spanish regulations for the protection of pigs in the country, with evidence found of sanitation irregularities, animal abuse, and possible environmental crimes.

-Pigs living amongst excrement, as well as eating food and drinking water contaminated with feces.

-Overcrowded living conditions that lacked natural stimuli, causing the pigs to stress and compelled them to bite each other’s tails and ears. 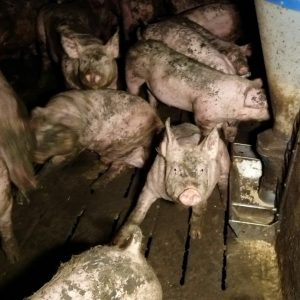 -Injured pigs, with some only able to crawl, while others who didn’t have the strength to move were left to die without veterinary attention. 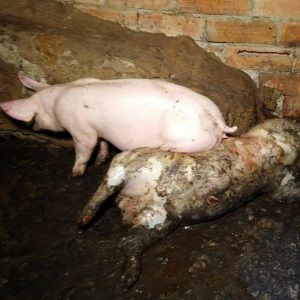 -Pigs living with the rotting carcass of one of their companions, risking potential disease transmission to the rest of the animals. 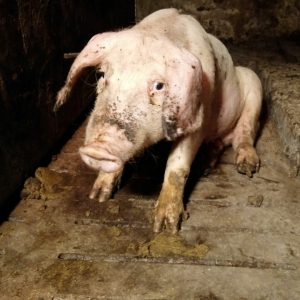 The illegal dumping of slurry, which is a possible environmental crime.

END_OF_DOCUMENT_TOKEN_TO_BE_REPLACED

We had a pretty cool sunset here tonight; and I only managed to grab the camera last thing; but few shots; must do better tomorrow !

A sellout crowd lined up outside Rudy’s Vegan Butcher for the plant-based meat’ shop’s grand opening on World Vegan Day! 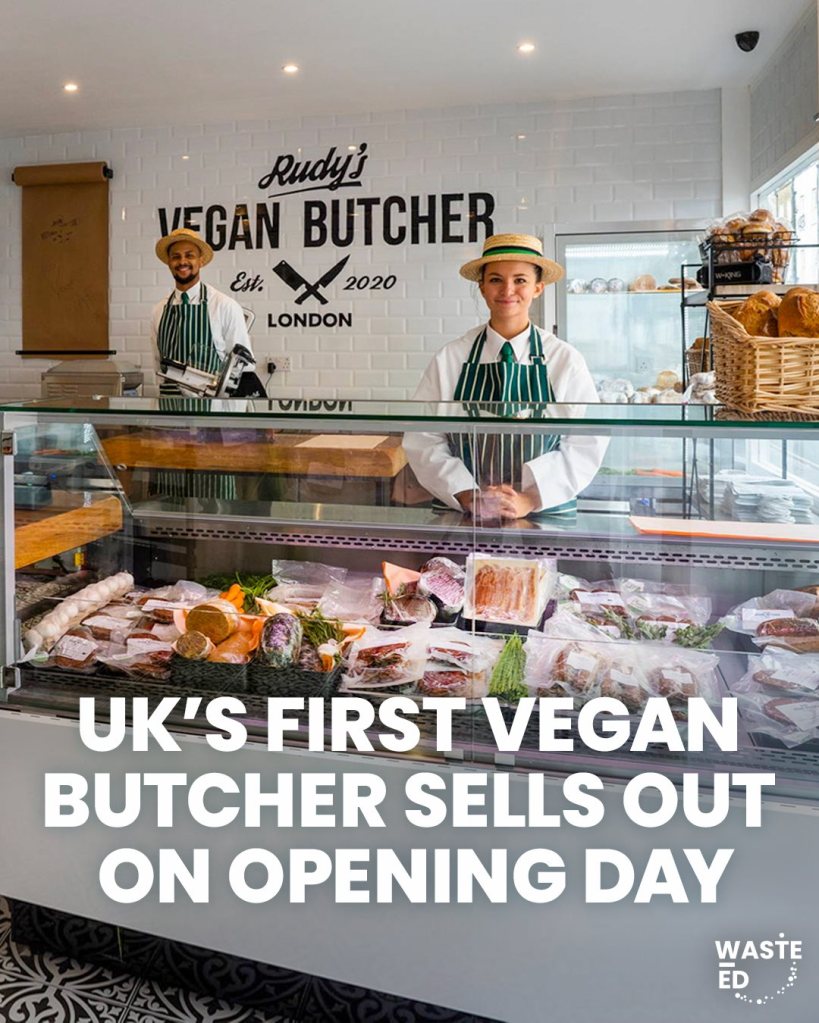 Hundreds of eager customers wrapped around the block, leaving them sold out a day after opening their doors! Rudy’s offers mouth-watering, plant-based barbecue staples and meatless charcuterie cuts of smoked ham, salami, pepperoni, and pastrami.

The London scene just got WAY more sustainable, and we’re so here for it!

And I mean…Wow! Who would have thought 30 years ago that they would still experience all of this … everyone thought… utopia!

The next step will follow, of that we are sure, and several branches of the vegan butcher shop will be opened across the UK.
Because demand determines the supply

After spending two decades working her way up the ladder as a psychiatric nurse, Kay Allen, 58, decided to pack it all in and do something radically different: open her own cat cafe. The former nurse from Holloway, North London, was inspired to make a change when she visited a cat cafe for the first time and was blown away by how relaxed she felt.

In 2018, she took the plunge and opened up ‘Whiskers and Cream’, a space where people can watch and play with nine gorgeous cats. Kay said: ‘I had often joked about the idea of running my own cafe and baking cakes but, having done something as full on as I had before with the level of pressure and stress, it felt almost not enough of a challenge, in the right way, for me.

‘Then I came across the idea of running a cat cafe and I traded in my old job, that was 24/7 and where I was never really off duty, with 24/7 responsibility for a cat cafe.’ Kay qualified as a psychiatric nurse in 1998 and spent two decades as a clinician, working her way through the health service to end up managing a large inpatient psychiatric unit in the capital.

Read more with extra text and lots of photos at:

‘It’s a calming and therapeutic space and even in lockdown I can be sat there in the cafe and people walking past can go from having a straight face to an almost overacted “oh my god” and a huge grin and smile. ‘That for me, from my background treating people’s mental health, gives me so much pleasure.’

Above – Crisis, what crisis ? Bernard Van Goethem (Mr ‘Crisis Management ??’) does nothing to sort out the problems here; and Mr Goethem; still no EU action on the ‘Queen Hind’ capsize at Midia, Romania.

WAV Comment – BIG thanks to ‘The Guardian’ (London) for sticking with, and reporting on this incident so very well over the last few months.  Click on our live export tag  Live Transport – World Animals Voice to read all the previous news from the Guardian (and more) about this most disgusting business in sentient beings.

And where is the EU ? – and Bernard Van Goethem ? – the crisis management head at DG Sante who is supposed to be involved with issues like this ? – it IS a crisis, is it not ?

One of two livestock ships at sea since mid-December with thousands of cattle on board is now at the Spanish port of Cartagena, but the fate of its cargo is unclear.

The two vessels left from different ports in Spain before Christmas to deliver their cargoes of animals, but were each refused entry by various countries including Turkey and Libya, owing to suspected outbreaks onboard both ships of the bovine disease bluetongue.

Spain’s government and the country’s largest association of beef producers, Asoprovac, have both said the cattle came from areas free of bluetongue.

On Tuesday, the Spanish news agency EFE reported that although Turkey had originally agreed to take the cattle, satisfied they were bluetongue free, the animals were rejected on arrival because of disease fears.

A Spanish government source confirmed that the Karim Allah, carrying a reported 895 calves, was anchored just outside the Spanish port of Cartagena. The other ship, Elbeik, carrying 1,776 animals, continues to sit at anchor in Turkish waters off the coast of Cyprus.

Silvia Barquero, the director of Animal Equality Spain, said she understood that many animals were already dead and any still alive would be “suffering a real hell”.

Official veterinary inspections of both ships had been due to take place late last week in Cyprus and Sardinia, but neither ship approached shore to allow vets on board.

On Tuesday, a spokesperson for Spain’s agriculture ministry described the ships’ plight as a “failed operation by a Spanish exporter, who was going to sell the animals in Turkey, then tried unsuccessfully to sell them in Libya”. The spokesperson did not respond to questions about animal numbers, conditions on the ships or possible next steps.

The spokesperson added that the Karim Allah, “now arriving in Cartagena, left Spain with animals that had the corresponding health certificates and which were from areas free of bluetongue. The animals therefore left the port of Cartagena in good health.”

Last week, the ministry said the Elbeik, which left from the Spanish port of Tarragona, was also carrying cattle from bluetongue-free areas.

Maria Boada Saña, a vet with NGO Animal Welfare Foundation, said she feared that at least 100 animals on the Karim Allah were already dead.

“The Karim Allah arrived Sunday night at Cartagena, sailing away from a planned veterinary inspection Saturday morning in Sardinia,” she said.

She added that a Spanish agriculture ministry source said that although the ship was in Spanish waters, it had not yet requested entry to Cartagena port.

“That means we have no idea right now if animals are alive or dead,” said Boada Saña. “Other sources, though, have told me the Karim Allah has not asked for animal feed. To me, the way it sailed away from an inspection, the way it is waiting and not asking for food probably means most of the animals are dead.”

Dead animals would have to be removed from the ship by hoist and the operation could take at least a day, or much longer, depending on numbers, said Genoa-based lawyer Manuela Giacomini.

In a related development, a Spanish government source confirmed that Cartagena port had temporarily suspended the departure of livestock ships until the Karim Allah docks. The vessel continues to be anchored in front of the harbour and the decision to enter the port was up to the owner of the ship, the source added.

Prof Kristen Stilt, director of Harvard’s animal law and policy programme, who is writing a book about the transport of live animals, said it was an inherent risk with live transport that the animals would be rejected at their destination port.

Once labelled as rejected, Stilt said it was “very likely that no other country [would] accept them, as we are now seeing with the two vessels at sea with calves from Spain”.

Another problem for crew and livestock, she said, was the absence of an international arbiter that could assess claims of disease and make a binding determination. The result, she said, was “usually catastrophic in terms of loss of animal lives”.

Dutch MEP Anja Hazekamp said “the only way to stop animal cruelty related to animal transport” was to introduce a total ban on the export of live animals outside the EU.

“Both vessels concerned have EU certificate approvals, which means that they can load European animals and send them to third countries, such as Libya, Lebanon, Egypt and Saudi Arabia,” she said. “In total there are around 80 vessels with such a certificate.”

Sign up for the Animals farmed monthly update to get a roundup of the best farming and food stories across the world and keep up with our investigations. And you can send us your stories and thoughts at animalsfarmed@theguardian.com.

Thanks to Robert for sending this link / information to us.

A cargo ship that has been at sea for almost two months that left Cartagena Port with hundreds of cows on board has returned to dock – with dead cows caused by Bluetongue disease.

The Karim Allah departed Cartagena on December 18 with 800 head on board heading for Turkey, where it was refused entry.

It is one of two animal cargo transporters that has been affected with the Bluetongue disease. The Elbeik that departed Tarragona was refused entry into Libya and is moored off the coast of Cyprus.

The Karim Allah is the only animal transporter ship that has left Cartagena to have had any issues, with millions of cattle having departed to destinations over the years.

“The animals were fit and healthy having left the Port in December,” said the President of the Cartagena Port Authority.

Many of the cows have died, with others in a state of poor health, due to the non-contagious Bluetongue disease.

The Animal Welfare Campaign has called for a ban following the incident.

The Ministry of Agriculture, Livestock and Fisheries have undertaken an inspection of the Karim Allah after docking at Cartagena Port.

Caption: The Karim Allah departed Cartagena on December 18 with 800 head on board heading for Turkey, where it was refused entry. Photo: Animal Welfare Campaign.

The odyssey of the 2,700 Spanish cattle that have been roaming the Mediterranean for two months.

The odyssey of the 2,700 Spanish cattle that have been roaming the Mediterranean for two months – Teller Report

Last Monday, February 22, the ship Karim Allah, loaded with 880 head of Spanish cattle, returned to Cartagena (Murcia), from where it had left on December 18.

The odyssey of the 2,700 Spanish cattle that have been roaming the Mediterranean for two months – Teller Report

, loaded with 880 head of Spanish cattle, returned to Cartagena (Murcia), from where it had left on December 18.

He was returning to the place of departure after spending more than two months roaming the Mediterranean after Turkey, the country to which the merchandise was destined, refused to accept it, considering insufficient documentation that proved that the cattle were free from the disease of the blue tongue

.The return to Spain seemed the definitive solution to a surrealist commercial conflict that, however, has not yet closed.

Since Monday, the ship has been anchored in the vicinity of the port of Cartagena, but does not ask for permission to enter before the warning of the Ministry of Agriculture