4000 turtles could be saved from freezing to death!

On an island in southern Texas, more than 4000 sea turtles have been rescued from the cooled water in the Gulf of Mexico in the past few days and temporarily housed in a conference center to warm up there. 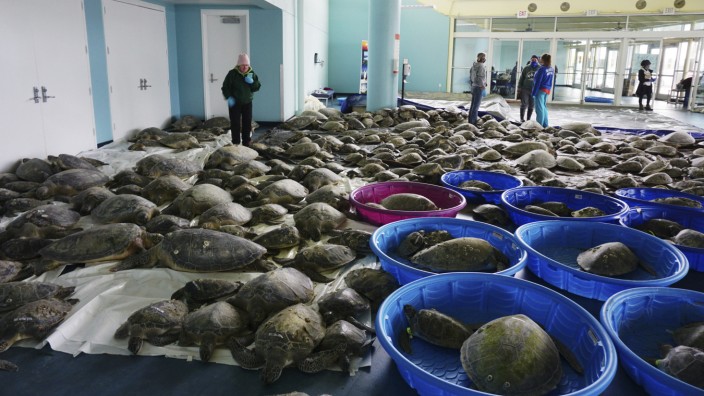 The severe onset of winter in the US state of Texas triggered a large-scale rescue operation for thousands of sea turtles.

The organization Sea Turtle Inc, which cares for the protection of sea turtles in the region, started the rescue operation.
The animals were spread out on plastic sheets in rooms and corridors of the congress center.

Sea Turtle’s Sanjuana Zavala told the German Press Agency on Thursday that the turtles were in a kind of rigidity in which they could not move, eat and drink until they were warmed up again.

This state lasted for several days. “We just have to wait and see now.”

There are real heavyweights among the turtles

The animals don’t necessarily have to be in the water in this state, emphasized Zavala.
In the beginning, they used the children’s paddling pool for some of the rescued turtles. But given a large number of animals, there weren’t enough such tanks.

As soon as the water temperature in the sea rises above 12 degrees Celsius again, the animals could be brought back there. The rescued turtles would have a weight of up to 180 kilograms.

A severe onset of winter is currently plaguing large parts of the United States and has led to massive power outages. The state of Texas in the south of the country is the hardest hit.

South Padre Island is near the US border with Mexico.
Zavala said that in the past few years her organization had occasionally had to rescue turtles from the sea in winter.
But it was never more than 200 at a time.
“We have never had it to this extent.”

Therefore one had to switch to the congress center. There, too, there were temporary problems with the electricity in view of the snowstorm.
But in the building, the turtles are protected from wind and weather and protected from the cold water in the sea.

Thanks to the helpers from Sea Turtle, Inc. and all of the volunteers 🐢