On February 23, ANDA and Animals’ Angels filed a complaint against Spain because the regulations for the protection of horses during transport are regularly not observed there.
The complaint initially relates to the transport route from Spain to Italy.

The NGOs have been monitoring the conditions of horse transport on this route since 2007.

In 14 years we have noticed the same violations again and again.
To this day, the responsible regional and national authorities in Spain are not doing anything to stop them sustainably.
The EU Animal Welfare Transport Regulation stipulates that horses that are not used to a halter may not be transported for more than eight hours.
Still, the vast majority of horses transported from Spain to Italian slaughterhouses have never worn a halter in their short life.

In addition, the regulation stipulates that horses must be transported in individual boxes on long journeys. This rule is not observed when transporting horses between Spain and Italy, as they are almost always transported in groups.

The complaint also includes non-compliance with EU rules for shorter journeys within Spain, where too many horses are often loaded and the ceiling height of the vehicles is too low.

The disregard of the legal regulations leads to stress and suffering for the transported horses.
Their safety and physical integrity are not guaranteed.
This is far from the dignified and fair treatment horses deserve on their last journey.

According to Alberto Díez, ANDA …” the animal welfare laws are the guarantors for the dignified treatment of animals.

If they are not observed, this guarantee is void and the animals have to bear the consequences.
We hope that the lawsuit against Spain at the European Commission will serve as an incentive to finally enforce the law and respect animal welfare. “

Now the EU Commission is called upon to act (!!)
More about our work at Animal transport in the EU: https://www.animals-angels.de/…/europaeische-union.html

And I mean…When it became known in 2013 that ready-made meals were incorrectly declared in various EU countries and contained horse meat instead of beef, the outrage was great
Eating horse meat is taboo for many meat-eaters.

In Germany too, but in the first half of 2017, 940 tons of horse meat were “produced” in this country.
There is a large market for this in the EU, particularly in Italy.

The largest exporters are Romania, Lithuania, and Poland.
In Poland alone, resourceful traders buy 60,000 horses for slaughter every year.

They are loaded with large transport vehicles across the country and transported to Spain, France, and, above all, Italy.
Some of the animals are already being slaughtered in Padua in northern Italy.
But numerous transporters continue to drive and spend the horses on a day-long journey over 2000 kilometers to the south.

From a purely legal point of view, this is still legal, because the applicable EU Regulation 1/2005 “for the protection” (!!) of animals during transport only provides for rest periods for the animals, but no limitation of the pure transport times.

The European Food Safety Authority found during controls in 2011 that every third horse suffers injuries during transport.
40 percent of the animals were in such bad shape at their destination that they should not have been transported.

Horses are sold in huge numbers every year and then transported across Europe to Italy, France, and other countries.
In part, this happens with subsidies from the EU, where they usually end up on the slaughterhouse. 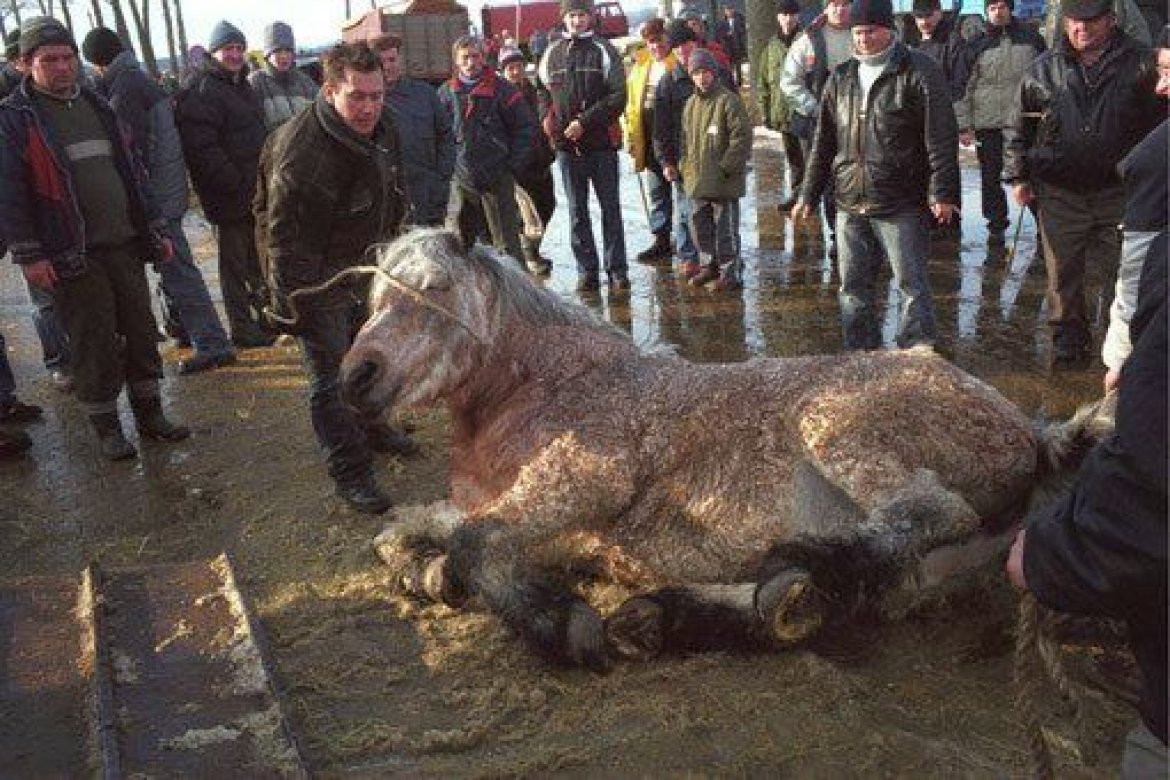 Reports indicate that horses are repeatedly treated brutally and that no veterinarians can be found in the whole market.

Polish animal rights activists refer to Skaryszew as the “horse hell of Poland”.

Most of the horses that are sold on this market go to fatteners and slaughterers and some of them are transported to Italy, mostly under animal welfare conditions. But many horses end up in the hands of Romanian intermediaries who unscrupulously sell them for slaughter …

The law situation within Europe for animal transport does not protect animals from such cruelty.

And on the part of the EU- Commission, there is no interest in limiting animal transports.
The responsible EU politicians are primarily concerned with economic interests and they don’t give a shit about animal suffering.

But one of the worst things is that there is a high “corruption” among “politicians and officials” in”horse”- countries, and for “looking away at the innumerable cruelty to animals” the latter collect countless “bribes” from the “horse dealer mafia”.