NGO investigations and EU audits carried out since 2010 have shown non-compliance with relevant EU requirements relating to animal welfare and traceability of horses in Argentina, Australia, Canada and Uruguay. Horses are systematically neglected and mistreated along the production chain of horsemeat.

They are beaten, kicked and receive electric shocks. They are malnourished and exposed to extreme weather conditions in slaughterhouse pens and at assembly centres. Injured, sick and weak horses receive no veterinary care and are left to die unassisted.

The assembly centres and transport are not covered by EU rules. Horses are transported over long distances without water, crammed together in unsuitable cattle trailers, and many do not survive the journey to the slaughterhouse.

For several years, NGOs have been providing evidence that the audits of the EU Commission and European importers are manipulated by horse dealers and slaughterhouse operators. 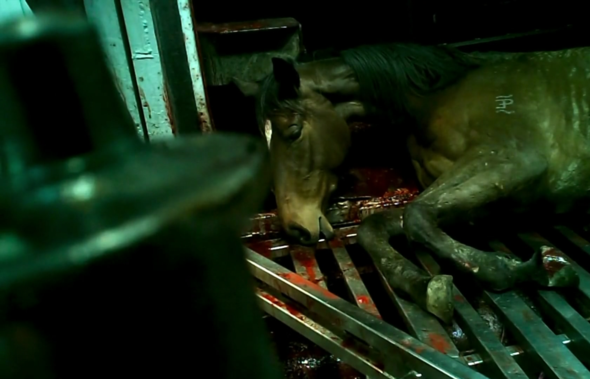 For example, pregnant, injured, sick and emaciated horses are replaced or removed.

The reports of the latest EU audits in Uruguay and Argentina state that the assembly centres were either empty or the horses had been exchanged shortly before the visit.

In the above-mentioned countries, horses are not considered to be food-producing animals and are commonly given drugs that are prohibited in the EU for use in horses destined for human consumption.

The traceability systems in place are unreliable, as they rely on the honesty of horse owners and dealers, who give sworn declarations on the medical treatments in the six months prior to slaughter. 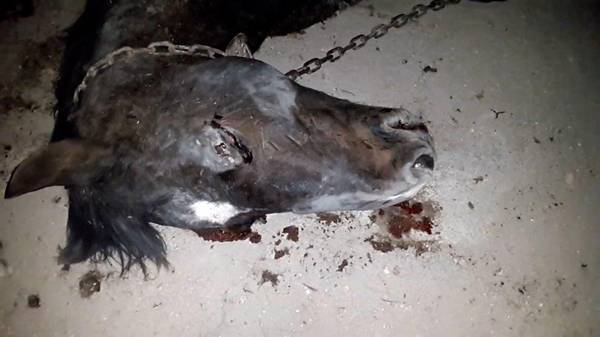 Argentina, a slaughterhouse in Land L: Injured horses are pulled from the transporters with chains and left to die.

In the EU, horses are microchipped and have a passport showing their medical history.

In the export countries, they are tagged shortly before being sent to slaughter. Due to the lack of traceability, horses of unknown origin and with unclear drug history as well as stolen horses enter the food chain, which poses a high food safety risk for European consumers. 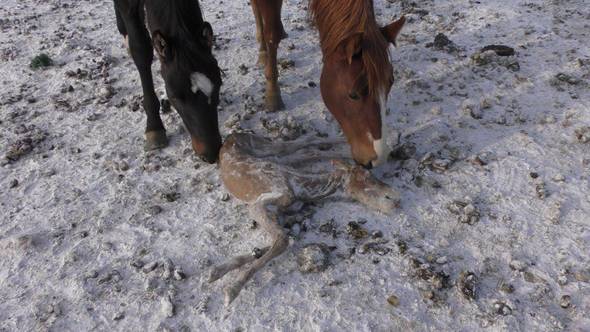 Canada: A foal that is frozen at birth is left in the pen for days.

A suspension of horsemeat imports from Mexico and Brazil has already been imposed, as a result of EU audits in these countries.

Please help us to urge the European Commission to immediately suspend horsemeat imports from third countries that do not comply with applicable EU requirements, such as Argentina, Australia, Canada and Uruguay.

And I mean…In Australia, they are called “wastage”, literally translated as “waste”. This refers to racehorses that are no longer profitable when they become unusable if they are disposed of as cheap goods in the slaughterhouse.
They have done their “service” on gallop tracks, trotting tracks or in breeding farms.

Their meat ends up mainly on European plates.
In Belgium and Switzerland, there are companies and associations that have for decades benefited massively from the import of horse meat from cheap, tortured production.

The Belgian company Multimeat is the owner of the Meramist slaughterhouse, and in Switzerland, it is the Association of Swiss Horse Meat Importers (VPI).

From the report of the “Tierschutz Bund Zürich” and Animal Welfare Foundation:

“Covertly filmed recordings of the slaughtering process in the slaughterhouse in Meramist show how horses are tormented for minutes through incorrect stunning and repeated shooting (up to five times).

Like horses that have failed to stun with a nail gun, rearing up, falling on their backs and trying to get back on their feet. How badly anaesthetized horses are hung up to bleed, defend themselves, pant for breath in panic, open their eyes in pain, clamp themselves with legs, which then break. How their nostrils are cut off when they are conscious.

Nobody can explain to us why this additional torture is. We see workers kicking the horses lying on the ground in the face or pressing their heads down with their feet in order to start the bolt shot again”.

For years we have been demanding that the import of horse meat from torture production be banned.
But how much hope is there if the EU is involved in the business itself?

The problem is the system, and the meat production system has fascist policies that are responsible for the animal holocaust