Nigeria:  Undercover investigation by UK television shows that wet markets operate as normal; and that this is another Covid pandemic waiting to happen. Disturbing footage, as are all wet markets that involve live animals.

ITV News secretly filmed there – a place awash with animals – alive and dead. Scientists believe wet markets are a breeding ground for disease, a high risk environment, from where the next pandemic could emerge.

The very concept of a “wet market” means the presence of blood and bodily fluids.

It is a marketplace selling fresh meat and fish, as opposed to a “dry market” that sells durable products.

Not all wet markets sell live animals. Not all of them trade in wild and exotic animals, but some do, and some of those have been linked to outbreaks of zoonotic diseases, where an infection crosses the species barrier from animal to human. Exhibit A. Covid-19. The pandemic that allegedly originated at the Huanan Seafood Wholesale Market in Wuhan, China.

Video obtained by both ITV News and the charity WildAtLife shows live crocodiles having their scales removed, pangolins being kicked and abused and dogs boiled alive.

Multiple primates were seen imprisoned in cages, the heads of others were for sale. It was difficult to watch when a baby baboon, trapped inside a birdcage, reached out to the camera grasping for freedom, as a decapitated monkey was sold next to him.

One woman reached into a brown sack and pulled out a pangolin. This species is the most trafficked animal in the world. We could buy it there for less than ten pounds.

The pangolin is a species that has been linked to the COVID-19 outbreak in China. Their scales are of high value in Asia for medicines.

The abuse of animals and the health risks for humans at this market were plain to see. It’s what the conservation group WildAtLife want to expose. Chinedu Mogbu works for them, and has rescued umpteen exotic species from there in recent months.

He said: “Nigeria doesn’t have strong laws to protect its wildlife.

“Anyone can go into the forest, take a pangolin and sell it on the street. The law enforcers are not even aware of the importance or the laws that protect these animals.”

We did notice the presence of Asian buyers at this African market.

Any illicit, international trade would undoubtedly increase the risk of spreading disease around the globe, but Nigerian officials say they are doing enough to prevent that.

Joseph Attah from the Customs Service refused to answer more than one question on the matter though.

This was all he would say: “We have been making a lot of seizures about that, we have been seizing them and we will continue to seize them anytime we see them.”

We know, that despite our allegations, the wet market in Epe continues to thrive. Scientists are concerned that such places pose an unnecessary and high risk.

“Every single animal at a wet market is likely to have an infection,” Malcolm Bennett from the University of Nottingham told me. He is Professor of Zoonotic and Emerging Diseases.

He said unflinchingly, “It is going to happen again.”

There is a high security lab at the university where they are analysing the affects of COVID-19 on cells.

Bringing together animals and people that don’t usually mix increases the risk of new infections, so wet markets are ideal places for cross species transmission and disease amplification.

Other viruses we know of that started out as zoonotic diseases are SARS, MERS, Ebola, even HIV.

Stopping the development of such viruses is impossible, instead we need to mitigate the risks.

In many peoples’ eyes what happens at some wet markets is unhygienic, tortuous and brutal, but in African and Asian nations it isn’t simply a case of shutting them down. There are more issues at play. They have a critical role in social interaction and for different cultures. The Deputy Director of the National Zoo, Aminu Muhammad Beli, explained.

“We cannot close the wet markets because there are certain animals that have cultural attributes to certain tribal groups. We have to devise a way of sustaining the industry,” he said.

His words are perhaps difficult to stomach when you see carcasses lying in the hot sun and live animals being butchered. Regulation and surveillance must increase though, else harmful pathogens will breed.

We just can’t predict where or how destructive they will be.

Comment – I watched the investigation on UK news yesterday (16/3) – and was informed that some of the UK team rescued some of the animals and released them back into the wild where they belong. Well done ITN.

He is getting a preview of what is next for him …

At Easter, not only chocolate bunnies are served, but also lots of eggs, a roast rabbit, or even an Easter lamb. What many are not aware of: Thousands of lambs suffer before the holidays, especially for our enjoyment.

In large parts of Europe, sheep are rarely kept for their wool, because no profit can be made from it, not even from sheep’s milk production.
Lamb, on the other hand, is still considered a delicacy in many places – especially at Easter. The lamb babies are between eight weeks and six months old when they are slaughtered.

As a rule, they have never eaten grass.
Their meat is therefore considered to be particularly tender and low in fat.

In Italy, the demand for the Easter lamb is particularly high. According to the Confederazione Italiana Agricoltori (CIA), the Italian farmers’ association, Italians eat around 260 tons of lamb on the festive days alone, for which several million lambs lose their lives.

The great demand is mainly due to the Christian tradition, in which the Easter lamb is a symbol for Jesus Christ and his resurrection.

For the History: Jesus voluntarily sacrificed himself for the sins of mankind.
For the truth: Nobody asks the lamb, we just kill it.

The right to life should be taken for granted. For all living beings
Therefore: Let animals out of your plate! A tortured animal is an involuntary sacrifice and its suffering cannot justify any tradition or religious belief

Nebraska Governor Pete Ricketts is declaring a pro-meat day in response to Colorado urging its citizens to eat plant-based.

The initiative was founded by Farm Animal Rights Movement (FARM) back in 1985. It aims to ‘educate consumers about the benefits of a healthful, plant-based diet’.

“Removing animal products from our diets reduces the risk of various ailments, including heart disease, cancers, and diabetes,” FARM states.

“A plant-based diet helps protect the environment by reducing our carbon footprint, preserving forests, grasslands, and wildlife habitats. It also reduces the pollution of waterways.

“Since MeatOut was launched, more than 35 million Americans have explored a plant-based diet and reduced their consumption of meat, dairy, and eggs. And, major food manufactures and national franchises are marketing more vegan options in response to this growing demand.”

Whilst many commended the move, Ricketts blasted the incentive, claiming it is a ‘direct attack’’ on Nebraska’s ‘way of life’.

According to The Guardian, he said: “If you were to get rid of beef in our country, you would be undermining our food security, an important part of a healthy diet. And, also destroying an industry here in our state that’s very important.”

“Agriculture is the heart and soul of Nebraska, and our 45,700 farm and ranch families keep our state going year after year.”

Nebraska is now urging citizens and restaurants to participate in ‘Meat on the Menu Day’ on the same day as ‘MeatOut Day’.

They are filigree relics from # prehistoric times … The graceful little crabs – known as so-called “Triops” – are considered “living #fossils”.

With their original body and shell structure, their three complex eyes (TRI = three OPS = eye), and their artful movement patterns, the small prehistoric animals exert a great fascination on us.

Many children and young people want to bring a piece of primeval times into their own children’s room by buying a “Triops set”.

Triops eggs can be purchased online and in zoo and toy shops for less than 20 € in the “complete carefree package” with food, mini aquarium, and various auxiliary utensils …

Once the “handicraft set” has been opened and the eggs put in the water, the cute little animals hatch after just a few days and swim around in their cramped, monotonous plastic baskets in the hope of being reliably fed.
The crabs suffer silently.

It is not uncommon for the enclosed instructions to be ignored and the locations for the small water basins to be chosen so inappropriately that the little animals perish in agony, for example in the blazing sun or standing on a heater.

The fascination for the small creatures quickly gave way to another exciting occupation, and they are no longer adequately cared for or simply dumped into the toilet out of weariness.

The “animal experiment sets for the children’s room” are generally approved for children from 8-9 years of age. Such a pronounced sense of responsibility for living beings is not yet sufficiently given at this young age in very many cases.

Entrusting them with such responsible tasks always requires close control by parents, which unfortunately only rarely comes into play.
Apart from the maturity of those providing care, it is absurd to use sentient beings – no matter how small they may be – and no matter how short their life expectancy may be – for experimental ones

‼ ️ We demand a ban on the sale of “craft kits” with living beings and thus an end to silent tadpole cancer suffering in the nursery! Interested parties of all ages can gain valuable knowledge about animals and nature, for example from non-fiction books and TV or online documentaries.

Under no circumstances is it necessary to expand this in the form of domestic animal experiments!
Follow us & stay up to date.

Text: Animals United e.V. – For animal rights. Because pity is not enough!

And I mean…This disgusting business is booming on the internet.
Instructions for beginners and advanced slave owners on how to breed the animals, what you need for successful Triops breeding.
Eggs, food, and a complete set of equipment for rearing and observation are offered in inexpensive presences. 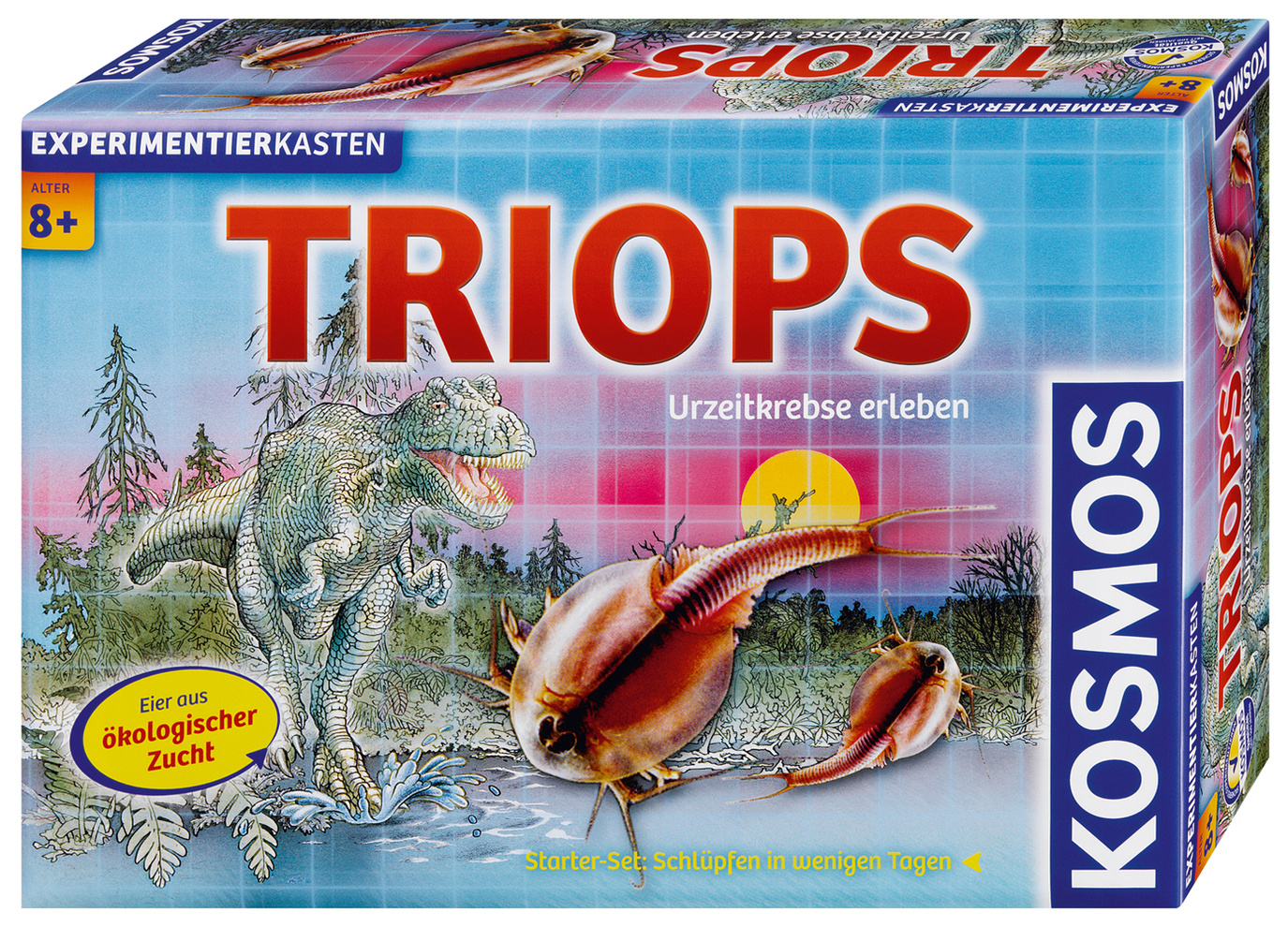 Teach your children what empathy and correct behavior are towards animals.