The “Yes, to Abolish Hunting” committee announced that the necessary 500,000 signatures have been collected. Hobby hunting with all its misery is to be banned for good in Italy.

President Tony Curcio: “If all goes well, we will vote next spring”.

On Saturday, October 23, 2021, the 500,000 signatures required to start the process of validating the referendum question were reached.
This milestone was set on July 1, 2021 when environmental and animal rights activist organizations decided to set out to bring the issue back into the focus of public debate.

The ball now lies with the Court of Cassation, which has to check the validity of the applications and then appeals to the Constitutional Court to check whether they are constitutional.

“We are happy to have achieved a goal of this magnitude, it was difficult, but we made it”.
This is how Tony Curcio commented on the news to fattoquotidiano.it.

“At first we thought it would be easier to get to this point, but without proper media coverage we just had to work through word of mouth and things got complicated,” said the activist.
Hence his “thanks to the more than 1,500 volunteers who have contributed to this important result”.

As far as the next steps are concerned, Curcio’s path is clear: “Next Saturday we will submit the collected signatures to the Supreme Court, which will check the validity of the signatures.
Then it is the turn of the Consulta to comment on the text “.

In the event of a positive result, it is hoped that the vote can take place next spring.
We hope that it will be held at the same time as the other referendums under discussion, because a possible election day could indirectly bring us more support. 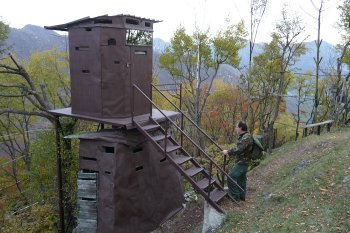 As the President of the Comitato Sì Aboliamo La Caccia emphasized, the referendum is not only about the ethical question of respect for the life of animals, but also about the other damage caused by hunting:
“Every year, many people are accidentally injured or killed by hunters, and pets are more likely to be affected.”

“And not only that”, says Curcio: “We also have to think about the pollution caused by lead from cartridges, which is deposited on the ground and in some cases gets into the groundwater and contaminates it.”

This initiative is not the first in this direction.
Another attempt to abolish hunting was made in 1990 when the Radical Party, the Greens, the Communist Party, the Democrazia Proletaria and various ecological associations proposed two referendums aimed at restrict regulations on hunting and hobby hunters’ access to private property.
However, both failed due to a lack of support.

And I mean…An initiative of reason and morality.
Hunting means the worst crimes against defenseless animals and therefore goes against ethics, solidarity and common sense

In the 2018/19 hunting season there were 80 human victims in Italy.
The highest number of hunting accidents occurred in the Campania region in southwest Italy with 15 victims.
And although there are fewer and fewer hunters in Italy, they are still privileged by politics, especially the PD (partito democratico italiano) and the Lega.

It’s an old story. The hunters have an influence, but also the arms industry with its lobbyists in parliament and in the regions.
Hunter and arms industry = A deadly mixture that damages nature, massacres animals and kills people.

We are hopeful that the sensitivity towards animals is much greater today than it was in the past.
Just look at the increase in vegetarians and vegans.
So now is the time ripe for the abolition of hunting.