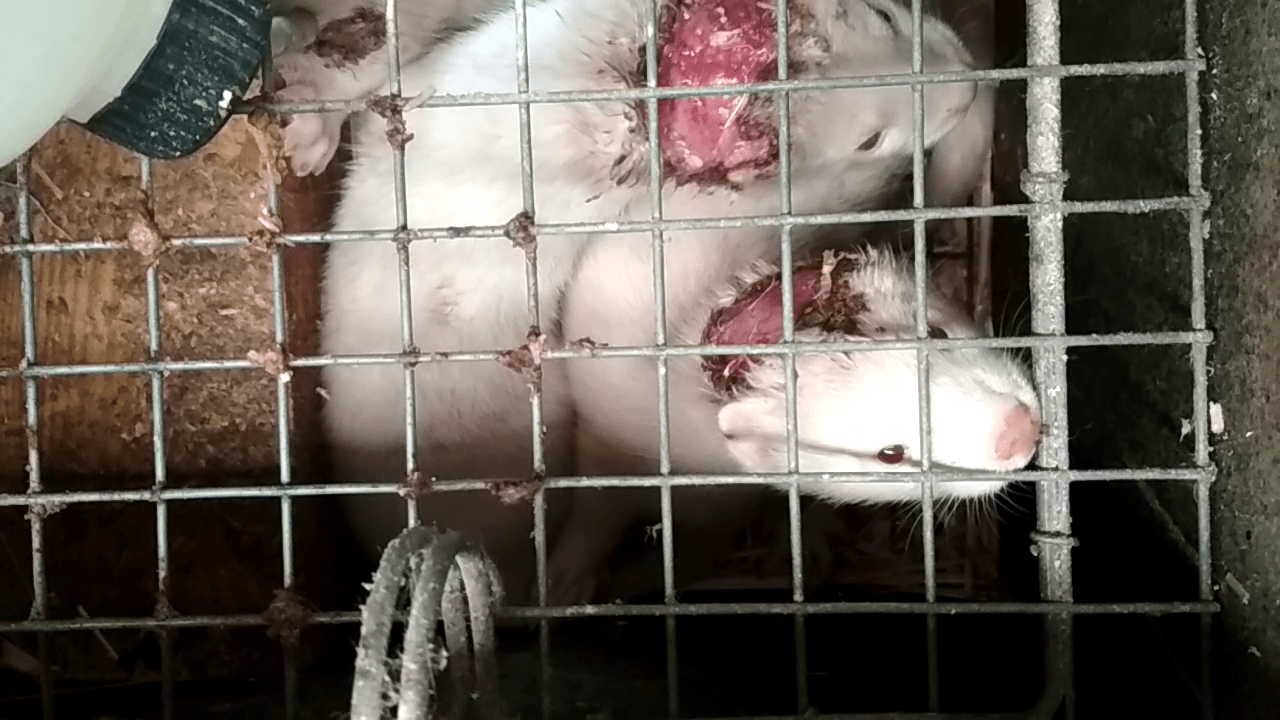 From ‘Respect for Animals’; Nottingham England.  Fighting the fur trade.

Over two dramatic days, the Sejm (the lower house of the Polish Parliament) has held a historic meetings advancing the legal protection of animals in Poland. It concerned the so-called “Five for animals”: a proposed bill with key changes to animal protection law. MPs voted in favour of an amendment, which includes a ban on breeding animals for fur.

The sitting of Sejm on Thursday, 17 September 2020 was saw an impressive majority backing the legislation. Politicians from across the political spectrum supported the initiative and resulting in a majority of MPs (77%) voting in favour. Now the bill has to be voted on by the Senate (the upper house of Polish parliament) and signed by the president.

The sponsor of the Bill was the Law and Justice Party MP Grzegorz Puda, Deputy Minister of Funds and Regional Policy. He defended the project against attacks by fur industry apologists. In addition to the key issue of ethics of animal cruelty, he argued that the project had involved consultations with villagers who suffer from the stench, insect infestations, environmental and groundwater pollution as a result of fur production.

This victory over the cruel and unnecessary fur trade is a major moment in the anti-fur campaign: Poland is the third biggest fur producer in the world. Every year over 5 million animals are killed for fur in Poland. This cruelty is now close to finally coming to an end.

Respect for Animals is proud to campaign with our Fur Free Alliance colleagues Otwarte Klatki and Viva! Poland and commends their fantastic campaigning in Poland.

After many years of frustration, this legislation has progressed remarkably swiftly. Last week, we brought you news of a shocking new undercover investigation from Poland on one of the world’s biggest fur farms, which depicted horrible suffering of mink.

The footage revealed numerous cases of cannibalism, aggression, self-harming, open wounds and paralysis amongst mink on the farm. Also, it showed the lack of veterinary care on the farm and many cases of animals escaping.

“This is a shocking investigation. The suffering of these animals can scarcely be imagined.

“I personally know what impact seeing these atrocities first hand and close up can have. As the undercover activist said in the video, some of the things he has seen will live with him forever. I still live with some of what I saw in UK fur farms more than 20 years ago and it is not easy, but is certainly one of the things that has driven me on to work to end this disgusting industry.”

Just two hours after the publication of this footage a press conference was organised by the ruling party, in which they announced the “Five for Animals” bill.

Respect for Animals has been running an open letter to the Polish Embassy calling for a fur farming ban.

You still have time to add your name, here:

WAV Comment:  As if we did not know ! – we have been shouting about this, and providing evidence for years !

Check out all our pig issues at  https://worldanimalsvoice.com/?s=pig

The European Parliamentary Research Services recently published a comprehensive briefing on the EU pig meat sector that is meant to inform MEPs and their assistants. Animal welfare and environmental degradation feature prominently among the issues to be urgently addressed.

Pig meat production accounts for half of the total meat production of the European Union, which is also the main global exporter of pig meat products. Exports and pig meat prices increased substantially in 2019-20 due to the epidemic of African Swine Fever in Asia, which has decimated the local pig population.

But it’s not all about the economy, and it’s definitely not all roses. In a new report, the European Parliamentary Research Service importantly stresses that “the vast majority of pigs in the EU are bred, kept and slaughtered for meat within an intensive system that gives rise to numerous issues linked in particular to animal welfare and pollution.” And we are talking about 150 million animals.

The report goes into detail on the generalised lack of compliance with the Pigs Directive explaining that “Despite EU regulations prohibiting routine mutilation, most piglets in the main pig producing Member States are routinely subjected to harmful practices.”  We were pleased to see that the important activities of the Intergroup for the Welfare and Conservation of Animals and our campaign End Pig Pain, which collected more than 1 million signatures asking for better lives for pigs, are mentioned in the report.

Another major issue is the environmental impact of pig farming, which is responsible, according to the research services of the European Parliament, for significant water and air pollution, as well as “odour and noise, the spreading of heavy metals, pesticides, toxic substances and pathogens (including antibiotic resistant pathogens), water pollution by residues of pharmaceuticals, excessive use of groundwater”.

Have a good night, Venus

In 2012, PETA was able to show that some previously animal-free companies had started to market their products in China and to have the animal tests required by the Chinese authorities carried out approvingly.

For such experiments, hundreds of thousands of animals are tortured every year in cruel, fatal poisoning tests in which substances are forcibly administered to them, chemicals are applied to their skin, or chemicals are dripped into their eyes.

The latest developments in China in animal testing for cosmetic products give hope for great animal-friendly improvements.

The Chinese government is now taking new steps and easing its requirements for cosmetic tests on animals.

In detail, it looks as if China will soon no longer require animal testing for imported cosmetics in the “Non-Special Use” category (e.g. shampoo, shower gel, body lotion, make-up) so that these products can be marketed in China.

In January of this year, a long-awaited new draft of the so-called Cosmetic Supervision and Regulation (CSAR), China’s outdated cosmetics regulation, was drawn up.

The final publication for implementation was delayed due to COVID-19, but the final draft has now been published and is currently being analyzed.
If it is passed, it would be possible in the future to market many imported cosmetic products in China that have not been tested on animals.
That would be a huge step forward and save countless animals from cruel experiments!

Unfortunately, however, it does not mean that animal testing is no longer carried out in China at all.

Companies that manufacture products in the “Special-Use” category must continue to have animal tests carried out for marketing in China, which means that animal tests are still required for these products – regardless of where the products were made.

And I mean… Companies that want to export cosmetics to China have to accept animal testing.
Without registration with the CFDA (China Food and Drug Administration), customs clearance is not possible – and therefore no market entry.

This regulation is now to be relaxed.
In addition, the Chinese government has approved two new cruelty-free testing methods
We are really happy.

Of course, there is still no ban on testing cosmetic products on animals, but at least and with the new regulation, companies can now officially decide freely whether to use methods that do not involve animal suffering

The animal rights organization Cruelty-Free International (CFI) sees this as a very important step.
It remains to be seen whether China will abandon animal testing for cosmetics altogether.

That would eventually increase China’s sales, because the many cosmetics companies that don’t want to sell their products there, for this reason, would do it again.

We can’t quite believe it yet!!
Poland’s parliament has voted for a new animal welfare law that also provides for the end of the fur industry.

Rabbits are an exception. For them, the agony continues.
The owners of the fur farms have one year to close their farms.

If Poland, as the third-largest fur producer in the world, actually excludes from this torture, then it will be a gigantic success.
If Poland falls after number 4, the Netherlands, then we will also be able to free Europe from the chains of the fur industry.

This is thanks to the many great animal rights activists in Poland.

We post some photos of the action, protests with local residents against mink farming.
Much of it has come together in 10 years …

Thank you Otwarte Klatki
Thank you BASTA Inicjatywa na Rzecz Zwierząt
Thank you, Viva, and all the others.

Poland makes a huge step in the right direction

During an historic meeting for the legal protection of animals, the lower house of the Polish Parliament discussed the “Five for animals” bill which proposes key changes to the animal protection law. 77% of MPs voted in favour of an amendment which includes a ban on breeding animals for fur.

The Five for Animals bill proposed measures that include, among other things:

Otwarte Klatki started the fur ban campaign (called “Cena Futra” – price of fur) 9 years ago. Since then, they have exposed the reality of the Polish fur industry with crucial investigations.

Their last investigation exposed the suffering of minks in what is probably the biggest mink farm in the world, bringing fur farming back on the political agenda.

Just two hours after the footage went public the Polish ruling party announced the “Five for Animals” bill during a press conference. The initiative received crossparty support resulting in a majority of MPs (77%) voting in favour. Now the bill has to be voted by the Senate (the upper house of the Polish Parliament) and signed by the president.

Earlier this year, our undercover investigators visited a game bird farm in Suffolk, and found row upon row of pheasants and partridges, confined to cages, desperately trying to escape. The sight of dead birds littered the ground nearby.

We filmed partridges, imprisoned in barren metal boxes, without any enrichment. The stress and anxiety that these birds must experience is unimaginable – and their trauma is visible by the way that they repeatedly fly up into their cage roofs, in a futile attempt to free themselves.

We have all experienced the heat of this summer, but it is horrific to think of being in a barren metal box in soaring temperatures, with no means of escape.

Our cameras also captured scenes of cramped cages, containing several female pheasants and one male. The females had ‘shrouds’ over their beaks – used by game bird farmers to stop the birds from attacking each other – but if anything these cruel contraptions make the birds more anxious. Many of the pheasants had painful looking bare skin from the loss of their feathers.

We are campaigning at political and public levels to ban these cages as part of our overall campaign to see an end to the killing of animals for so-called sport.

The pheasant shooting season is about to commence on 1 October – so please lend your support to our campaign by doing these two quick actions: