The second undercover research reveals how pigs are again tortured for Tönnies!

We recently published scandalous video material from a Tönnies supplier in North Rhine-Westphalia and reported the conditions there.
The public prosecutor’s office then took up the investigation and Tönnies, the group that slaughters around 20 million pigs annually and thus makes over six billion euros in sales, was forced to react.

Now we have again proof of the terrible way pigs suffer and die for the Tönnies Group.

We now have terrifying images from the largest pig fattening in Lower Saxony. The video recordings show how densely packed animals have to stand in their own droppings.

Many of the animals show some very serious injuries that did not occur overnight.
Untreated, bloody injuries, huge tumors, and abscesses can be seen. Most of the animals can only hobble.

Dead pigs can also be seen among the live ones. A statutory sickbay cannot be seen on the recordings.

Obviously, the farm operator is not fulfilling his duty of care and simply making the pigs suffer.

Particularly frightening: During the two documented nights, the drinking water was consciously turned off by the operator.

A method popular with pig fatteners, but prohibited by law, so that the animals can consume a high-calorie mash more quickly the next morning.

In some places, the legal requirements of max. 2 cm column width not adhered to. The width of the column was in part around 10 cm.

This is a high risk of injury to the animals. Apparently, there are no controls in the company or the inspectors just look the other way. 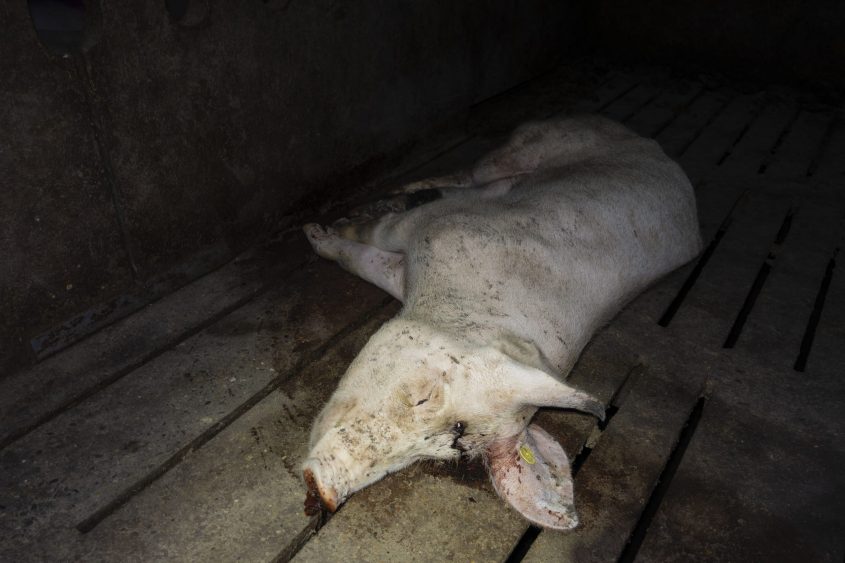 The pig fattening is even a QS-certified company.

QS (Quality and Safety) is a certification mark for food and can be found on many meat products in the supermarket.
From the QS contract found in the company, however, it emerges that QS primarily relies on “self-monitoring”.

From other documents found in the fattening farm, it can also be seen that many of the animals suffered from diarrhea and pneumonia.
We have already reported criminal charges against those responsible for the company and informed the veterinary office.

And I mean…The meat industry is well subsidized and abundantly.

It starts with the financing of the infrastructure, goes through the subsidies for new industrial buildings/power plants, and ends with the subsidization of ongoing operations (write-offs to reduce taxes, for example for expensive vehicles).

The system is perverse from start to finish. Nothing is right here anymore.

Why doesn’t the state force criminal breeders to pay for their environmental destruction themselves? so why do we have to do it?
Because corruption is the basis of representative democracy in Germany.

According to the German Animal Welfare Act, anyone who tortures an animal or kills it for no good reason can be punished with up to three years in prison.
But this penalty is practically never imposed for animal welfare violations in factory farming.
Often times there is not even a charge.

That is also part of the corruption story.