This could be the title of this photo of the two wedding doves because it is very likely that it will actually be their last!

Why? you ask yourself, the little animals were released for the wedding spectacle in freedom!!
We will explain it to you briefly:

Wedding doves, white doves or doves of peace, whatever you may call them, are raised by breeders just for that one day when they are supposed to offer an unforgettable spectacle to a wedding party and a wedding couple, as a symbol of eternal loyalty of the bride and groom!

But nobody sees the suffering behind it!

First comes the rearing!
This is done by default in absolute captivity, to small cages and isolation from the outside world!
Until the big day when they are supposed to serve as symbols for unsuspecting lovers!
The merciless breeder, who normally already knows about the fate of his pigeons, is of course silent out of greed for profit! 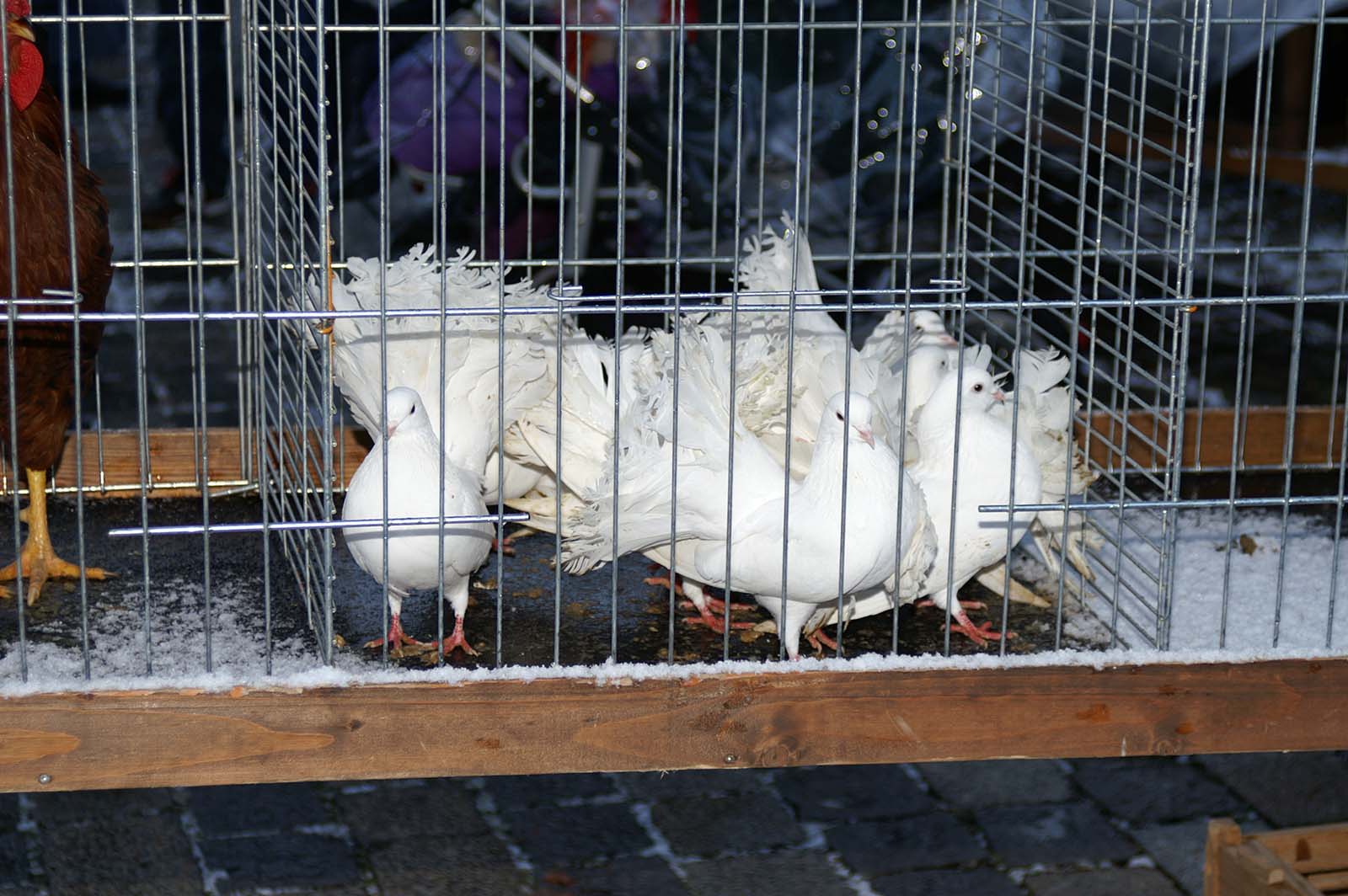 The animals are sold to the wedding couple for the wedding ceremony as a token of their eternal loyalty and then released into the air (and apparently) in their freedom!

And this is exactly where the real martyrdom begins!

They fly away and due to the lack of orientation, because they were previously only kept in cages, they will lose themselves and from this moment their death throes begin.
They know neither other people than their propagator, nor the environment and other animals!
The impressions that are now offered to them will deeply disturb them, but they will remain trusting!
This can be fatal for them in two ways!

Firstly, they approach all people without hesitation and, as we all know, pigeons are unfortunately still outlawed in society! In the worst case, this can lead to them being injured or even killed by human hands!
And secondly, they do not recognize the danger when a predator approaches them or the dangers of public transport and thus become easy prey or run over!
They also do not know the glass facades of the urban jungle and often die after an impact against them!

Furthermore, city pigeons know where to look for food!
Our wedding doves definitely not!
They do not know the feeding places that compassionate citizens provide for them!
They don’t know that pigeons can find essential food in garbage!
And that is exactly why many of them will starve to death!

Likewise, they do not know where and how to find shelter against the weather and thus fall victim to bad weather conditions!
Finding suitable sleeping places for the night was never necessary for them during the breeding season, so that these animals cannot manage that and often die of total fatigue!

You can now see that the seemingly harmless and animal-friendly spectacle is actually a game of certain death for these birds!
Therefore renounce this custom!
You should be loyal to each other even without this living symbol if you choose one another!

Text: Gemeinsam für die Tiere (Together for the animals)

And I mean...Wedding pigeons are pets in the strict sense of the word, for whom the “given freedom” is in many ways fatal

The relatively new custom, which is currently a real boom on the Internet and a lucrative business, guarantees cheesy and beautiful photos: the happy couple with pigeons in their hands or the bride in a white dress amid a flock of white pigeons that fly out of a basket.

In contrast to carrier pigeons, wedding pigeons are not allowed any training flights before their big performance.

The reason for this is: White pigeons are particularly often attacked by birds of prey. Therefore, breeders prefer not to release the animals until the deal is closed and the feared loss has already been paid for.

In order to ensure a return of the pigeons, breeders use incredibly cruel methods.
With the “widowhood or nesting method”, monogamous pairs of pigeons and parent animals are forcibly torn from their offspring, which is associated with immense stress for the animals.

But the chance of a successful flight home is very slim for these animals, who know nothing but cages, despite this traumatically induced “motivation”.

Actually, the whole spectacle is nothing more than a devious method to earn a lot of money with the suffering of the wedding pigeons and must therefore be banned!