When it comes to animal activism, I’ve always believed the most powerful tools we have as activists are undercover investigations. The truth is that the majority of animal cruelty at the hands of humans is done for major industries behind closed doors.

From animal farming for food and textiles to zoos and circuses to laboratories, etc. – all of these industries know that if the public saw how they regularly mistreat animals, people would be outraged.

It’s why you can’t just walk up to a factory farm or an animal testing facility, knock on the door, and ask for a tour. It’s why states across the US have passed ag-gag laws that attempt to criminalize undercover investigations.

It’s also why Ringling Bros. is out of business.

While undercover operations carried out by brave animal activists have been going on for decades, there is one activist I’d specifically like to spotlight: Jo-Anne McArthur.

Even if you’ve never heard her name, you’ve likely seen her photographs. McArthur’s award-winning, powerful and haunting work has been featured in National Geographic, HuffPost, and Photolife – among many other media outlets.
Her subject? Animals in the human environment. For more than a decade, McArthur has traveled to over 40 countries documenting how animals are exploited by humans for food, clothing, entertainment, research, and more.

These hens are forced to share a cage with a dead friend.

Her photos have been used by more than 100 campaigns spanning the globe. Each campaign has a similar goal: to end animal suffering. 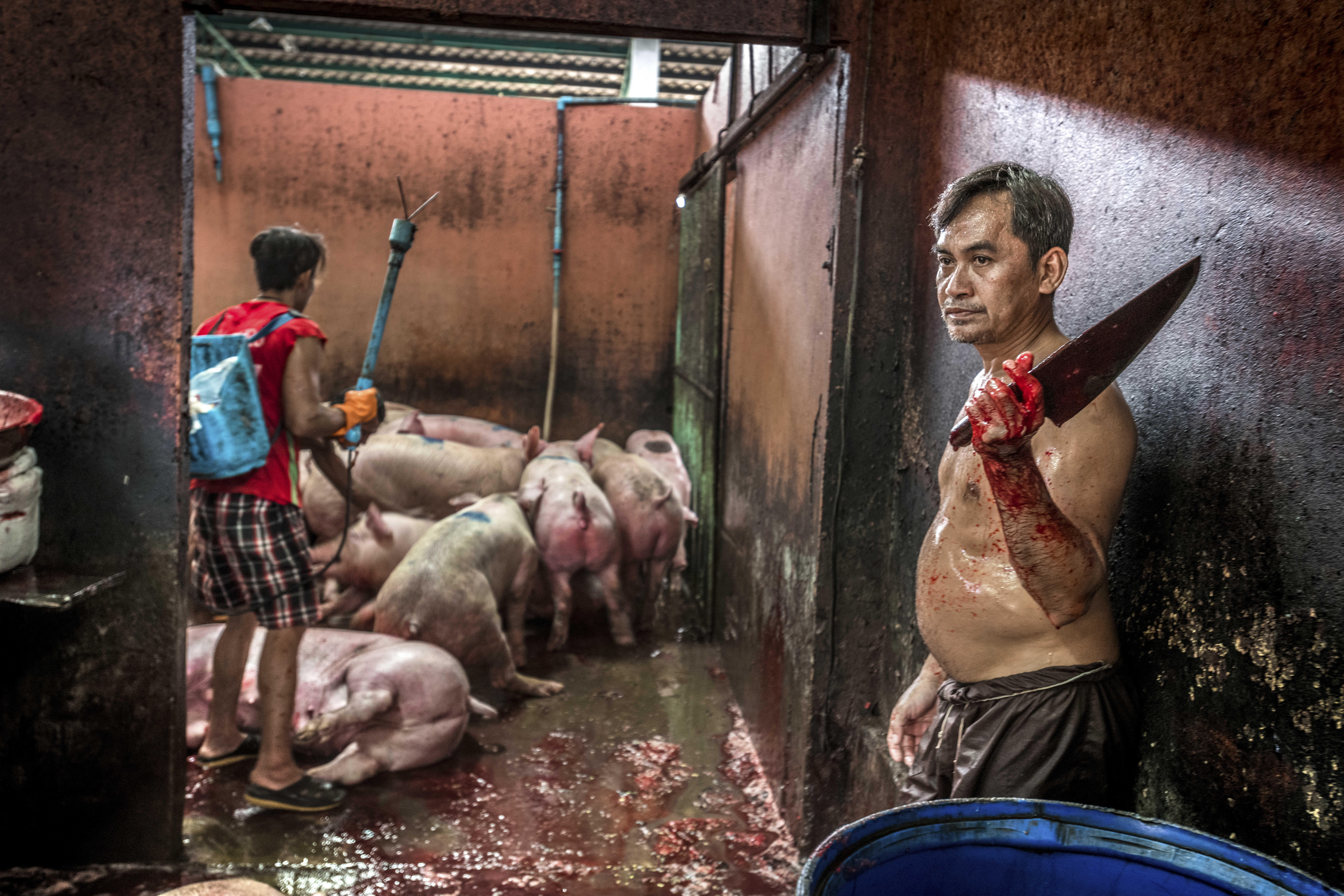 As McArthur looked around, she was shocked by the brutality shown towards the pigs.
She added: “Some screamed. Others seemed mute and immobile. Others shook. Many tried to escape when they were prodded or dragged soaking wet to the kill floor.
Fear is recognizable across most species, and with the pigs here, it is undeniably palpable. “

The photos were so powerful The Guardian published them in an unflinching article that details the horrors of pig farming in that part of the world.
One particularly heartbreaking photo shows a pig kneeling before she is clubbed by workers. In response to this image, McArthur commented on her social media:

“Everyone asks how I can handle bearing witness to so much violence. It is brutal – words are hard to find – but I find catharsis in action, and momentum surges through people who choose to look and not turn away.

Fifteen years ago, it would have been near impossible to get this image seen but we’re amid a global rise of engagement in animal journalism, a collective seeing. This photograph, her story, can foster change, and that is what keeps me grounded”.

The calf has been taken from his mother.

Personally, I’ve always seen McArthur as less of an investigator and more of a war photographer. Her images don’t just document abuse, they transcend, allowing the viewer to peer into the souls of animals. In one image we see despair, grief, and anguish. In another, we see fear, terror.

The term anthropomorphism has historically been used to criticize animal activists for falsely attributing human emotions to animals. That’s rubbish.

Anyone who’s lived with a dog or a cat knows that animals have rich emotional lives.

Looking at McArthur’s images, it is impossible to deny the pain we cause animals. We know it because we recognize it. It’s right there in their eyes.

McArthur’s unprecedented access to some of the most hellish places on Earth and her extensive photo catalog arguably makes her the most prolific and seminal animal photographer of our time. That’s why it’s all the more extraordinary that she’s made her images free through her We Animals project to any individual or organization who advocates on behalf of animals. All she asks is a simple credit.

We Animals is a publicly funded endeavor that allows McArthur to do her vital work. If you’re financially able, I’d urge you to help support it. You can do so here.

McArthur also has two books in print, We Animals and Captive– and she was the subject of the documentary The Ghosts In Our Machine (2013).

McArthur’s groundbreaking workforces the world to bear witness to scenes most would rather not know to exist. But bearing that witness is essential. As she put it in her own words in an interview from 2013:

“We can’t change or care unless we know. Unless we’re told, shown, explained. Exposing the truth is the only hope for animals.”

And I mean…«Good information is hard to come by.
It’s even harder to do anything with them, ” said Sir Arthur Conan Doyle.

With the excellent work of Jo-Anne McArthur and other undercover investigators, we can know what animals suffer in concentration camps around the world.

Although the media have sold their souls to the devil and are information carriers for the meat and milk mafia around the world, we can still find out what happens when we want.
If we want! but the majority do not want to.

This is the world’s worst human character trait: indifference!
And that’s why we still come up with enough excuses not to look facts in the eye, in order not to decide and act …

1. My conscience is clear because I buy my meat from the farmer next door. All of this only happens in Thailand
2. You can actually slaughter animals in small farms, painlessly, and my neighbor will do it.
3. I am actually animal-friendly, I also have dogs myself.
4. Actually, animals are always slaughtered, which is quite natural.
5. If there was something useful in this stupid vegan diet, it would have prevailed.
6. I don’t have a great idea about animal rights and animal ethics, but all of these are arguments that are totally weak.
7. It’s just like that, we can’t change anything

Note: Each of these excuses legalizes your “private choice”.