“You are looking at the most dangerous animal in the world. It alone of all the animals that have ever lived can exterminate (and has) entire species of animals. Now it has achieved the power to wipe out all life on earth.” Great Apes House, Bronx Zoo (NYC), 1963.

The exhibit behind the caged bars was a mirror!!

“No animal ever torments just to torment; but this is what man does, and this is what constitutes the diabolical character, which is far worse than the merely animal”!
‘Arthur Schopenhauer’

Schopenhauer’s words explain why the slogan is correct

Jane Goodall just released her very first cookbook—and it is completely plant-based! Known for her work studying the behaviors of wild chimpanzees, Jane Goodall is a passionate advocate for animals, the environment, and human rights. Her new vegan cookbook, #EATMEATLESS: Good for Animals, the Earth & All, offers around 80 animal-free recipes that are healthy, delicious, and inspiring.

3 EASY WAYS TO HAVE THE PERFECT VEGAN EASTER

3 Easy Ways to Have the Perfect Vegan Easter | VegNews

Be yourself no matter what they say !

“April 1993, about 40 hunt saboteurs were present at the closing meeting of the Cambridgeshire Foxhounds (CFH) at Low Farm near Gravesley in Cambridgeshire.

With the group of saboteurs was Tom Worby, a 15 year old from Milton Keynes, on his first day out sabbing. 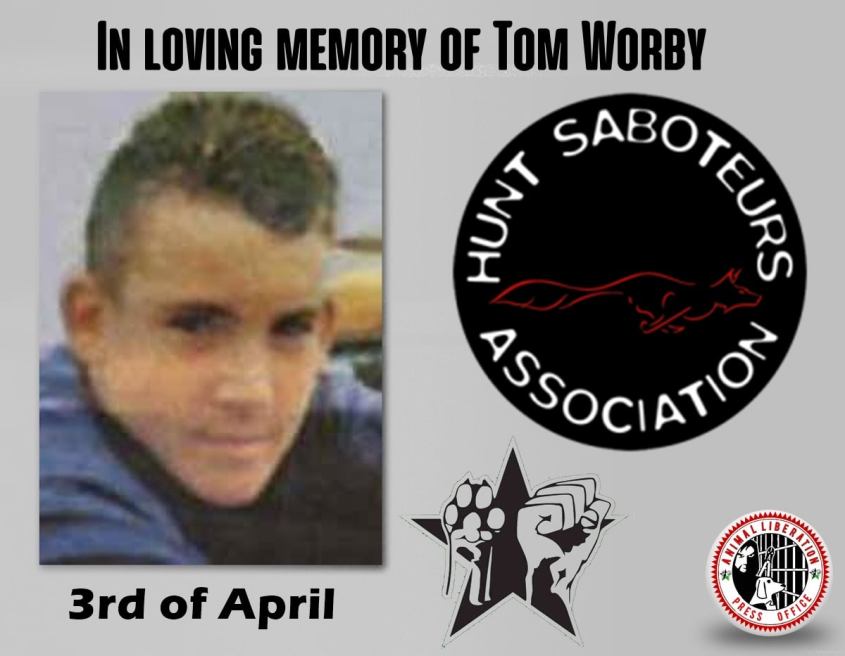 His girlfriend had seen the hunt sab information stall in the city center some days before and expressed an interest to join us. She then came with her boyfriend for their first day out sabbing.

When we saw the hunt, they had just started drawing in a wood neighboring Low Farm. We all went into the fields outside the wood and called the hounds. Some came out, followed by an irate Joint Master, Geoffrey Fox.

After shouting some abuse at sabs, Mr. Fox went back into the wood. Sabs stayed put and kept calling with similar success.

So, the whole hunting field came out, including huntsman and the hounds, and just gathered in the fields adjacent to the sabs. Some lively discussions went on between hunters and sabs and it soon became pretty obvious that the hunters had just called police and were waiting for their arrival.

After a while, one policeman arrived.

He went into the fields and spoke for a long time with the hunters. Then he came over to the sabs and announced that he felt we were trespassing and should be leaving. Sabs told him that this was not his business and that they were just sitting around in the sun and not really breaking any laws.

END_OF_DOCUMENT_TOKEN_TO_BE_REPLACED

METALLICA’s appearance Saturday night (June 28) at the Glastonbury festival marked the first time in the U.K.s event’s 44-year history that a metal act has topped the bill.

The heavy metal giants faced much controversy when they were first announced as headliners — drawing criticism for frontman James Hetfield’s apparent support of bear hunting and with many arguing that the band had no place at Glastonbury, a very laid-back type of festival, with more of a hippie/indie vibe than most.

Indirectly responding to a petition— which came in the form of a now-deleted Facebook page — launched last month calling for METALLICA’s removal from the festival, due to Hetfield hosting a new series about bear hunting on the History channel, METALLICA took to the stage last night to a Julien Temple-directed intro video showing a traditional British fox hunt where all four band members played hunt saboteurs, disguised bears, and killing hunters.

The eight-minute video, which can be seen below, was soundtracked by SWEET’s glam rock classic “Fox On The Run” and included a clip of the classic film “The Good, The Bad And The Ugly”, in tribute to actor Eli Wallach, who died this week.

Watch the video below.

And I mean…This film was funny and clever and they did an amazing performance at Glastonbury leaving everyone pleased. To imitate a good example!