For a few days, gruesome pictures of dead dogs have been circulating on social media in the so-called quarantine station of the shelter for abandoned animals in Stranjanin, which is managed by 𝗝𝗞𝗣 𝗔𝗟𝗕𝗔 𝗭𝗲𝗻𝗶𝗰𝗮 (Bosnia and Herzegovina).

ALBA Zenica is a location of ALBA Berlin GmbH.

In autumn last year, employees at the ALBA Zenica animal shelter in Bosnia and Herzegovina published shocking photos and videos.
The disturbing recordings document the daily suffering of the animals in narrow, dirty cages and the barbaric, massive killing of dogs in the animal shelter.
In recent months, PETA Germany has been in close contact with the informants and Bosnian-Herzegovinian animal rights activists who brought these atrocities to the public.

According to information available to PETA, the ALBA Group Berlin has been financing an animal shelter of the subsidiary Alba D.O.O. since January 2017. (Alba Ltd.) in Zenica, Bosnia, and Herzegovina.
The shelter is owned by the city of Zenica.

As the leaked photo and video material show, the dogs in this facility are neglected and tortured, which is a clear violation of the regulation on the operation of animal shelters.
The images show the rotting bodies of deceased puppies, dogs with sad eyes that are vegetating in their own feces and urine, dirty, empty bowls.

One-shot shows a mother dog with her babies: the dogs are locked in a tiny cage, stacked on top of each other so that they cannot move or stretch out. The material also shows photos of emaciated and already deceased dogs that are scattered in the rain-soaked area.

According to eyewitness reports, they lack food and medical care. Due to the cramped position, mutual attacks often occur.
These biting incidents are often fatal.

Veterinary reports prove violations of the Bosnian-Herzegovinian Animal Welfare Act and the ordinance on the operation of animal shelters when socializing and separating animals.
As a result of repeated warnings from local animal welfare organizations regarding the intolerable conditions, several veterinary checks were carried out in this animal shelter.

They mostly resulted in only minor changes, which, however, did not bring about any real improvement in the situation for the animals.

In the summer of 2020, the animal shelter again received a lot of attention on social media: Whistleblowers had released photos and video material about atrocities inflicted on the animals housed in this facility.

Other documents, eyewitness reports, and original photos that whistleblowers made available to PETA Germany show, among other things, that killings were carried out in a brutal manner and thus constituted a violation of the Bosnian-Herzegovinian Animal Welfare Act.

One whistleblower who documented the cases over a long period of time describes his experience as follows:
“What I had to see is more than horror. Having worked there destroyed my life inside and gave me hundreds of sleepless nights in the sweaty bed. “ 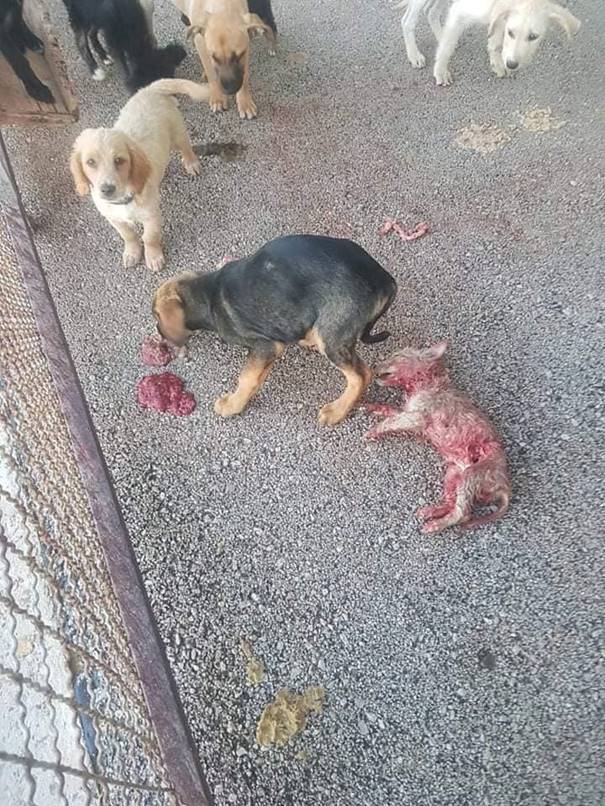 In February 2021, PETA Germany joined the criminal complaint filed by the local animal welfare association SAPA Zenica with the district attorney in Zenica.

The fears of our partner association SAPA Zenica were only confirmed with the pictures published on August 28, 2020: hundreds to thousands of dogs must have been killed there since the opening of the “animal shelter”.

SAPA Zenica has been fighting for the dogs that have been abducted there since 2017. After public criticism about the approach of the dog catcher and the opening of the animal shelter, SAPA is tackled by ALBA in the most massive way.

ALBA made public defamation, including personal attacks and threats against private individuals and their families.

Some dogs could be ransomed, too many others lost their lives there. Because apparently there are no laws in this animal shelter, they simply murder!
The SAPA association has no local support from the population or from politics. A handful of volunteers who fight for the life and survival of the street dogs (and cats)!

Therefore the eyes have to be opened.
SAPA Zenica has already filed a complaint. The animal protection association Franz von Assisi e.V. have already requested ALBA Berlin in writing to act.

The more wind is made about it, the more the pressure on ALBA Zenica and the city administration Zenica is increased so that this comes to an end.

And I mean…We remember the animal catcher business in Romania.
As long as there are subsidies from the EU for these cruel shelters, the crimes will not stop either.

I translated the text of a third petition, which I thought was great and I agree with it.

“It has to stop! Hell for dogs! Zenica- Bosnia, and Herzegovina! EU!

No money! My tax money is not there to kill! They cheat. Sterilization / castration. No! Kill! For the dog catcher, there is 50 € per animal!

The photos above show the illegal mass killing of dogs and PUPPIES in an animal shelter run by ALBA Zenica, which is carried out regularly. Zenica uses the method of regular killing to make room for new dogs. New dogs, give money from the EU.

The authenticity of the photos was confirmed by the veterinary inspection of Zenica-Doboj Canton.

It’s not just in Zenica. Many animal shelters take the money for themselves. And let the dogs starve to death miserably. The syringe is also too expensive. Or they are brutally beaten to death.