Hunland is not waiting for a change in the EU regulations but is developing, in its own competence and in cooperation with animal welfare NGOs, much stricter animal welfare rules for the transport of farm animals than the current regulations, said a Board member after an EU hearing.

As a first step, the long-term transport of unweaned calves will be banned from August, but professionally trained animal welfare officers and body cameras can also come later.

Hunland is implementing a new animal welfare practice in the field of animal transport after the company, which is also active in Hungary, took part in an E hearing on the subject.

The event organised by the European Parliament’s ANIT Committee of Inquiry, a body for the protection of animals during transport, and held in early March was attended by the EU decision-makers, by animal welfare NGOs and by companies active in the sector.
At the constructive event, despite seemingly contradictory points of view, the parties agreed on the need to further improve the EU’s animal welfare situation during transport and to call for even more humane methods in this area.

The expert added that the situation of animals as well as companies and workers in the sector will be better if those involved do not look for faults but actively work to ensure that animal welfare considerations are met during transportation.

To this end, the corporate group proposes to introduce an image and video documentation obligation during certain phases of transport, such as loading, unloading and resting.

The company will also begin training animal welfare officers to oversee the process during transportation, and would also inspect drivers.
In addition, the company manager suggested that the body cameras and webcams of the participants in transport could be used to transparently monitor the transport of the animals so that their treatment could be checked.

“It is clear to Hunland that it will not wait for changes in regulations at national and EU level, but it will introduce significantly stricter rules than the official animal welfare standards in its own area, which it strictly observes during transportation and also shares its experience with animal welfare organisations that express their interest”.

Long-term transport of calves is discontinued

As one of the first steps, the company group will not transport unweaned calves, i.e. calves younger than 90 days, in a long term from 1 August this year, i.e. Hunland will ban the transport of calves that are not yet able to live independently for more than 8 hours.

By doing so, the company is embarking on a more lenient practice than the animal welfare regulations which are quite strict internationally.
The current regulations allow the long-term transport of calves as early as from the age of 14 days.
In the months leading up to the introduction, all Hunland partners will be able to prepare for a practice that will change significantly from August, which will be a decisive step in animal trading. 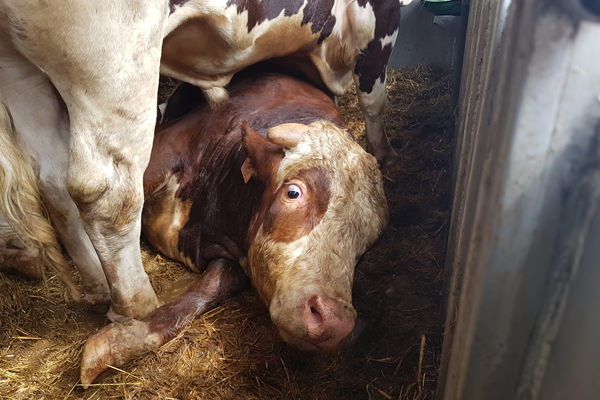 Péter Hencz said about the decision: Hunland’s goal is to actively bring to life a humane and transparent animal transport practice, not by following the rules but by shaping them, in cooperation with the animal welfare organisations.

The ban on long-term transport of unweaned calves is only the first step in this regard.
The Hunland Group will take further pioneering steps in the field of animal welfare in consultation with experts, animal welfarists and partners.

The Hunland Group, which started as a small family business in Dutch ownership, is now one of the most important agricultural players in Hungary.

Originally limited to the livestock trade, the company is now also regarded as a serious agricultural producer, with large capacities in beef cattle, milk production and feed production.

However, the company’s main activity is still the export of livestock: in this field Hunland is a significant player in the Mediterranean region, in the Middle East, in Russia and in the surrounding countries.

And I mean…As early as 2017, the company commissioned the organization Eyes on Animals to hold an animal welfare seminar for 15 employees.

EoA activist reports about it:
“Hunland Transport tries to introduce standards within the company that go beyond the basic minimum requirements of the often vague EU legislation.
They were an open-minded and committed training group. We thank Hunland Transport for their serious efforts.

It will not be possible to stop the transport of farm animals, but every opportunity should be used to significantly improve the conditions for transporting the animals in cooperation with good transport companies”.

On April 20, 2019, Hunland announced its willingness to cooperate in livestock with Egypt via the media:

“The two parties also agreed to import goats, especially in light of high demands from breeders of this strain, which is known with their high production of meat and milk, the statement read.

For their part, the Hunland representatives expressed their willingness to export Holstein calves to Egypt, in addition to providing the technical assistance to the country with regard to artificial insemination and the improvement of Egyptian breeds of cattle to increase their production of milk and meat”, the statement noted.”

Who controls the animal transport when Hunland transports animals in the Mediterranean or the Middle East?

Even the minimum European animal transport regulations stop at the EU borders, as we have seen very often.

Goodwill alone does not help here, we need laws, pressure, demonstrations in front of the EU Commission in Brussels or the EU Parliament.

Therefore: Even the small improvements in the form of Hunland must not give us illusions that the meat industry will take care of the suffering of animals in animal transports, farms and slaughterhouses.
Because that’s part of their business

We welcome Hunland’s decision. And we hope the company keeps its promises.
But our struggle goes much deeper and aims at the end of animal transports.