The Spanish regions have agreed to completely stop the hunt for the turtle dove this autumn.

Their populations are in free fall across Europe – today only around 3 to 6 million pairs breed in the EU, the Spanish hunters alone shoot 800,000 individuals of the endangered migratory bird each season.

After France, Spain is the second major country to initially suspend the hunt for the turtle dove.

Italy, on the other hand, had only recently decided to release millions of animals for shooting again this year.

The Committee against Bird Murder has long been campaigning for an end to the hunt for the turtle dove and other threatened migratory birds – only last year we filed a complaint against France and Spain with the EU Commission, thus accelerating the current decision from Madrid.

And I mean…The lovebird population in Germany has been around since 1980 decreased by almost 90 percent. It is estimated that it is 22,000 breeding pairs at most.

In some regions the species is almost extinct.
The main reason for this is the intensification of agriculture.
It has the effect that the birds find too little food and fewer young birds grow up.

Around two million lovebirds a year are shot in south and south-east European EU countries, including Spain, Greece and Italy, and never return home from their journey from the wintering areas

Malta is the only EU country to enforce exemptions every year for hunting migratory birds in the spring, despite declining numbers.
The hobby hunters of the Mediterranean island of Malta are particularly interested in the turtle dove.

The effects of the corona pandemic are now making it even easier for legal and illegal hunters to shoot the animals.
Controls of the hunters in the field are therefore not carried out at all or completely inadequately.
In spring 2020, under the guise of a quail hunt, thousands of lovebirds were illegally shot on the train into their breeding areas in Malta.

In Spain, France, Italy and Greece only exceptions are made to the rule on lovebird hunting.
Lovebirds are hunted mercilessly! 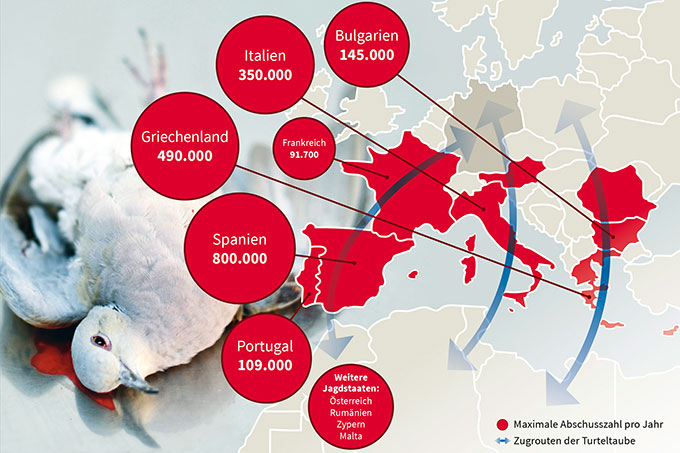 Bans like this one in Spain, which make hunting that was previously legal, illegal, are another important step against poaching and the protection of birds.
And we can only hope that the new law will be closely guarded.