Soy milk, oat milk, rice milk, dozens of types of nut milk … The choice of vegan milk is growing all the time.
We’ll break that down.

Sure, almost everyone knows soy milk by now.
But you can make vegan milk from all kinds of legumes, nuts, seeds and grains.
Basically, all types of plant milk can be used just like cow milk, and very few people will need more than one type in the refrigerator.
In addition to personal taste, it is then above all worthwhile to pay attention to whether you prefer to buy sweetened milk (which is usually as sweet as cow’s milk) or unsweetened milk and whether you value the addition of calcium and vitamin B12.
Our list will help anyone looking for milk for a specific purpose. 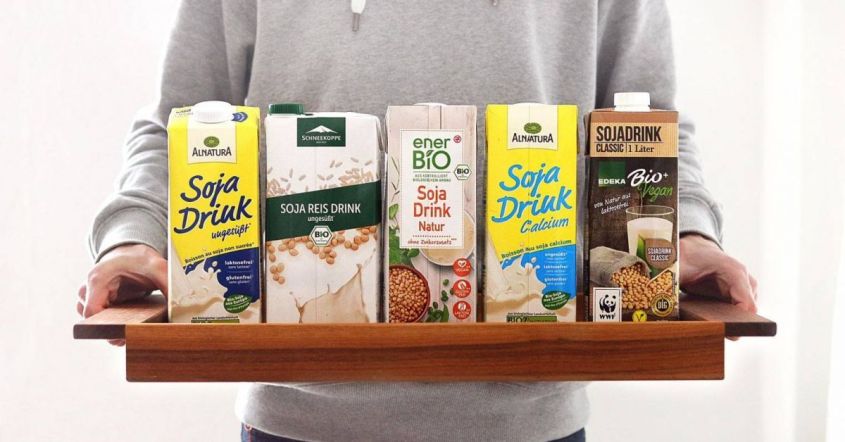 The classic and usually the first alternative to cow’s milk that can be found in cafes or supermarkets. Soy milk comes in all possible variations and mixed forms (for example with rice milk), even if some people still claim to taste the beans through.
Otherwise the perfect all-rounder, as long as you are not allergic.

Another great all-purpose milk that isn’t quite as common as soy milk yet, but is working on it.
Not only great for soy allergy sufferers, but also for people for whom the soy milk in coffee always curdles despite everything.
The best latte art can be conjured up with oat milk.

The most watery and neutral type of plant milk. That can be annoying if you like the hot chocolate rather creamy, for example, but it can also be great if you don’t want to have an exaggerated extra taste with cornflakes, for example.

The plant milk with the strongest taste of its own – and that includes not only hazelnut milk, but also that made from cashews, coconut and almonds, even if they are not nuts from a botanical point of view.
In any case, great for coffee and other drinks that no longer need syrup to taste great.

Rather less suitable for everything that needs neutral milk.
And often simply too expensive for large cookie campaigns and other occasions where the taste is lost anyway.

If you are looking for a specific purpose, our list will help.

The list could go on forever, and there are sure to be people for whom nothing but lupine milk, spelled milk, hemp milk or quino milk comes into their homes.
For a start, however, it is usually enough to start at the top of the list and work your way down until you have found your favorite milk for your favorite purpose.

And I mean…For the majority of our society, the vegan lifestyle is considered an extravagant lifestyle that only people with a lot of money could afford.
This impression can come from looking at the prices charged for many vegan foods – including soy milk.
Vegan alternative products are often 50-100% more expensive than their animal counterparts.

But reality looks different…A vegan way of life is the most cost-effective way of life – if you also include the “hidden costs” of animal production in the calculation.
These include global warming, the destruction of primeval forests, pollution of the world’s oceans and the increasing diseases of civilization that are putting a strain on the health system.
But that’s not all.

In order to produce animal milk, artificially inseminated cows have to be forced to produce milk for life. The suffering of animals is enormous

This is an actual cost.
And there are real problems that cannot always be solved with money and that affect not only those who caused them, but all inhabitants of the earth (and future generations).

Animal products are the main cause of the worst ecological problems – and yet they are so easy to avoid when people become vegans.
Also because there are very good, plant-based alternative products that do not have to go without anything.
They taste good and they protect the environment and animals