Animal abuse in the cattle dragging contest of Gran Canaria! The PACMA files a complaint

We document the cruelty of the “cattle dragging” and denounce several irregularities committed in the final of the Gran Canaria contest.

On July 11, the Grand Final of the XXXIII Dragging Contest of the Island of Gran Canaria took place, a cruelty in which cows, bulls and oxen are forced to pull loads of up to 1,500 kg in races against the clock.

From PACMA we document it to show the violence of this activity and the mistreatment that animals receive, in addition to several irregularities that we report to the Ministry of Public Administrations, Justice and Security, the Ministry of Education, Universities, Culture and Sports, the Ministry of Agriculture, Livestock and Fishing and the Government of the Canary Islands.

We have received a reply from the General Directorate of Livestock of the Ministry of Agriculture, Livestock and Fisheries, thanking the notice and informing that they have requested a detailed report from the Canary Trawling Federation, given the possibility of initiating a sanctioning file that we hope will be make cash.

The suffering of ‘cattle dragging’

In these images, recorded by our team in the Canary Islands, it is clearly seen how the rings or chains that the animals have ringed to the nasal septum are pulled with force, causing them more than obvious pain.
Their deformed snouts and bulging eyes are clear proof of the suffering they are enduring. 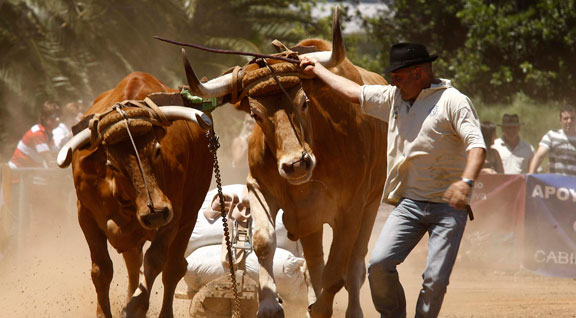 This practice contravenes the Technical Regulations of the Canarian Drag Federation and the Law of Physical Activity and Sports of the Canary Islands and we made it known to the administrations.

In our complaint we demand an investigation and that the pertinent responsibilities be determined, as well as the withdrawal of the license of the people who exercised this mistreatment and their disqualification for the profession, trade or trade related to animals and their possession.

At PACMA, we have been demanding the prohibition of this practice for years, which always implies submission and pain for animals, but, until we achieve its abolition, we will continue to press legal means, denouncing every irregularity to corner those who mistreat animals in the courts.

And I mean…The competition participants invented terrifying lies to justify this brutal sport. They say … “In addition to the fact that this sport is completely harmless to the animals (the rules of the game prevent that), it has also helped to save a native breed of cattle on the island, the Vaca Basta, from extinction”.

The tests are carried out against the clock and have a duration of 3 minutes so that the animals cover the entire distance, except in the special categories cows and bulls (1,100 kg or 1,500 kg train weight), which take 5 minutes.

The winning team will be the one who manages the route, the 70 meters, in the shortest possible time.

Forced and intense exercises, abrupt and violent, cause joint diseases, their nerve endings suffer considerably, and cause severe pain to the animal, which could only be described as animal suffering.

Cows and oxen pant with their tongues sticking out, indicating increased heart and respiratory rates, drool and foam at the mouth. They are reluctant to advance, they go off the track with clear escape attempts caused by fatigue and fear.

The Corsa weighs around 200 kilos (?), which must be added to the load deposited on it and the friction index on the surface.

It is also forbidden to tie animals by their horns, nose rings or legs. As we can see from the photos, it becomes clear to everyone that these animals suffer from this illegal ring, both in herds and in competitions

The reasons why the Canarian Government justifies this activity are based on something that we have already heard with relative frequency in other demonstrations in which animals are invited not to have fun, that is: the recovery of a deeply rooted “tradition”, and the promotion and breeding of the Canarian Breed and the Palmera Breed cattle;

The Government of the Canary Islands, through the Directorate General for Sports, allocates more than 1 million euros (1,020,600 euros) to promote local and traditional sports. The messages do not specifically relate to “dragging”.

We urge that any activity in which animals of any kind are used for fun and entertainment should be declared illegal.
We urge that those farmers who are committed to raising these animals for the sake of maintaining such medieval competitions should not receive any public subsidies

The future belongs to a humane and compassionate civilization.