This is the story of how Kiska, a whale who once lived happily with her family in the Icelandic Ocean, became the loneliest whale in the world:

In August 2011, a somewhat unseemly custody battle erupted between Busch Gardens (at that time the owner of SeaWorld) and Marineland Canada.

Ten years earlier, Marineland had approached Busch Gardens with a view to acquiring a male orca whom he could breed with the female orca Kiska. 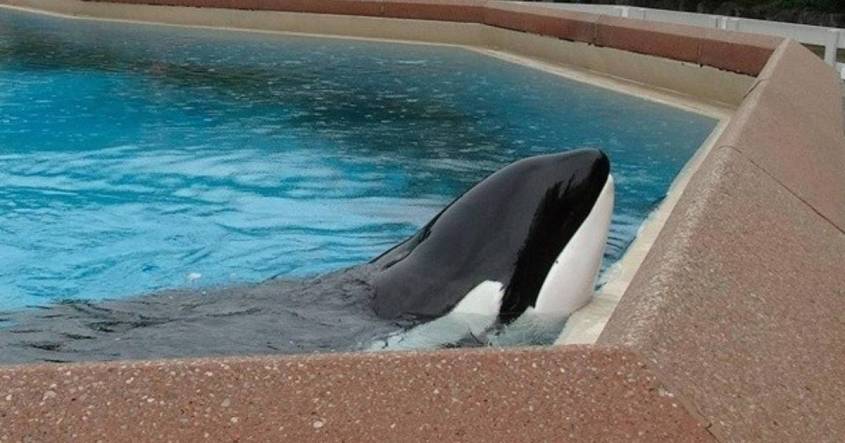 Busch Gardens had been looking for some beluga whales, and was willing to make a breeding loan agreement whereby one male orca one of its SeaWorld entertainment parks would be sent to Marineland in exchange for four belugas.

And so the deal was done. And shortly thereafter, Ikaika, a four-year-old orca at SeaWorld Orlando, was flown to Marineland in Niagara Falls.

“Ike”, as he was generally known, had been developing dental problems, most likely from chewing on the metal bars of his pool, and he needed daily treatment along with antibiotics and pain medication.

The plan was that Marineland would keep up his treatments and although he was too young to breed, he could develop a relationship with Kiska and with Nootka, a younger female orca, and become a father in the coming years.

The contract stipulated that the two companies would alternate ownership of baby whales, all of which promised to be lucrative for both sides.

Nootka, however, died in 2008, and meanwhile Ike’s teeth were going from bad to worse. In 2009, SeaWorld decided they could give him better care and said they wanted him back.
But Marineland didn’t want to give him up.

The dispute, which focused on the terms of the contract, ended up in court. SeaWorld won, Marineland appealed and lost again, and Ike was shipped back to the United States – this time to SeaWorld San Diego, where a 12-year-old orca named Sumar had recently died of a twisted intestinal tract.

For Kiska, Ike’s return to SeaWorld meant that she was now alone. Two years earlier, she had witnessed the death of her fifth child, Athena, at age four.
The bond between orca mother and calf is lifelong, and a growing number of studies suggest that orcas’ capacity to feel deep, complex emotions rivals or even exceeds the emotional capacity possessed by humans.

Since 2011, Kiska has lived alone in her concrete tank. Alone and bored, KISKA has been living in captivity in a tank in Canada for 40 years. No family members swim by her side. No friends invite her to play.

She holds the cruel distinction of being the only captive orca in North America held in social isolation from any other marine mammal.

Video footage and eyewitness accounts depict her behavior as repetitive, unmotivated and lethargic. When not swimming in slow circles, she often floats in place, staring at the emptiness that is the inside of her tank.

We have been documenting this stereotypical behaviour that Kiska exhibits for years.
Below is a video we have provided of Kiska in 2014 displaying the same thrashing behaviour that has recently been circulating and there will also be another video we took posted in the comments below.

We have seen statements and headlines claiming that Kiska is “committing suicide.” Whilst this stereotypical behaviour is a result of poor welfare in captive orcas.

Whistleblower Phil Demers, who used to work at the park, claims 44-year-old Kiska was caught off the coast of Iceland and has been in captivity since 1979.
In a 30-second aerial clip taken by Demers, Kiska can be seen ferociously whacking her head and body against a wall.

The footage was shared on social media with the caption: “This video was taken on Sept 4th, 2021.
Anti-captivity activists entered MarineLand and observed Kiska, their last surviving orca bashing her head against the wall.
Please watch and share. This cruelty must end. #FreeKiska.”

Phil Demers posted a second video that shows a closer image with the orca stirring up the water as she rammed herself against her walled enclosure.

He claimed: “Another angle. This is dangerous and self harming behaviour. Kiska is in distress.”
The footage has been viewed more than 160,000 times on Twitter and has almost 2,000 retweets.
Worried members of the public have been shocked by the video.

And I mean…Marineland is one of the worst places for marine animals in the world.

You can hear every stupid saying … “I love MarineLand” and that means that everyone is only oriented towards having fun with enslaved animals, one thinks it is funny to be splashed by a whale and does not notice Kiska’s pathological behavior, due to her loneliness, her suffering, her miserable life.
Even worse: most of them also take their children with them so that the children can later view the enslavement of the whales as animal welfare
Everyone who buys a ticket for MarineLand is the employer of these animal exploiters, who actually have to earn their own money and do not get rich with the slave trade.