In Canada and the USA they want to mobilize people to vaccinate with lifelong hunting permits, weapons, etc. 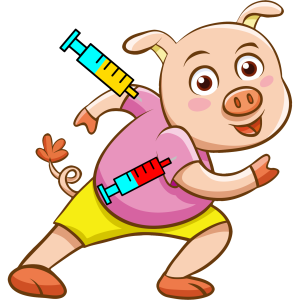 Missouri Governor Mike Parson has launched a cash lottery program for vaccinations.
Maryland Governor Larry Hogan launched such a program earlier this year.
In New Jersey, a dinner at the governor’s mansion was awarded as a prize for a vaccine raffle.
At least a dozen states, including Louisiana, have offered seven-digit awards.

A woman from Calgary, Canada just got a million dollars richer after winning one of the top prizes in Alberta’s COVID-19 vaccine lottery.

“I encourage Albertans who have not yet received their second dose to do so as soon as possible to qualify for the final drawing in late September!” (Prime Minister Jason Kenney)

We still have one more $ 1M prize up for grabs.

You can enter still enter – but proof of vaccination is needed to claim the prize, so roll up your sleeve! 💉”

The state of Utah is offering free beef and year-long beef, pork, and poultry to a family of four in a lottery.

Mayor Bill de Blasio is offering $ 100 for vaccination at some vaccination sites in New York City after French fries at Shake Shack and tickets to the Brooklyn Nets failed to attract enough residents.

Sweepstakes and lotteries were also popular tactics in Ohio, where 10 recently vaccinated winners were given a $ 1 million jackpot, or at the Virginia IT firm Leidos, which donated 10 randomly selected employees an annual vaccination salary.

“Give a man five pounds of ground beef and he will eat for a week; give him a gun and he’ll eat for a lifetime”, according to West Virginia’s Governor Jim Justice.

And I mean…You don’t even have to be a vaccine skeptic to notice that excessive advertising for vaccinations is not necessarily good for your health. Unfortunately this is just no longer noticeable to many individuals.

Here in Germany, the chairman of the German Association of General Practitioners postulates that there is an urgent need for more public support for flu vaccinations !!
“The most important thing for the second Corona autumn will be that as many people as possible get vaccinated, not only against the corona virus, but also against the flu” he said.

Sure, of course! One could also say that no disease is any good if it not makes a big turnover in the right places
All of this only openly shows how dubious, amateurish and unprofessional the governments are currently dealing with the issue.
There is a strong tendency to suspect that they have a completely different, undisclosed agenda on their fingertips.

Fundamental rights, freedoms and personal rights are not the thing for governments.
They think more about the usability of the herd and how it can be regulated even more strictly.