They are horrific scenes (!!!) that they recently played in a circus in Russia.

A brown bear suddenly attacks its trainer – in front of numerous children. In the end, the trainer collapses injured.

Shock moment during a circus performance: children were shocked to see a bear suddenly attacking its trainer. As currently reported by the British “Daily Star”, the brown bear pounced on the woman in the middle of the show and clung to her legs.

The incident took place four months ago in Berezovsky, Russia.

Shocking images show how the animal pounces on the trainer.

Two other trainers are desperately trying to get the beast off the woman. But the bear holds on to her, biting her leg more and more.

The bear – dressed in a hat and glittering scarf – was made to continue performing despite the horrifying attack – and the set upon the trainer again as she dangled a hoop in front of the animal. Eventually the woman collapses in excruciating pain. Again a male trainer intervenes and finally pulls the animal away from her.

The injured trainer did not see a doctor after the incident, it is said. Presumably to cover up the bear attack. And the circus continued the show anyway.

There have been reports of multiple attacks at the circus previously. Some local reports say there was a third attack but still the show did not stop. 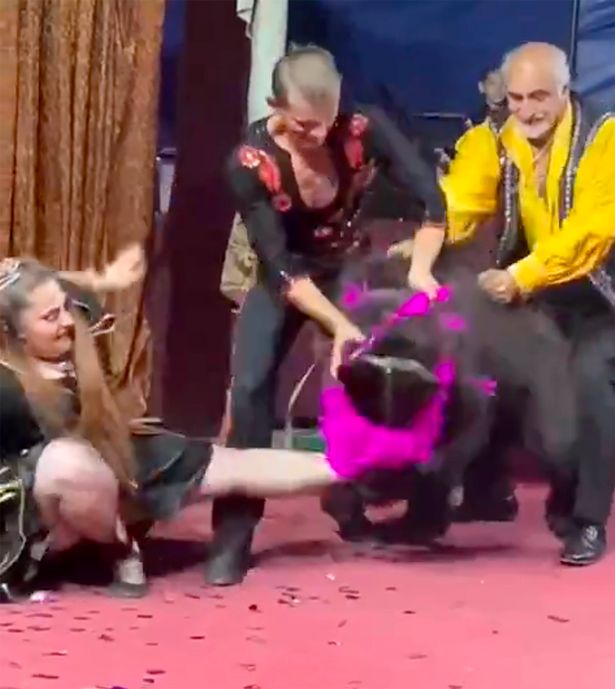 The circus is famous for dressing bears in human clothing, with some even wearing tutus. Although the animals obviously suffer from the circus conditions, the operators repeatedly emphasized that they are proud of “the humane training of their animals” (!!!)

Circus denies bear attack but the Russian Investigation Committee is investigating the case to see if there were any security breaches during the performance. According to the report, there would have been neither a fence nor a barrier to protect the audience.

The Harlequin Traveling Circus later denied there was an attack, despite video evidence.

A spokesman told Mash Siberia: “There was no incident at all. Simply put, the bears are now in the mating season.”

Animal rights activists appalled by “cruel circuses” Irina Novozhilova from the animal rights group VITA called for a ban on all circuses with live animals in Russia after the incident.

“Circuses are always cruel without limits. And circuses with animals should be banned, “she explained.

And I mean…“Shocking scenes?” If anything is shocking, it is the fact that animals in the circus are still allowed to act as ridiculous servants.
We don’t want to imagine how the bear fared behind the scenes after the attack.
The reaction of the circus workers, who forced the bear to continue performing after its attack and also to bow to the audience, suggests the worst.

In addition, according to media reports, the circus denies the attack – although video recordings clearly prove the incident.
Apparently the primitive circus people think their audience is stupid.
Which is not totally wrong, however.
Because who brings their child to such a shit? 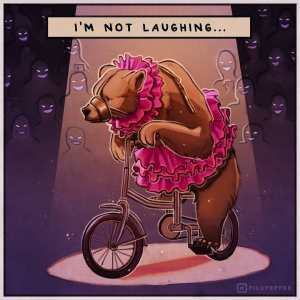 All animal abusers deserve this.
If you decide to train animals in the circus, you have decided to become an animal torturer.
We abhor animal abusers.
We fight for the liberation of slaves wherever they are held and exploited.