The empathy of “animals ” orangutans are usually scared of water due to the density of their fur . This image depicts one offering a helping hand despite the risk.

A good night and regards from Venus

Dr. Don Barnes experimented with animals at School for Aerospace Medicine for 13-14 years.
When he was an experimenter, they conditioned him AGAINST applying ethics to animals who weren’t human.
But Dr. Don Barnes knew that using animals as laboratory equipment was wrong.
“We use the wrong models for our experiments,” he says.
He fundamentally changed his life and became an animal rights activist.

Check it all out by clicking on this link:

With modifications to reflect we are now in 2020.

Eat Love’s founder, Lynn Torres, chose a location in Orange County, California, just a mile away from where she grew up. Hungry customers will have their pick of seitan-based fried chicken sandwiches and bucket meals akin to Kentucky Fried Chicken’s and Chick-fil-A’s, along with delicious desserts, like chocolate-dipped ice cream sandwiches and fudge brownies. Lynn told VegNews:

We are better than KFC and Chick-fil-A because we want to share amazing and delicious food without harming animals and without harming our health. We actually really care about animals, the environment, social issues, your health, and the world. 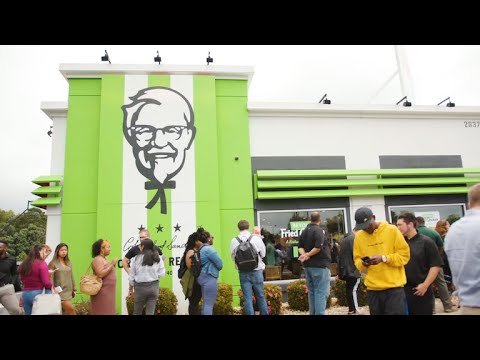 Back in 2015, Lynn and her husband, Enrique, weighed a combined 610 pounds. Once they started eating plant-based, Enrique was able to reverse his Type 2 diabetes, and Lynn lost over 150 pounds! This inspired them to open Eat Love and bring delicious vegan food to their friends, their neighbours, and the world. Lynn said:

I believe that the way we can create change is by spreading love, and to me food is love. I hope that people take our food and share it with their loved ones and that this action brings up a conversation about veganism.

Plant-based fried chicken is certainly a growing trend. In August 2019, Kentucky Fried Chicken tested vegan fried chicken that combined Beyond Meat with their signature secret spices. Customers lined up around the building at the Atlanta restaurant that served the plant-based chicken. KFC is considering moving forward on either broader testing or a nationwide rollout. U.S. president and chief concept officer Kevin Hochman stated:

Inspired to join the plant-based craze? Order a FREE Vegetarian Starter Guide today, and check out our Pinterest page for thousands of recipe ideas!

“When was the last time he ate?”

The answers to questions like these are essential in determining out of the 70-90 emergency calls we receive each day which rescues are top priorities. Even with four rescue vehicles on the road, every day is a rush to get to the next animal as fast as possible. Thousands of callers have stayed by the side of an injured or ill animal keeping them safe until our ambulance arrives. To you wonderful friends, near and far, without whom countless animals would have perished, Happy Valentine’s Day. We just love you.

She looked like an ancient one, shriveled, gnarly and fading away. But this angel was succumbing to advanced mange, which had thrust her into the grip of intense itchiness, and crusted skin which broke apart in massive cracks. Like most mange dogs she had likely run herself ragged trying to escape the maddening itchiness. Now, she was deflated and perhaps preparing to let go of life itself. She faced her regimen of medicated baths with trembling fear, but within a few days came to understand that touch did not have to mean pain; touching now meant comfort. Watch this young lady’s astounding transformation. We named her Shimmer, like dancing sunshine.

For those who have so much life left to live, please donate.

The puppy’s heart was still beating. Otherwise, he would have been mistaken for dead. Neighbors were horrified when they saw a passing car run him over, and his head injury was so severe that he didn’t really wake up for another 48 hours. When he did, he couldn’t eat or walk. But one of the first things he did after regaining consciousness was to wag his innocent, adorable tail, and he managed to communicate worlds with those first bursts of joy–joy to be alive. Meet Dil and watch him re-discover his Self: a boy who is charming, subtle, and beams with love.

Please donate and wish upon a star.

Rakesh Meghwal (above) is a gentle leader in charge of large animal nursing care, introducing new staff who have never before worked with animals to a new world of service to the most vulnerable. From turning a cow on a mattress who cannot stand, or keeping a bull still while his splint gets changed, Rakesh is a teacher, not just a boss. He “leads by example” and we’re grateful to him for his example being so gentle, bright and caring.

Every day, 20-40 animals in Udaipur are rescued and treated.

Some are admitted into Animal Aid’s hospital and some are treated in their own neighbourhoods. Every bandage, every injection, every meal, every cozy tub had a donation behind it.

We’re serving animals like Sophia because of YOU. Sophia’s paw was badly wounded and to see her now, it’s hard to believe this extraordinarily cheerful girl was lost in pain a few weeks ago. Every time a transformation like this takes place, kindness scores a little victory.