Imagine that you are only a few days old.
You are taken from your mother and thrown into a freezing ice bath, until you pass out.
You wake up on a stainless steel table, with all of your limbs pinned down, as your flesh is sliced ​​open with a scalpel.
When the work is done, you are left to writhe in pain.
If you die, it doesn’t matter.

How would you feel if this was your miserable life?
It’s the heartbreaking reality for many of the animals who cross paths with a “scientist” called Tania Roth … 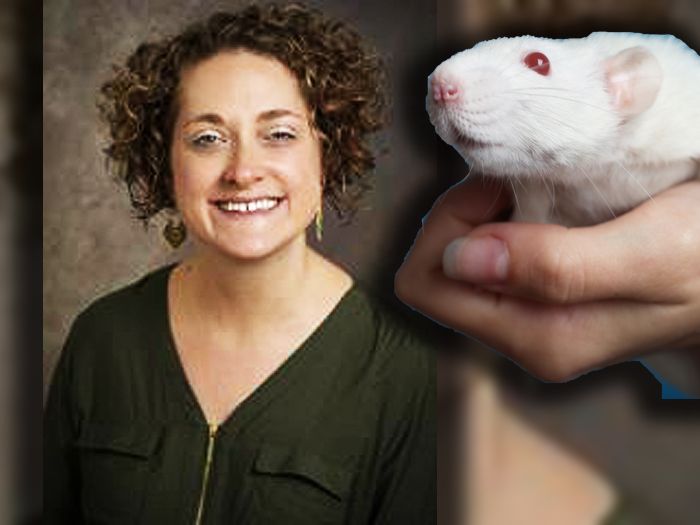 For 18 years, this cruel scientist has subjected animals to torture for the sake of her experiments, and she is funded by the U.S. federal government!
She “has a long and fiendish history of tormenting and killing mice and rats and calling it science, and she has conducted a new round of experiments in which she slashed the spines of day-old baby rats.

Behavioral tests were performed on some of the pups nine days later. Afterward, all the pups were killed and their spines were removed.
Before surgery, the babies were put into a freezing ice bath until they passed out, a painful process called hypothermia that Roth used instead of gas anesthesia. Her publication noted that after surgery, she administered just one dose of pain medication.

There was no indication of any further pain relief.

“The point of Roth’s experiments is supposedly to examine changes in gene expressions in rats after their spinal cords are cut. But much like the full catalog of Roth’s gruesome work, it’s scientifically dubious, at best,” according to PETA.
But that’s just on notch her belt …

“Since 2000, Roth – now at the University of Delaware – has been abusing rats in psychologically distressing and painful experiments.
“Some of her twisted methods include forcing alcohol down the throats of newborns, stuffing pregnant rats into tiny tubes and blasting them with strobe lights, and shocking the feet of rats to terrify them”.

“The tormented rats become fearful, anxious, and depressed – but because of significant biological differences between species, the results of her experiments are irrelevant to human health,” said PETA.

They continued on to say that her list of violence against animals “includes injecting them with opioids, tricking baby rats into believing that they’re in danger by smearing their enclosure with fox urine odor, electrocuting them, and taking them away from their mothers and placing them with traumatized adult rats incapable of taking care of them.
“In another bizarre experiment, she put rats inside a small plexiglass enclosure and allowed a cat to lick food off it.”

The image above, taken from an article on rodent handling and restraint techniques written by University of Notre Dame staff, depicts a restraint tube similar to the ones used by Roth in her experiment.

When Roth says rats are best suited for her experiments, what she really means is that they are cheap and disposable. She has repeatedly shown a lack of regard for sentient life and no qualms about killing large numbers of rats. When her lab became contaminated with smoke from a fire, she had all 75 rats living in it killed just because she could no longer use them.

What sort of madness is this ?

“More than half of Americans oppose the use of animals in scientific research, according to a 2014 Pew survey,” reported Delaware Online.
And with good reason.
We all value science … but not at the expense of unforgivable acts of cruelty to animals.
The path forward is clear.
It’s time for this wicked “scientist”, Tania Roth, to be fired.
That’s why we’re called on University of Delaware’s Institutional Animal Care and Use Committee to do the right thing.

According to Delaware Online, they review protocols for animal use and care, and are authorized to suspend or withhold approval to research activities that violate federal standards.

They can also recommend that UD’s administration fire Tania Roth, so that she can never needless harm animals again. We’ll be contacted administration as well, to make sure they get this vital message.
Don’t you want to stop the cruel, heartless practice of cutting the spines out of babies, along with all the other horrific things she has done?
Then add your name to demand that University of Delaware’s Institutional Animal Care and Use Committee, along with university administration, take action to ensure that Tania Roth is terminated in the fastest possible way!

Federally, Canada has the weakest laws in the western world for protecting animals used in research. Unlike in other countries, here are no federal laws, no inspectors, no public inspection reports, and no way for the public to effectively oversee the secretive activities of animal researchers.

Instead, there are only voluntary guidelines created and overseen by the Canadian Council on Animal Care (CCAC), a non-profit with no legal authority. The CCAC can recommend that the federal granting agencies withdraw research funding from a non-compliant institution.

Add your name if you want to end her career, ASAP!

“We are interested in understanding how environmental factors, such as parenting behavior and social stress, can influence the development of behavior and psychiatric disorders. Our primary interests are centered on identifying epigenetic changes (i.e. DNA methylation) associated with early-life caregiving experiences, particularly maltreatment, and understanding their causal role in behavioral outcome.

All of these psychopaths are funded by our tax dollars. To live out their perverse tendencies towards animals.
It’s useless, non productive, repetitive torture that gives science a bad name and ads nothing whatever of value to the sum of human knowledge when a psychopath massacred animals to find out wich parental behavior causes mental disorders!!!

“There are no data that show you reach a point where you can’t change anything,” she said.

You are right Tania! so we will soon reach the point that your laboratory will shut down.