All the atrocities of industrial agriculture have been summarized in one terrifying photo! 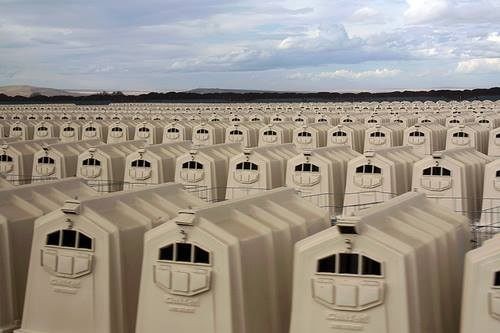 The image you see was not edited with Photoshop. It is a photo of Diane Scarazzini, an animal rights activist, and was taken in an intensive care facility in Oregon.

In each of these boxes is a calf that was taken away from its mother just a few hours after birth. Diane defines him as “doomed to die within a few weeks” when his meat is used and processed into tender steaks …

The calves were separated from their mother after birth, which means enormous stress for both the calf and the mother animal, which are closely linked.

Often, the mother screams for days after the separation to call her little one…

Male calves that cannot produce milk are doomed to end up on the meat market in intensive animal husbandry systems..

The cows spend their lives in a constant cycle of pregnancy, birth and milking. Milk was supposed to feed the little ones, but it is used to produce milk and cheese products.

My comment: Man is the only living being on earth who drinks the milk of another species. Milk is also baby food: Apart from humans, no other living being drinks milk after infancy. Many people do not tolerate milk at all. And yet they drink it because they fall victim to the milk mafia propaganda

Male calves are rated as collateral damage in the meat industry. Every year over 4 million calves are born in Germany. But only a few cow calves are needed for breeding –
most are slaughtered at the age of only three to five months. They are “goods” that nobody wants because they have only costs and no profit.

Factory farming is the other word for animal cruelty!

The animals bred for consumption are treated as goods, as numbers, and not as sentient beings who experience suffering and pain and grief. Cattle are usually castrated and dehorned without anesthesia.
The factory farming system was developed only a few decades ago, so animals did not always have to suffer this way – but today they do! because this planet now has over 7 billion meat eaters. And the environment suffers in the same way.
Nobody likes to deal with the issue of factory farming;  it is extremely uncomfortable, everyone wants his meat and milk, but it causes physical and mental pain to imagine (or even look at) what suffer the animals we eat.

And even in times of a pandemic, politics promise us a return to “normal”, even though today’s pandemic has arisen because everything in our consumption was not normal.

But it is necessary that we show it.
Because it takes courage and willingness to take risks, which (at the moment) very few do.

We will definitely fail if we continue as before.

My bestr regards to all, Venus

One thought on “cemetery of living calves”