Together we can do it. If we respect their fundamental rights to freedom, life and self-determination.

The death of a strictly protected lynx is currently causing outrage in the Czech Republic. The wounded animal caught the eye of a former forest ranger and could still be caught, but despite veterinary care, the wildcat died a little later, as was known on Friday.

“The animal was stressed and emaciated, it must have suffered from pain and hunger, “ said Frantisek Jaskula, head of the Beskydy landscape protection area in the east of the country (see map in the link).
It has been the fourth lynx in the region to fall victim to poachers since 2000.

Animal rights activists had been watching the lynx for years and baptizing Olda. Since his birth in 2011, he has appeared around 800 times in camera trap images in the region.
In the Czech part of the Beskids, a mountain range of the Western Carpathians, there are barely a dozen lynxes left.

Popular fur: Lynx almost eradicated centuries ago
The Eurasian lynx is the largest cat species in Europe and can be recognized by its long brush ears.
In earlier centuries, the lynx was hunted for its fur and almost wiped out.

And I mean … No! They weren’t poachers, they were hunters.
There is no difference either; no matter by whom, it was a crime.

This could have been commissioned by a wealthy collector so that Olda would decorate a psychopath’s living room as a carpet.

This gang of murderers is supported by important politicians.
Most hunters come from the wealthy social classes.
They are doctors, lawyers, judges, industrialists, politicians, the military … psychopaths who pay a lot of money for their sick, bloody pleasure.

Lynxes and many other wild animals are threatened with extinction.
Nevertheless, they are killed out of sheer lust for murder. Mostly as trophies.
For this, these “people” are willing to pay a lot of money.

The more endangered an animal is, the more expensive it is to shoot.

The hunting lobby also seems to have enormous power in the EU, for example, trophy hunting is even supported by the EU.

For your information: Safari Club International is also available in Germany!
This is where the hunting enthusiasts meet regularly for a “round table” in Munich.

By now at the latest everyone should know why the EU does not want to ban the trade in trophies.

Certainly very few people know that despite protests from their own ranks, the EU Parliament has spoken out in favor of a legal and sustainable trophy hunt.

Damned Oldas killer!
And hopefully his life will soon end in unbearable pain-
to put it in the language of the murderers!

WAV Comment – how disgustingly sick is this ?; that thousand, maybe will be tens of thousands of innocent, living (if you can call the factory farm system that) animals suffering life long incarceration in intensive farming systems; being pumped full of antibiotics, and then finally hauled out of their bars and destined for crappy virus spreading meat processing facilities are now being killed; chopped up into little bits, mixed with wood chippings and spread all over the land !

“An incident management team that includes staff from the Board of Animal Health is overseeing the composting operation to ensure the compost pile is constructed correctly. Proper construction should eliminate the attraction of flies or scavengers, and should not emit an odor, Crusan said”.

Another example of what the ‘meat eaters’ are enforcing on everyone, including those who find this issue as sick as we do. Talking of sick; lets hope that everything goes as the Board of Animal Health suggest and that citizens don’t get sick. 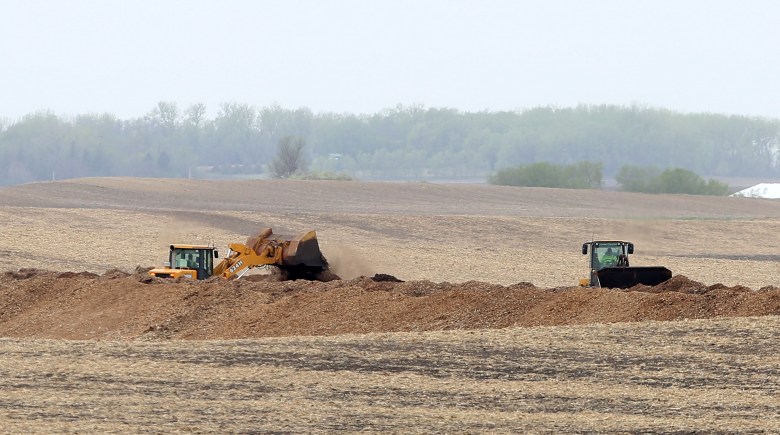 ROUND LAKE, Minn. — A parcel of land in Nobles County has been transformed into a major composting operation for euthanized hogs coming from the crippled JBS pork processing plant in nearby Worthington, as well as hogs from area farmers.

Mike Crusan, communications director with the Minnesota Board of Animal Health, said delivery of hog carcasses to the southwest Minnesota site began over the weekend. The parcel of land can accommodate the delivery of up to 2,000 head per day, though it hasn’t reached peak capacity at this point.

JBS announced last week it could euthanize 3,000 head of market-weight hogs per day because they couldn’t be processed before they grew too large for slaughter and packaging. The JBS plant in Worthington shut down temporarily because of an outbreak of COVID-19, the illness caused by the coronavirus, among workers at the plant. On Wednesday, it resumed operations but at reduced levels.

Crusan said the site northwest of Round Lake would not have been chosen if there were any potential environmental risks.

An incident management team that includes staff from the Board of Animal Health is overseeing the composting operation to ensure the compost pile is constructed correctly. Proper construction should eliminate the attraction of flies or scavengers, and should not emit an odor, Crusan said.

“It should just be, to the naked eye, a pile of wood chips out there,” he said. “The wood chips over the top of the pile, beneath the pile and all around it are going to be keeping all of those odors and all of those things contained as the microbes inside the pile do their work.”

The Minnesota Pork Producers Association is working with the team to establish three other composting sites in the state.

“They are trying to find other areas where there are congregations of large swine operations so they can better serve those people with a centralized site,” Crusan said, adding that farmers will have the option to deliver hog carcasses to those sites or compost on their own property.

The hog carcasses delivered to the Nobles County site will be run through the chipper simultaneously with the wood material — a new concept in the hog industry.

“This whole approach … began being evaluated in composting just within the last year because of African swine fever,” Crusan said. “The pork industry nationwide was studying ways of effectively composting mass carcasses if we were to get that in the United States.”

Chipping the hog carcasses with the carbon material was studied in the Carolinas, Crusan said.

“This is one of the ways we know that we can effectively compost and probably speed up the composting process,” he said.

Crusan said they don’t yet know how many days it will take for the hogs to be fully composted, though it will be considerably shorter than the 60 days it takes for a fully intact carcass to be composted.

Once the composting process is complete, the material can either be spread over the land or incorporated, adding nutrient-rich material to the soil.

A third-party contractor was hired to operate the chipping equipment and build the compost pile in Nobles County. The composting service is being offered to farmers at no cost to them, other than trucking the carcasses to the site.

Hog producers are welcome to contact the Minnesota Board of Animal Health with questions regarding composting hog carcasses by calling 651-296-2942 or emailing animalhealth@state.mn.us.

The agency also has a guide for carcass disposal on its website, mn.gov/bah/carcass-disposal.

There is new hope in stopping the horror: A bill proposed in the NY State Assembly could finally ban these horrifying live animal markets. Sign now to help this crucial legislation pass.

UPDATE: New York officially introduced Bill A10399, “an act to to amend the agriculture and markets law, in relation to prohibiting the operation of establishments where animals and/or fowls are slaughtered and butchered for food.” Sign to urge leaders to pass this important legislation and immediately shut down all live animal markets in the state.

New York state should lead the world by example. How? By immediately closing down and permanently banning all cruel and dangerous live animal “wet” markets.

New York is the epicenter for the global COVID-19 pandemic, and just like the wet markets in China that gave birth to the crisis, more than 80 dangerous live animal markets are operating today in New York City alone, despite the New York State of Pause Executive Order.

Soaked wet with blood, guts, feces, and other bodily fluids and parts, these markets are ideal environments for the incubation and spreading of zoonotic diseases, as a mix of animals are jam-packed into tight cages awaiting slaughter.

NYC is particularly susceptible to a new, even more uncontainable virus spreading through its population of over 8 million people, as all residents live in relatively close quarters. As live animal wet markets remain open, public health and safety are at risk. In addition to the current uncontained COVID virus, new variants of COVID could emerge, reinfecting humans and causing a global viral pandemic relapse. Such introductions could be more deadly, and plague even more people globally.

The facts are clear: live animal markets — whether in Wuhan, China or on the streets of New York — are breeding grounds for deadly zoonotic diseases that then become communicable human-to-human viruses. The government must immediately shut them all down in the interest of public health and safety.

Sign this petition urging lawmakers to do everything in their power to shut down all live animal markets in the state of New York.

We think of the mothers who cry for their children with endless grief, cries and lamentations that only few people hear.

If we give them back their natural rights, we lose nothing but the privilege of torture and murder