Down is the lower plumage of water birds such as ducks and geese. Down is very soft and protects the animals from the cold and heat. 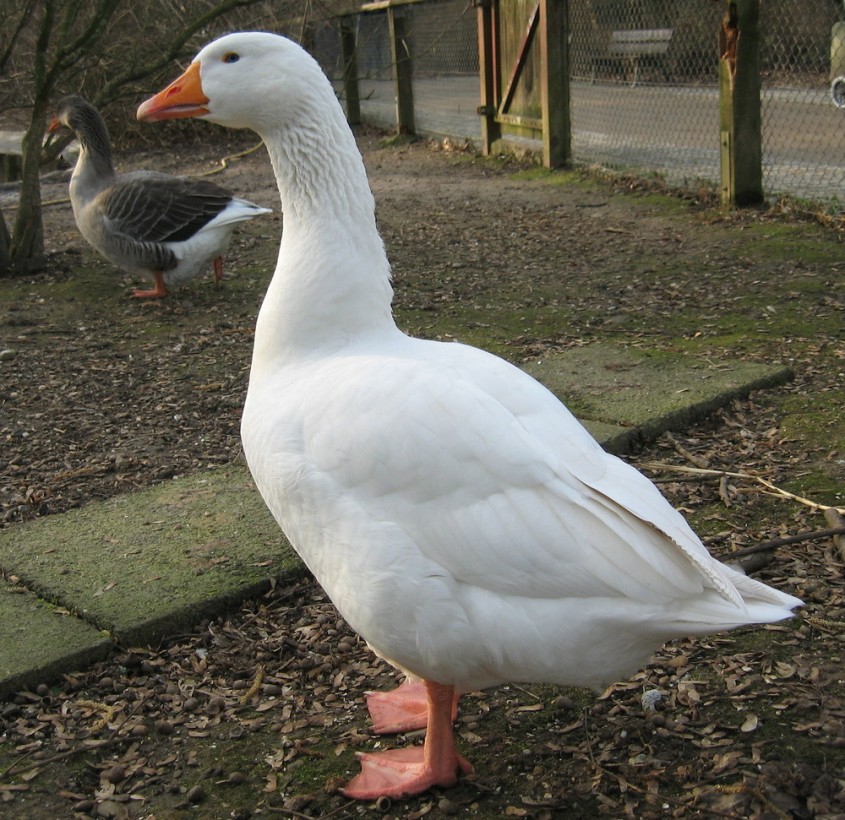 They differ from other feathers in that they do not have a quill and are very light and heat-insulating.
The down industry tries to take advantage of these properties.

In Germany alone, 19 million ducks and geese are killed every year in order to rob them of their feather clothing and use them to manufacture products such as jackets, sleeping bags or blankets.

All over the world, animals are torn from their bodies under the term “live plucking”, even when they are alive.

Most of the down comes from China, where live plucking is common practice.

Over 80 percent of the down traded worldwide comes from Asia and is sold from there all over the world.

In Europe, most of the feathers come from Hungary, Romania and Poland. In all of these countries, goose plucking is often practiced in addition to the dead, in order to “harvest” feathers from each animal several times.

For this purpose, the frightened animals are fixed up to four times a year, and workers pluck entire tufts of feather from their sensitive skin under time pressure.

Often this happens so roughly that the wings of the animals break or their skin tears open. The workers often sew the wounds themselves with needle and thread and without any pain medication.

At the same time, they are fattened so that the goose can be used twice.

For foie gras, ducks and geese are confined in tiny cages and stuffed.

For this purpose, a tube is pushed deep into their throat, through which up to one kilogram of a salty, fatty corn porridge is pumped into their stomach every day.
In short time, the animals are completely fat and their livers have inflated ten times their normal size.

They are then killed for the production of liver pate and their feathers sold to dealers.

What is the legal situation in Germany?

The plucking of live birds is prohibited in the EU.

However, the law leaves a loophole open by allowing the plucking of animals that are in the moult, the time when their plumage was naturally released.

However, with the thousands of animals that are plucked in chords several times a year in each fattening farm, it is impossible to wait for the moulting time for each bird.

Violent live plucking was also uncovered in Germany, and in other EU countries such as Hungary or Poland, the method is standard practice in many companies despite the ban.

The down industry has introduced a variety of its own seals to calm the conscience of customers and dealers. However, they all have one thing in common – they are ineffective when it comes to animal welfare.

Many companies attach certificates to their down articles, which promise the customer that no geese have been plucked alive for their products.

However, since the controls are inadequate and the trade and production chains for down are very non-transparent, many traders cannot prove which type of plucking the down they actually use comes from.

But birds that are only plucked after slaughtering often live on dirty, stinking farms and are violently killed in the slaughterhouse. That is why down from the “dead pluck” is not an animal-friendly alternative.

Nobody has to warm or adorn themselves with the feathers of tortured animals. Cotton, viscose, lyocell, polyester, Primaloft or the Kapok plant down are available today.

High-quality vegetable or synthetic materials provide excellent insulation and have the advantage that they are easy to care for and suitable for allergy sufferers.

And I mean… Like all animals that are bred and kept for the production of any commodity, the life of the down geese is a horror life.

They are crammed together in thousands in factory farming and live there similarly to slaughter chickens. Three times a day, hoses drop from the ceiling, which give them a bland, tasteless porridge, and plenty of water at the push of a button.

When the geese are fully feathered, the workers grab them by the neck and take them to a separate room.

Other workers are already waiting here, sitting on long rows of chairs. 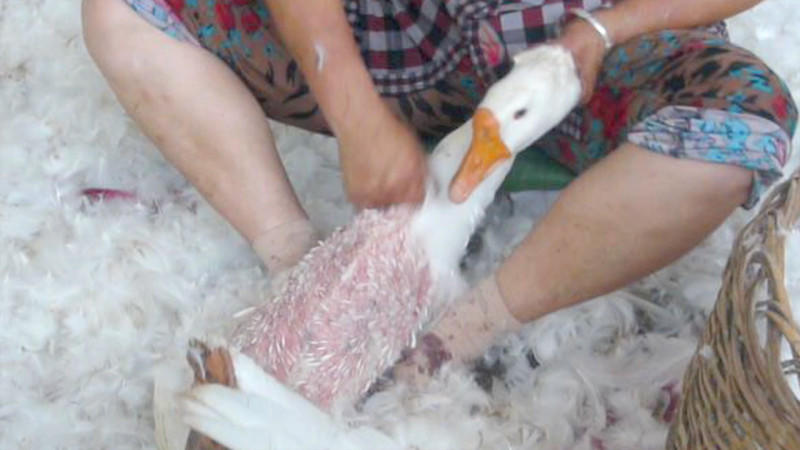 They lay the geese on their lap, stomach up, pinch their necks under their arms and pull out the birds’ feathers in an incredible routine and speed.

The geese scream in pain. Thea don`t get anesthetic and are fully conscious.

The naked geese are running around, completely distraught, trying to hide behind hay bales. They freeze terribly and only survive the torment due to medication.

They have to endure the procedure helplessly, four times a year.

They are plucked completely every three months. If they are so destroyed that another round would not be carried, then they go to the slaughterhouse. The last 14 hours of their lives are starving.

Then they are collected together up and locked in tight transport cages.
They are crushed and suffocated, or simply fall victim to their excessive strain.

That`s  the end of a bleak and painful life, a life as a down production machine that is not even recognized as a living being.

That is the cruel truth behind down production.
Do not buy down products, do not support animal torture.