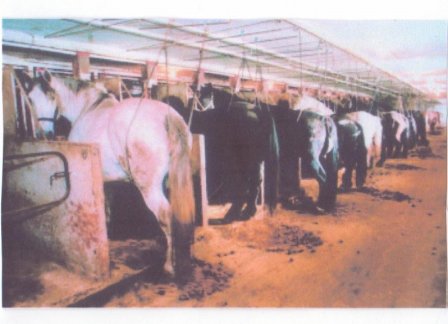 The estrogen-rich urine of pregnant mares (PMU = Pregnant Mare Urine) is a lucrative source of income for the 600 PMU animal factories.

The 75,000 mares in these PMU animal factories spend the majority of their long pregnancies tied up in small boxes, connected 24 hours a day to a device that collects their urine. The mares can barely move, lie down comfortably, roll on their side or lay their head on the ground and rest.
Many mares have to be slaughtered because they become lame as a result of the lack of exercise. 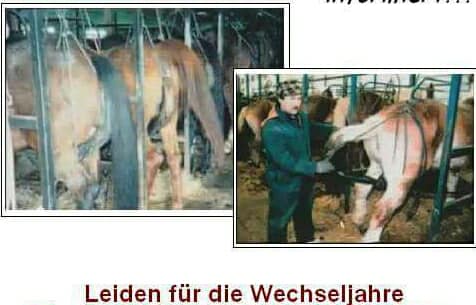 Pregnant mares have to stand in very narrow stall compartments of about one and a half meters wide and two meters high to collect their urine. Between the third and ninth month of pregnancy, the urine of mares contains a particularly high amount of estrogens.

A rubber collecting container is attached to the vulva of each mare and collects the urine. The urine flows through a hose into a plastic canister. The mares are tied up in the stable compartments and can hardly move.

The mares have to stand there for up to six months. The urine collection device causes inflammation, chafing and open injuries. Due to the permanent standing, the mares suffer from severe pain and even bone changes.

Thousands of horses around the world are tortured for the pharmaceutical industry.

Hormones, so-called “conjugated estrogens”, are extracted from their urine for the treatment of symptoms during and after the menopause.  Most of the approximately 75,000 foals that are born each year are taken from their mother gone after four months. The foals are sold at meat dealers or fattened on the farm and later brought to the slaughterhouse

My comment: A few years ago, most of the production farms were still in Canada and the United States. There are now only a few left there. A large part of the production was relocated to other countries with presumably even lower control frameworks, for example to China or India.

Hormone preparations made from mare urine such as “Premarin” have been on the market since 1942, although the equal effectiveness of herbal substances and various alternative treatment methods have been known for many years.

Since then, pharmaceutical companies have made billions in sales.
When it became known in 2002 that the drug “Premarin” significantly increased the risk of cancer, heart attacks and strokes in women, demand initially collapsed.
In 2012, it was also determined that taking PMU preparations can promote breast cancer.
The patent holder of this active ingredient, Pfizer, the world’s second largest pharmaceutical company, has responded very cleverly to public concerns and is back in the PMU business thanks to a new drug.

“Duavive” (in the USA “Duavee”) is the name of the “magic drug” that is supposed to prevent osteoporosis in addition to menopausal symptoms such as hot flashes and sleep disorders.

In truth, however, it is just a PMU drug with the same composition as Premarin.
In Germany the preparation is sold under the name “Presomen”. Online providers even sell the “good old” Premarin without a prescription. The mare urine business is still worthwhile for the pharmaceutical industry.

Put your doctor under pressure to prescribe preparations that are not produced with the suffering of other mothers.

My  best regards to all, Venus