Wikileaks has helped Sea Shepherd in the past by exposing the collusion between the Australian and Japanese governments over whaling and their mutual opposition to Sea Shepherd’s interventions.

Wikileaks also revealed some of the truths about the horrific slaughter of dolphins in Taji, Japan.

Julian Assange is a member of an endangered profession – REAL journalism.
The efforts of the mass media to demonize Assange have been despicable.
His only “crime” was exposing the truth and exposing real crimes against humans and the environment. 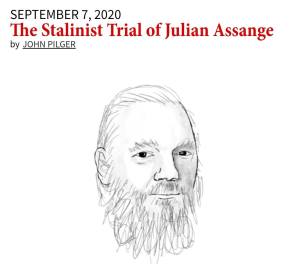 Assange is now on trial in the UK, a process that is nothing more than a show trial where the verdict was passed before he even went to court.
The US, UK, and Australia intend to make him suffer for the many times he has exposed and embarrassed so many powerful and corrupt leaders.

How can the US convict a man of high treason if he is not even a US citizen?
Why is Australia so complicit in the conviction of one of its own citizens?
Why is the mainstream media trying so hard to throw one of the world’s greatest journalists under the bus?
In my opinion, Julian Assange is the most important journalist in the world today.

He has fought to uncover truths, and the message that the powers that be should send is clear: “Do not try to expose our attacks, our crimes and our corruption or anything else!”

And I mean…Isn’t it the same as what the German Agriculture Minister Klöckner said?
“We don’t need self-appointed stable police to check compliance with the animal welfare law in the stables.”
What was meant by that: We, as a government of agricultural lobbies, cannot afford to bring the truth to light.
And severe penalties were announced.

We cannot protect animals when we fear the daily conflict with the system.