But behind the scenes there are sick piglets in the aisle, injured pigs are not treated. Dirt and boredom …

Fully slatted floors are popular in Austria’s agriculture: Concrete slabs with crevices ensure that urine and feces drain off and save farmers so much work (!!!)

60 percent of all Austrian pigs never sleep on straw, but on concrete for their entire life. And that although over 80 percent of Austrians are against this practice. Because life on hard concrete not only causes animal suffering but also diseases in pig farming.

If you ask the Austrian Agriculture Minister Köstinger about keeping pigs on so-called fully slatted floors, she refers to the role of consumers.

She puts the responsibility on the consumer.

They are not prepared to spend more money on meat from animal welfare. The consequence would be that domestic companies no longer meet the demand in the country, instead, they are imported cheaply from abroad.

But how are meat buyers supposed to know how animals live when there is even animal suffering behind the AMA seal – as the Association against Animal Factories (VgT) recently demonstrated?

A piglet that was put to death in the corridor between the boxes.

One solution to this misery would be the complete ban on fully slatted floors, as animal rights activists have been calling for for years.

A request to this effect was rejected by the government. Only the list “Now” (Jetzt) and the SPÖ (social democratic party of Austria) agreed.
So far nothing has changed in the matter.

Pigs smeared with excrement, weak animals lying on the ground, and trampling over each other, pigs attacking each other, open wounds, and fist-sized ulcers. 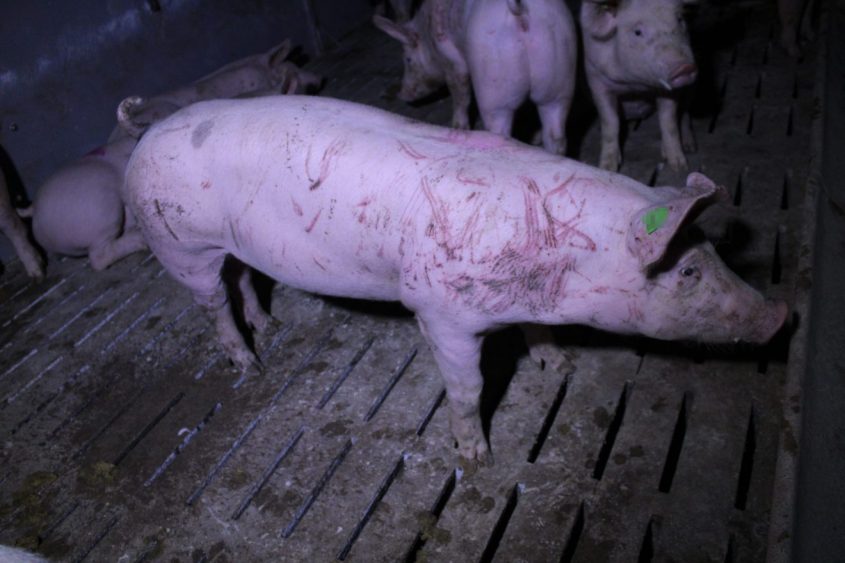 An animal injured by fellow species.

The images published by the VGT are not for the faint of heart. It’s hard to believe: the pictures and videos come from Austria, even from an AMA-certified company. (Declaration on AMA certification: The AMA seal of approval can be used to mark foods that exceed the legal requirements in terms of quality and whose origin is clearly traceable.)

Pigs are extremely intelligent and social animals. In the narrow pits, there are still fights among the conspecifics. There is neither enough space to evade each other nor any form of variety, explains the VGT. That makes the animals aggressive, they hurt each other.

The video by the VGT shows that injured and sick piglets are not cared for. Instead, they just lie in the aisle between the boxes so as not to be trampled on by the other animals.

Pigs that live on full slits are more likely to have injuries and ulcers.

For years animal welfare associations have been criticizing the fact that fully slatted floors are still allowed in pig farming in Austria.

Instead of regularly clearing out litter made of straw, many fattening farms keep the pigs in boxes made of concrete slabs with up to 1.8 cm wide crevices through which the animals’ excrement and urine should fall. There is a manure pit under the stables.

That saves time, work, and, above all, money.

If you ask pig farmers, they answer that the perforated floors keep the floor surfaces and the animals dry and clean. In addition, concrete floors without litter also provide cooling for the pigs in summer. The Association of Austrian Pig Farmers also points out the hygienic risks of litter, which can lead to increased bacterial load, fungal and mold toxins, dust, or parasites.

Animal rights activists contradict this vehemently: On fully slatted floors, the pigs grow up on their excrement. The hard surface is bad for the joints and the tightness bad for the psyche and social behavior. The result: aggression, disease, and poorly healing wounds.

Over 60 percent, i.e. 1.5 million pigs, lived on fully slatted floors in Austria in 2019. The six months that they live between birth and slaughter, they see no straw and cannot lie softly, search, or play. This not only makes the animals aggressive but also sick.

The pigs become aggressive in a confined space and bite each other’s ears and tails.

For a study by the veterinary medical faculty of the University of Munich, a total of 948 pigs were autopsied in 2015 at three Bavarian slaughterhouses with fully slatted floors. The result: only 8.2% of all pigs had healthy bursae in their joints. Everyone else suffered from inflammation in their joints.
Another study from 2005 shows that animals on straw show hardly any joint inflammation.

Mortality, i.e. the rate of pigs that die before slaughter, is also much higher: About three times as many pigs die on fully slatted floors as on straw farming.

“Since the regulation on pig keeping according to the Animal Welfare Act is so bad in Austria, pigs can be kept on fully slatted floors. With all the consequences, such as bitten off tails, injuries, and joint inflammation, but also endless boredom, bad air, and no employment opportunities, ”criticizes Martin Baluch from the VGT.

Because there is absolutely nothing to do on the slatted floor, the animals can only chew on each other.

According to an EU minimum requirement, Austrian law stipulates that pigs must live “comfortably in terms of size”. However, this is a translation error, because it should actually mean “physically pleasant”.
What sounds like sophistication is essential for a pig’s life. Because nobody can deny that fully slatted floors are not “physically pleasant”.

The Austrian animal protection laws actually fall within the competence of the Ministry for Social Affairs, Health, Care, and Consumer Protection. However, the Ministry of Agriculture has a veto right.
The Austrian Minister of Health, Rudolf Anschober, has praised the improvement in the situation since he took office.
Unfortunately, the approval of Köstinger is necessary.
Animal welfare laws must be drawn up in agreement between the two ministries.

But the real problem lies one step further: Even if a corresponding law is passed, there is a regulation from the Ministry of Agriculture that explicitly allows fully slatted floors. As long as this exists, the official veterinarians who control the farms will not object to the conditions.

She has made it clear! Köstinger does not intend to change the situation: Austrian pig fattening is exemplary, she says (!!!)

The minister has not spoken to any animal welfare organization since taking office. She refers to Minister Anschober or her office – but this has no competence.

When the VGT wanted to hand her a petition with over 50,000 signatures, she did not give an appointment. She just didn’t answer the appointment request. “I find it questionable that an elected representative of civil society simply does not answer,” says Baluch in a contrast interview. As a minister, she has to give citizens an answer.

The VGT now tries three to four times a week to reach them for appointments. With protest actions he draws attention to the grievances in pig farming, says Baluch. But it doesn’t help.

“Elisabeth Köstinger disappears through the back door, even lets herself be denied by her driver, and refuses to accept a petition with over 50,000 signatures, ”criticized Baluch.

Image VgT: “Is it really too much if we give animals at least the simplest livelihoods such as some straw?”

And I mean…Yes! when it`s about corrupt politicians, it is too much.

The Agriculture Minister Köstinger has absolutely no qualifications for this post, she has climbed with connections at this function
If she wants to stay there, she has to do what her country’s meat industry orders.
Therefore, she not only allows these miserable conditions but secures them legally.
She doesn’t give a shit if 50,000 citizens of her country have signed up against this misery.

She knows (and interests) so much about democratic processes as she does about animal welfare.
Don’t forget: She is not elected by the people anyway, but by the Federal Chancellor, who protects her.

The belief that we are ruled by thieves, cheaters, and animal haters grows every day more and more…