Fish don’t audibly scream when they’re impaled on hooks or grimace when the hooks are ripped from their mouths, but their behavior offers evidence of their suffering—if we’re willing to look.

Biologist Victoria Braithwaite says that “there is as much evidence that fish feel pain and suffer as there is for birds and mammals.”

For example, when Braithwaite and her colleagues exposed fish to irritating chemicals, the animals behaved as any of us might: They lost their appetite, their gills beat faster, and they rubbed the affected areas against the side of the tank.

It is hard to imagine that swallowing a bait with a fish hook in it does not feel extremely painful.
The fish also shows a terrible fidget in the video in response.

Neurobiologists have long recognized that fish have nervous systems that comprehend and respond to pain.

Even though fish don’t have the same brain structures that humans do—fish do not have a neocortex, for example—Dr. Ian Duncan reminds us that we “have to look at behavior and physiology,” not just anatomy. “It’s possible for a brain to evolve in different ways,” he says.

“That’s what is happening in the fish line. It’s evolved in some other ways in other parts of the brain to receive pain.”

A study in the journal Applied Animal Behaviour Science found that fish who are exposed to painful heat later show signs of fear and wariness—illustrating that fish both experience pain and can remember it. 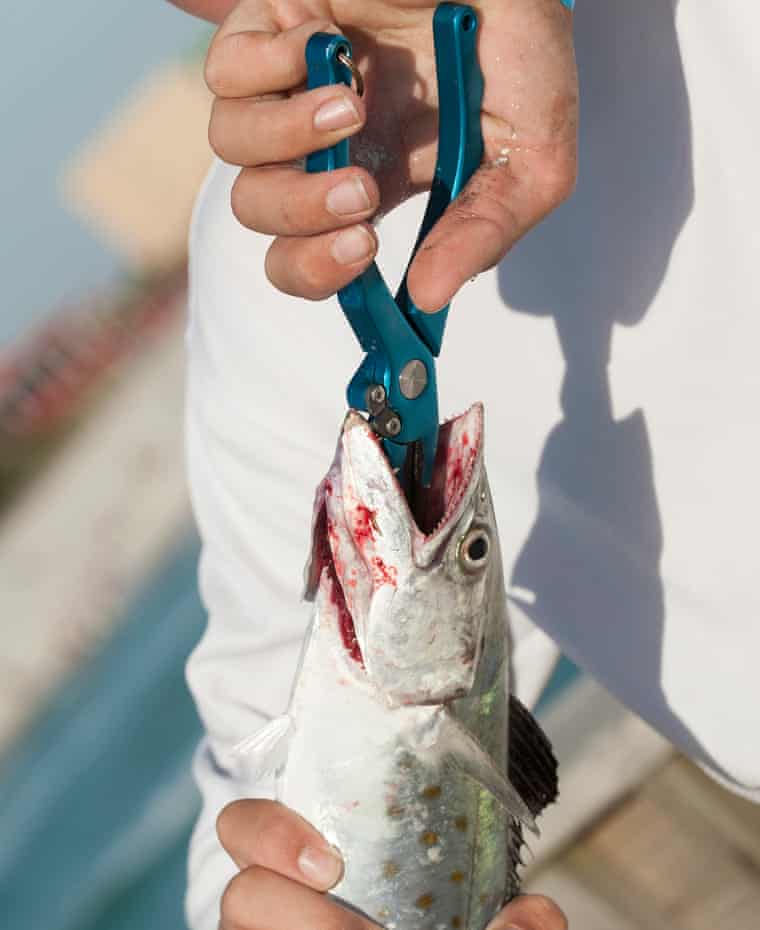 Dr. Culum Brown of Macquarie University, who reviewed nearly 200 research papers on fish’s cognitive abilities and sensory perceptions, believes that the stress that fish experience when they’re pulled from the water into an environment in which they cannot breathe may even exceed that of a human drowning.

“Unlike drowning in humans, where we die in about 4–5 minutes because we can’t extract any oxygen from water, fish can go on for much longer. It’s a prolonged slow death most of the time,” he says.

As a result of his research, Dr. Culum Brown concludes that “it would be impossible for fish to survive as the cognitively and behaviorally complex animals they are without a capacity to feel pain. The potential amount of cruelty that we humans inflict on fish is staggering.”

And I mean…For a long time, it was said that fish had no nerves in the oral cavity and generally felt little or no pain.
But according to the latest research, this groundless belief is over.

As Dr. Lynne Sneddon from Liverpool University reported a year ago in the journal “Philosophical Transactions of the Royal Society B” (DOI: 10.1098 / rstb.2019.0290) that a lot of fish can feel pain – also and especially in the mouth.

It does not matter whether a fish “only” feels pain or whether it also associates an “emotion” with it.
As long as there is even the possibility that it is so (and it is highly likely), it is ethically and morally unjustifiable to subject an animal to torture purely out of ignorance and only for one’s own (useless) gain.

Humans can only afford this discussion because they are the stronger ones in the pack. Unfortunately, the “ethics of the ruler” were not only practiced by the inhabitants of Germany a few years ago.
That should be enough of a warning to never again invoke the right of the strongest for your own benefit.

Fish feel pain. And the human species is what causes it

Therefore: do not fish, do not eat any fish.