Bullfight in Esquivias endangers public health!
This summer we have not stopped working for animals.
In addition to holding street protests in the main cities of Spain, we have infiltrated the bullfights that continue to be organized, despite the health crisis.

We were witnesses of savagery in Salamanca and denounced.

And now we bring to light these images of the bullfight on August 21 in Esquivias (Toledo).
We have placed the corresponding complaints in the hands of the authorities.

It broke our hearts to witness the Forajido killed in the square.

There is no greater pain than seeing a helpless and bewildered being suffer, unsuccessfully seeking the help of those who applaud every time he bleeds.

We believe that it is important to make these images known, no matter how harsh, so that his death is not in vain.
We live days of uncertainty in a country in crisis and some prefer to continue torturing animals to death instead of working for better normalcy.

Did you know that extraordinary items are still being allocated to rescue bullfighting?

They touch 7.3 million euros and Madrid leads the ranking of the communities that will give the most money to the sector, with up to 4.5 million euros.

It is outrageous!
We are working so that bullfighting is condemned by society and its rejection increases.

Only by joining forces can we ensure that it continues to decline and achieve its abolition once and for all.

Only with you, we are stronger! We need your help now more than ever to confront the powerful bullfighting lobby in Spain.

And I mean… “If bullfighting is an “art form,” then so are ritualistic cult killings.
If bullfighting is “authentic religious drama,” so too is war and genocide.
If the matador is ennobled, let us praise every mass murderer” (Steven Best)

This is subsidized animal cruelty – nothing less.

Perhaps someone will soon come up with the idea of ​​reviving the witch burnings, which were well attended in the Middle Ages and very popular by bored audiences.
This was also a sad culture in Spain!

Except for a few mentally weak proletarian Germans and a few brain-sick Europeans, this form of “culture” really doesn’t even resonate with the dumbest of the very dumb.

We can be sure that every day there are more and more animal lovers and animal rights activists (= antitaurinos) who see this massacre as a disgrace for their country and want to abolish it. 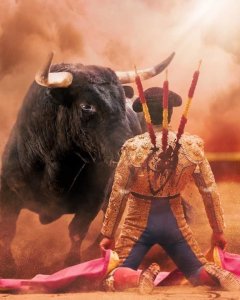 Time is ticking for the animals and we know, it will end.

My best regards to all,  Venus