Despite the ban on the ivory trade, tens of thousands of elephants are killed for their tusks every year.

In a South African national park, a poacher has now paid for the hunt with his life.

A suspected poacher has been killed by elephants in South Africa’s famous Kruger National Park.
The man and two accomplices fled from park rangers and came across a herd of elephants with cubs, said the Sanparks National Park Authority on Sunday.

The elephants would have trampled the man to death.

One of the accomplices was arrested while the third man escaped, it said. The rangers were also able to retrieve a rifle, an ax, and a bag with supplies. The search for the third suspect continued on Sunday afternoon.

Despite an international trade ban on ivory, tens of thousands of African elephants are killed for their tusks every year. According to the IUCN animal welfare organization, there are still an estimated 415,000 elephants on the continent.

The Kruger Park is one of the main tourist attractions in South Africa and is one of the largest national parks in Africa.
It is about the size of the state of Hesse and is known for a large number of wild animals such as elephants, lions, rhinos, leopards, and buffalo.
The last time there was a similar incident occurred in 2019 in which a poacher was trampled by elephants and eaten by lions.

And I mean...Wonderful, we like to hear such news!
Finally, someone is doing something against poachers. We humans don’t manage to fight them effectively!
If people had such social behavior as the elephants, we would all have no more problems.

Unfortunately, it hits the weakest link in the chain, and not those who are enthroned as heroes above the dead elephant and even publicize the murder on photos. 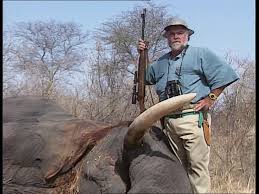 And now we keep our fingers crossed for the Spanish bulls.