The slatted floor is littered with feces, the animals are completely covered with excrement.

The new insights into a large company in Upper Austria show the real picture behind the scenes of the advertising phrases.
According to their own statements, around 700 animals live in the calf fattening area.
All live on fully slatted floors in bays with no outlet to the outside.

The shit is all over the body. Calf diarrhea sticks the animals’ fur.

Light-colored diarrhea sticks to the flank of a calf, in other places it covers the floor. The calves have to lie down on this completely filthy slatted floor to ruminate and sleep.
In many bays there are no dry and clean lying areas at all.

Some calves also appear to have skin diseases and bald spots on their bodies.
The coughing of several calves can be heard over and over again in video recordings (see below) – life on and in their own feces attacks the calves’ respiratory tract and lungs.

some animals suffer from skin abnormalities

On the website, the company advertises junk sales with statements such as: “Here, in your new quarter, you lie on warm rubber mats with a split floor so that you always have it dry and clean.”(!!!)

In reality, the calves live on a completely shitty, fully slatted floor, in many places even without rubber mats.

“The calves are kept in small groups to meet their need for social contact. Because a healthy, happy calf wants to cuddle and play! “

The calves are kept in pens with 20 to 30 animals. There is no space to play – there is no activity material.
Even older calves were documented suckling metal bars – a substitute behavior out of boredom and frustration or to satisfy the need to suckle after separation from their mother. 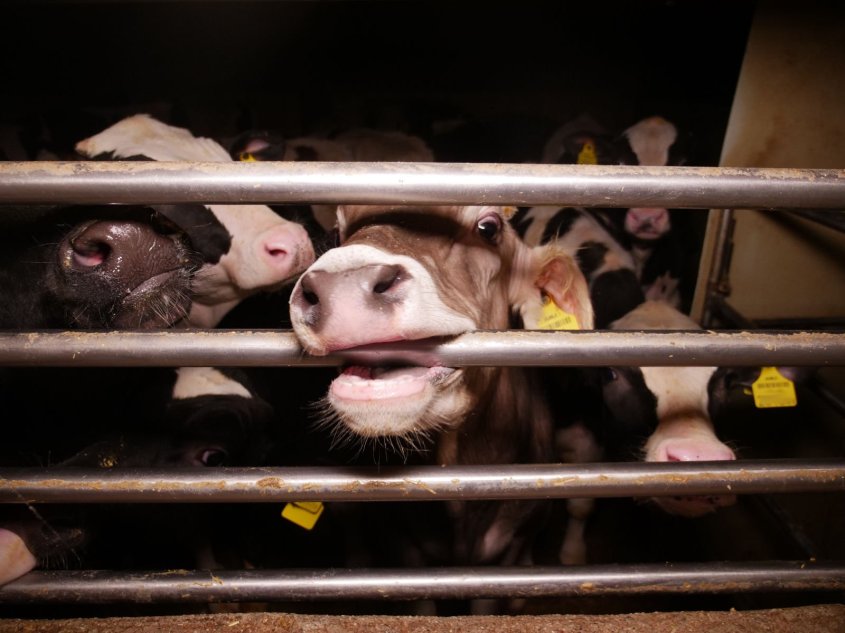 The calves, who are only a few weeks old, lick the iron bars desperately. They have absolutely no employment opportunity in the desolate hall.

In just a few weeks, the milk calves are transported from their birth farms (dairy farms in various Austrian federal states) to the fattening facility.
For some calves, this transport goes via intermediate stations like in Salzburg instead of the shortest route to the fattening.
The calves do not get breast milk.

They are fed with mixtures of emulsifiers, flours and, for example, Polish whey powder.
Instead of fresh grass and hay, they are offered a shredded mix of straw and meal. This is not a natural diet! 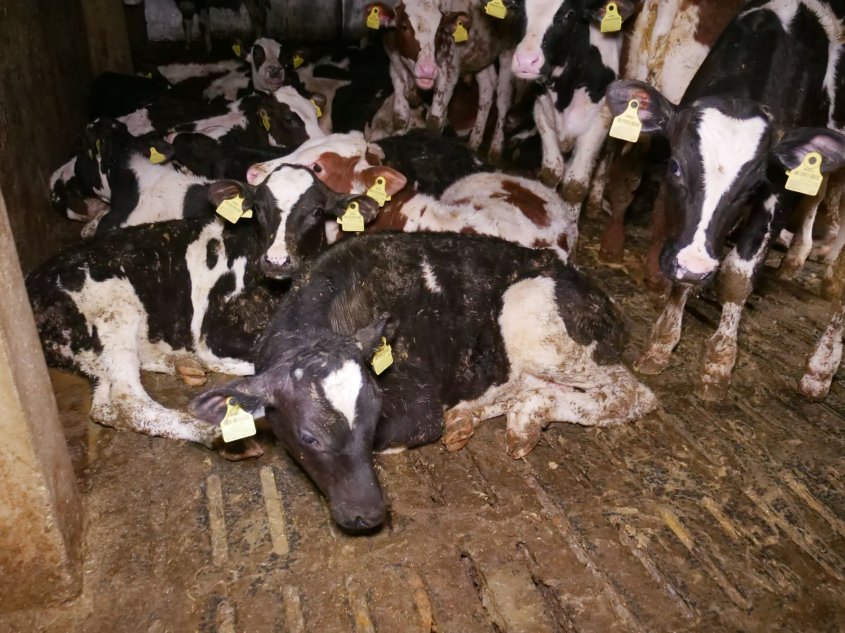 The calves have to lie down on the dirty floor to ruminate and digest. They have no other choice!

The milk – veal fattening system as part of it

The calves kept on the farm were born from dairy cows so that they could continue to give milk. Because cows only give milk when they have given birth to a calf.
As male descendants of performance breeds that focus on milk production, these calves are no longer needed in the dairy industry.
They end up in the calf fattening area, where the young animals are killed before they are six months old.

David Richter, VGT (Association against animal factories) campaign manager, said:
“This case shows the audacity of the animal husbandry industry. Reality is not shown, it would probably scare off and shock consumers.
Instead, an advertising text is presented that is hard to beat in terms of audacity.
I find the website content of this company to be a really outrageous deception!
And here it becomes clear again how badly animals are legally protected in Austria.
Actually, you can’t believe what is allowed in this country and what is done to the animals behind closed stable doors. “

The VGT has filed a criminal complaint with the competent authority.

And I mean…The livestock keepers keep animals for economic reasons.
So animal suffering is the collateral damage of their business.

What happens to animals happens for lower motives: greed for profit for the meat industry – and to meet the consumer’s greed for food.
In addition, always insidious!

But this company in Austria is only one example of industrial practice.
Most fattening farm owners find it completely okay, or not cruel enough, to keep animals as slaves and deliver small calves or pregnant cows to the slaughterhouse.

To put pigs 4 months old in cages in which they cannot turn around, to take the children away from the cows’ mothers, to beat surplus newborn piglets to death on the floor and when they have exploited cows enough, have them brutally killed at the slaughterhouse to make the last bit of money.
And that is subsidized with billions!

In addition: If we do not end the animal agony industries as quickly as possible, or ideally immediately, the whole system on this planet will not have a future … because the biosphere will then collapse in the medium to short term.

The climate will collapse, antibiotic-resistant germs, super-bugs, viruses and zoonoses will contaminate everything, the last remaining rainforests will be irretrievably destroyed, death!

Is that actually that difficult to grasp?
MORE than obvious and visible it has long been!

One thought on “Calf fattening in Austria: Animal suffering and fraud”