The sight of young foxes playing is one of the most beautiful pictures that our domestic animal world has to offer.

Very few people know, however, that many fox pups are already shot by hunters in their parents’ den or caught in trapping instruments such as the so-called “young fox trap” and then killed.

Fox pups do not have a closed season in most federal states!

Foxes are hunted in most federal states without a regular closed season.

Hunters kill them during the mating season, during the gestation period, while rearing the young, while migrating in search of a territory.
They are hunted with traps and bitten out of their den with dogs, the supposedly safe haven for the birth of the puppies.

The highly social animals are kept captive in barren kennels in order to train construction dogs on them. They are victims of driven hunts and are tracked across territories during fox weeks.

Every year well over 400,000 red foxes in Germany die from hunting – five million in the last eleven years!

Foxes can neither be used as food, nor is the fur of these beautiful animals sold.
About 97 out of 100 foxes killed are thrown into bushes or, at best, buried.

This is neither ethically responsible, nor is it a reasonable reason in terms of the Animal Welfare Act.

A very nice article about it:

Engineering structures for foxes: they are artificial dwellings built by hunters themselves, which serve as camouflaged traps, and trick their victims into a deceptive idyll that they are safe from persecution.
So sure they will start a family here and raise their young ones. 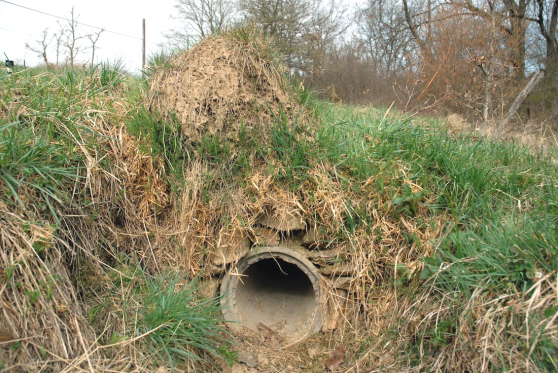 The whole thing works like this: “Sharp” hunting dogs, which have previously practiced on a captured living object, are sent to the burrow to scare the animals out
The young animals living there are eliminated and their parents chased outside. The murderers are already waiting at the exits with their rifles loaded.

They usually have an easy job.
From these short distances, even half-blind geriatric heroes, who might have gone hunting under the SS hunter master Herman Göring, rarely shoot wrong, of course.

Screenshot from the website of a leading provider of fox structures. The construction is as simple as it is effective. The fox hardly stands a chance when the hunting hunt comes to visit. He has only one escape route, and the shooter is lurking at the exit. The animal then probably no longer hears the bang. But neither is the hunter.
He is allowed to use silencers.

Often, however, the dog and / or fox are only seriously injured in their argument.
Then the dog is nursed back to health and the evil robber is shot.
In the relevant forums you can read about what first aid equipment the actors carry with them for “Case X” in order to be prepared for all eventualities.
Which proves that hunters are quite capable of empathy with certain fellow creatures…. As long as they are on the right side and are efficient.

But the whole thing obviously fun.
Not so for the foxes, but for the hunters.
And a murderer cannot spoil this fun.
Relevant video contributions that document this special kick can be found in abundance on the Internet.
It cracks and fucks like in a western.
Dramatic background music, tension build-up, slow-motion sequences….

The animal hit in the jump sails to the ground in slow motion, garnished by a fine, bloody spray.
The successful Sagittarius shines with happiness.

The “easy-care” artificial construction models that are currently available in stores minimize both the risks for the dog and the chances of survival for the “target persons”.

They are simple but ingenious constructions that initially offer their sub-tenants a lot of comfort.
They are dry, warm and without drafts and, at the customer’s request, even have a telephone connection, a “tree detector”.
He calls the murderer on his mobile phone as soon as a fox has made himself comfortable inside.

A real, toll-free hotline.
“Please hold the line”!
The notification is free of charge.

If they have a choice, foxes always prefer such quarters to natural housing.
They are built in such a way that direct contact between the hunter and the hunted is reduced to a minimum, which significantly increases the chances for the dog to survive the action unharmed.
Especially since the victim, because it’s so tight inside, cannot take up an appropriate defensive position.
The prey is only frightened.
In this context, the murderers speak of “blasting times”.
It takes 10 to 30 seconds to get the animal on its feet.
And there is only one escape route left.

The shooter lurking outside only has to keep an eye on this single exit and not several at once, as is the case with natural structures.
That makes a lot of things easier for the murderer.
And a short time later the cave is ready for use again.

The sporting execution discipline of construction hunt, as mentioned, may only be practiced in artificial and purpose-built structures.
Not in natural hiding.
But what is not, can still become. If the state government continues at this pace, it will.

Does that sound absurd?
But the justification of the Research Center for Hunting and Game Damage Prevention (FJW) is even more absurd.

How “scientifically” and “well-founded” one works and researches in this facility is shown by the reasons given by the FJW, why they consider a comprehensive fox killing in buildings to be urgently necessary and mandatory.

Because: Foxes, whose population is also constantly increasing, are ultimately responsible for the decline in many small game species.
That is why they have to be hunted harder than before

Certain interest groups have been peddling (successfully) these and similar manslaughter arguments for many years without having gained plausibility as a result.
But that does not concern the demagogues.
You can try it. Maybe someone will believe it.
The strong arm of the hunter lobby reaches far!

There is also not just a single scientifically sound research work on which one could attach the above-mentioned steep theses.
This is particularly true of the bold assertion that more intensive fox hunting would have a stabilizing effect on populations of endangered species. This is just as nonsense as the argument that hunting can significantly reduce the fox population.
The opposite is the case, as scientists and wildlife biologists can show.

The more vehemently these animals are chased, the higher their reproductive rate.
They compensate for the losses through more births and / or increased immigration. Nature arranged it that way.

Adult foxes that are involved in the rearing of their offspring are not officially allowed to be hunted from March 1st to July 15th.
“Maternity leave” applies to them.

But the law leaves room for maneuver.
This restriction becomes obsolete if there are no young people to look after for the elderly. You just need to get rid of the puppies and then you have a free shot.
The grace clause does not apply to baby and young foxes.
It is always hunting season for them.
If you shoot the minis first, which is legal at any time, then mom and dad can also be targeted.
But only then. As simple as that.

Therefore the plausibility question arises. Anyone who cast these murderous provisions into paragraphs must have had unlimited access to excellent drug.
You can’t come up with something like that with a clear head. On the one hand, parent animals are placed under protection for several months so that they can raise their young, while these young are also considered fair game and can be killed at any time.
This logic is probably only revealed after several bottles of whiskey.