Eyewitnesses found that reptiles were denied basic care, left to suffer with gruesome injuries, and cruelly killed at a PetSmart supplier.

PETA eyewitnesses spent a combined 15 weeks at the facility, documenting systemic abuses and deprivation inherent in the pet trade.

Emaciated, severely dehydrated animals desperate for water. Animals cruelly killed by being gassed or frozen to death.
We’ve seen it time and time again at dealers that sell animals to pet stores, and now we’ve seen it again at Reptiles by Mack, a reptile mill in Xenia, Ohio, that breeds and sells frogs, lizards, turtles, and other animals to pet stores across the country, such as PetSmart.

For many animals, the stress and suffering started even before they arrived in Ohio.

Animals were shipped from all over the world in barbaric conditions: crammed into plastic two-liter bottles, one-gallon milk jugs, mesh bags, and wooden crates separated into tiny compartments like egg cartons.

Many were dead on arrival—having surely suffered tremendously during capture and transport, and workers carelessly cut open the containers with box cutters.
At the other end of the journey—when animals were shipped out to PetSmart—conditions were equally harsh. Animals were shipped in plastic containers resembling restaurant “to go” boxes.

One of PETA’s eyewitnesses saw hundreds left packed up for over 24 hours—without a drop of water or a scrap of food—before finally being subjected to shipping in all kinds of weather. 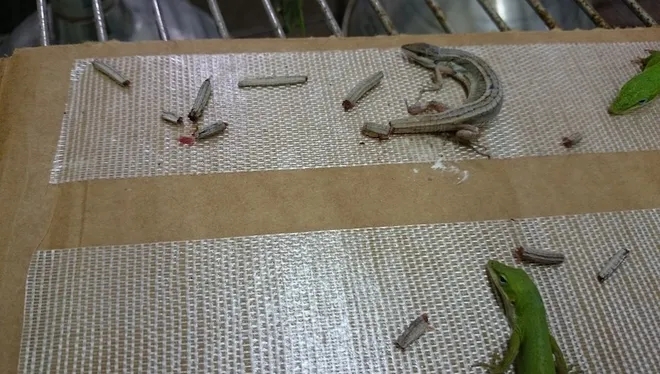 ‘No Empathy for the Animals’
Tens of thousands of frogs, lizards, turtles, snakes, bearded dragons, and other reptiles were kept at the facility at any given time confined to barren, filthy, crowded plastic tubs and deprived of even the most basic necessities, such as heat and UV lamps, veterinary care, fresh food, and even water to drink and soak in.

One supervisor told an eyewitness that tortoises were intentionally deprived of water, despite his repeated complaints. Upper management had “no … empathy for the animals,” he said.
“They just really run it like a business.”

One manager instructed an eyewitness to clean light fixtures in preparation for an upcoming, announced visit by a PetSmart representative instead of providing tortoises with the water that by his own admission, they needed.
Many bearded dragons’ only source of “water” was shriveled-up leafy green vegetables. 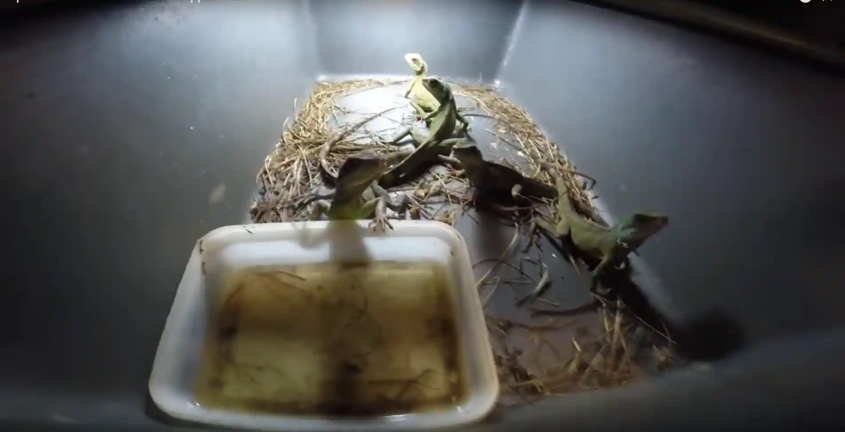 One of the eyewitnesses documented that lethargic, dehydrated bearded dragons clamored for water and drank continuously, for up to four minutes, when he offered it to them.

Injured limbs left to rot off
Severe crowding and intensive confinement led to gruesome injuries. Many water dragons spent so much time struggling to get out of the cramped tubs that they rubbed their snouts raw, some so extensively that their teeth were visible through the wound.
Some lizards did manage to escape but were later caught with makeshift glue traps set by the staff.
The traps often went unchecked for days, and many lizards were dead by the time they were found. One lizard’s tail broke into 11 pieces as a result of thrashing and trying to escape.
Live animals were often carelessly yanked off the sticky boards.

Severely crowded bearded dragons fought for food, leading to mangled limbs, some left hanging by not much more than a thread of damaged tissue.
Even the most grotesquely injured limbs were haphazardly slathered with Neosporin, at most, or just left to rot off.
One worker said that he had cut off a bearded dragon’s leg with wire cutters and “snap[ped]” off their tails with his fingers.
PETA’s eyewitnesses often found emaciated, lethargic animals who likely weren’t able to compete for food.

Setting animals aside to die and waste away
The facility’s contract veterinarian purportedly visited the facility weekly, but PETA’s eyewitnesses never saw him and were repeatedly told by supervisors that the veterinarian would not examine or treat the animals they were concerned about.
One supervisor said, “I’m not really sure on what he even f***ing does, honestly.”

One eyewitness persisted for three weeks in trying to get care for a lizard with an infected abdomen but to no avail. She was finally killed the day before PetSmart’s representative came by, presumably so she would not be seen.
Another animal, a gecko with a maggot-infested oral infection, suffered for days before finally dying without any desperately needed veterinary care.
A supervisor said that he left sick snakes to die of starvation rather than put them down, admitting that “it sounds mean.” One supervisor described the facility’s SOP as “setting [sick animals] aside to die and waste away.”

Some severely injured and ill animals were left to suffer for days with no food or water in a barren “put down” tub until a manager was finally available to kill them, at which time they were stuffed into plastic “poop bags,” gassed with carbon dioxide, and then tossed into the freezer.
A supervisor told one eyewitness that he’d even found gassed animals trying to escape the freezer.

Altogether, PETA’s eyewitnesses documented the deaths of nearly 675 animals in only two of the company’s many departments over the course of just three months.

In late 2015, PETA alerted the company’s president, John Mack, to the abuses our first eyewitness found.
We were assured that glue traps would no longer be used at the facility.
We were also told that the facility had “secured on-site veterinary treatment for our animals, that approved AVMA euthanasia methods are used, that all animals have the necessary access to water, species-appropriate lighting and clean and appropriate living conditions.”

Despite the president’s claims, a second eyewitness found that Reptiles by Mack workers had continued to deprive animals of veterinary care and adequate water and had begun to permit only managers, who do not work on the weekends, to kill animals, which had the effect of allowing dying animals to linger in barren “put down” tubs for up to several days before someone finally arrived to gas the surviving ones.

PETA has submitted its evidence to local authorities for investigation.

And I mean...PetSmart released a statement asserting that…

“Nothing is more important to us than the health and safety of pets, and we take these allegations very seriously.”

As the leading retailer in its industry, PetSmart said it takes pride in setting high levels of care.

“We hold ourselves and all of our pet suppliers to the highest standards,” the statement continued.
“We are reviewing the matter internally, and if we find that our standards have not been met, we will take appropriate action immediately.”

People who made animal exploitation and cruelty a business aren’t just professional killers.
They are professional liars too.

Yet it continues to sell animals and do business with these mills.