(CNN) A Utah animal trainer is recovering after the alligator she was feeding during a girl’s birthday party chomped down on her hand and refused to let go until after one of the adult guests jumped on its back to help her.

Lindsay Bull, 31, said that she’s fed Darth Gator hundreds of times in the past, but the 8-foot-6-inch long star attraction at Scales and Tails Utah was being a little pushy on Saturday when she opened a plexiglass door to his enclosure.

Video of the incident showed Bull giving the American alligator the command “back” and then pushing the 150-pound reptile under his jaw when he tried to climb onto the platform in his enclosure.

Bull says she hasn’t watched the video, but she thinks her left hand slipped away and the alligator grabbed it in a feeding response.

“Everything was going pretty normal, nothing unusual for interactions between me and Darth,” Bull told CNN. “But anybody that works with animals like this knows that there’s a chance that something can go wrong.”
At first, she thought the alligator would do a quick bite and release, but then she felt it bite down harder.
“He thrashed and at that point, I realized this is going to be a serious, potentially really big injury,” she said.

Bull climbed into the alligator’s enclosure and wrapped her legs around him because she wanted to be able to move with him in the water. She feared that if she was standing on the ground when the alligator started to roll, the force might rip her arm off.
Within seconds, Donnie Wiseman shouted for help before scrambling into the tank and jumping on the alligator.

“It was like instant relief. For a minute, I’m there going through this by myself and then all of a sudden, Donnie was up there on the platform yelling at me, ‘what do you want me to do?'” Bull said.
“I can’t imagine that it was easy for him to jump in and jump on his back.”

Wiseman showed CNN Salt Lake City affiliate KUTV the scrapes and scratches on his torso from the alligator’s scales and said Bull remained calm throughout the entire ordeal.

“I was scared for a minute, but she was so professional and trained and knew what to do in a situation like that. I’m glad she was there,” he told KUTV.
“A crazy situation. I’m really not sure what to say, I’m just glad that girl’s OK.”
The alligator eventually let go and Todd Christopher, another guest, was able to grab Bull under her arms and pull her out of the enclosure.
The gator thrashed a bit before Wiseman was able to climb off its back and get away.
CNN has been unable to reach Wiseman.

“Anytime something so traumatic happens like that, I think just having somebody there with you, is a comfort no matter what they’re doing,” Bull said.

“But the fact that they were on it, and were doing what I needed them to do to help save me from that situation was just, yeah, they’re incredible.”
Christopher’s wife, Amy, has a nursing background and was able to treat Bull’s wounds until the EMTs arrived.
Bull suffered tendon damage and had chipped bones in her wrist and hand. Doctors operated on her hand on Saturday and put her on an aggressive antibiotic treatment to prevent infection, Bull said.
She’ll have to have physical therapy, but doctors told her she should regain full use of her hand.

Bull said she’s been fascinated by alligators since she was young and has gotten to work with Darthgator at Scales and Tails for about three and a half years.
She said she loves the guy, even though he is territorial and can be kind of a jerk sometimes.
Scales and Tails Utah owner Shane Richins told CNN that they bought Darthgator from a breeder in Florida in 2009 when he was less than a year old and that the alligator has grown up at the facility. 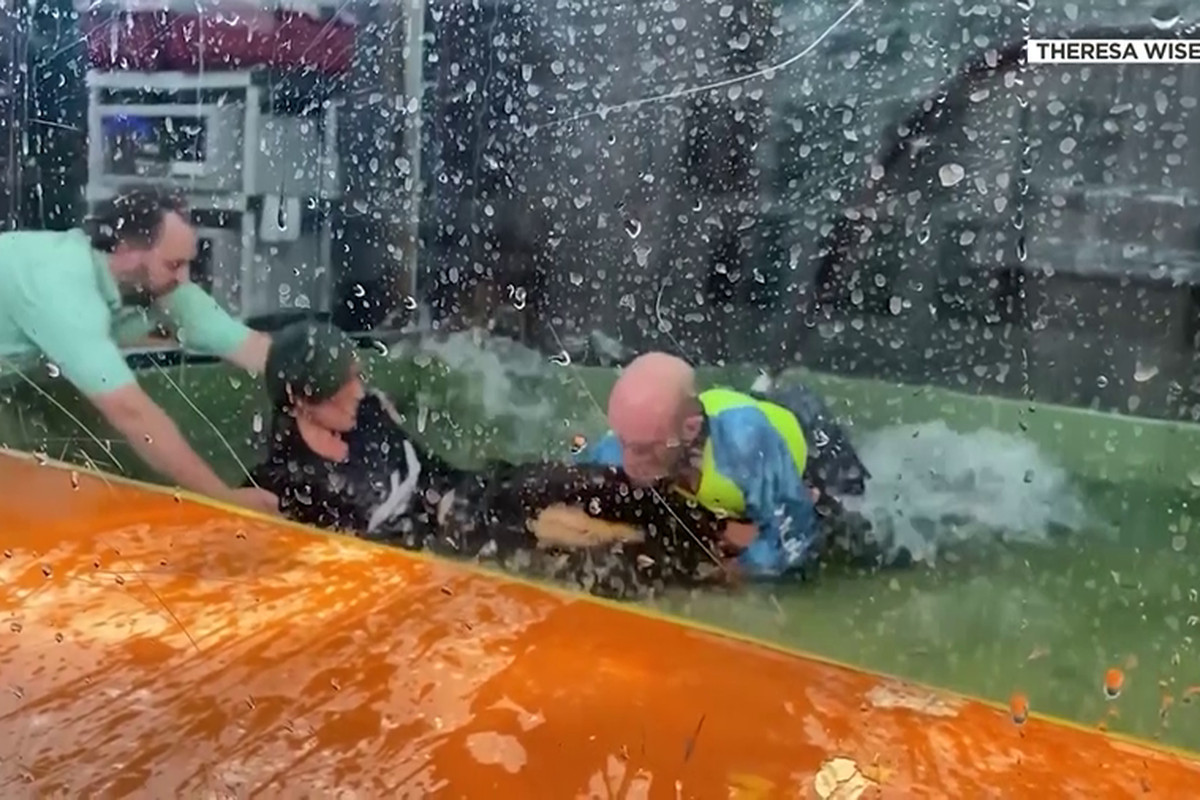 Richins said he’ll file a report on the incident, but doesn’t expect anything to happen to the alligator.

“We know the risks when we step in to do these shows and that danger element is an attraction which helps us get out our educational messages.” (!!!)

A spokeswoman for the Utah Division of Wildlife Resources told CNN that the facility had a certificate of registration for the alligator and that the agency is reviewing whether there were any violations.
Bull said she wants to get back to working with Darthgator as soon as she can, but she knows she’ll probably be a little nervous, and hyper-vigilant at first.

“I can’t wait to get back in and hang out with my buddy again,” she said.

And I mean…Alligators have been on Earth since the time of the dinosaurs. They should be respected for the fascinating beings that they are, not as a birthday party prop

An organization called Scales and Tails Utah cares less about animals and wants to make money with Darth Gator
The procedure went like all slave owners do: catch the animal at a young age, separate from its mother and its natural environment, forcibly exist in a small tank, while stupid people and their offspring stare at him and take photos of it.

That was the life of this apex predator.
Until he was fed up with it! he grabbed his trainer’s hand in his mouth, dragged her into the pool and locked her in a deadly twist; media and society are shocked: why did the birthday party have such a bad ending?

This was Darth Gator’s first attempt at revenge
We can’t wait for the next time the Darth Gator doesn’t do things by halves, but a clean attraction
After all, he is a top robber who bears full responsibility for “the element of danger in an attraction” and for helping Scales and Tails Unah “getting out their educational messages across”.